Last Night In the D-League

Share All sharing options for: Last Night In the D-League

Welcome to RidiculousUpside.  Here at RU, we rarely have to stick our foot in our mouth (rarely as in never, as I'm not nearly that flexible).  Today, however, I need to apologize to Jim Hlavac.  Last week, I called out Mr. Hlavac out for his ridiculous D-League "call-up" rankings.  Turns out, they weren't quite as ridiculous as I thought.

If I would've been able to watch the whole show (Damn you, North Dakota, for not allowing me to have NBATV), I would have found that the rest of the show included a feature on Mike Taylor, the D-League's draft eligible du-jour.  This makes sense why Jim would have talked about Trey Gilder and Keith Clark, as they are also both draft eligible, though not call-up prospects.  He also watched Sun Yue in person in his first two D-League games, which makes sense why he was looked at as well.  Jim - my bad.

However, even with this gaffe on my part, in my emails with Jim, where I profusely apologized, he gave me a great idea - which I stole, for last weeks version of the NBA call-up's list.

In other news, there were five D-League games last night.  I'm working on several things for this week (interview with Dontell Jefferson, who just received a second 10-day from Charlotte, a story on twittering/blogging, putting some questions together for a few other D-Leaguer's, etc.) along with watching inordinate amounts of college/high school basketball, so I slacked on my D-League watching over the last two nights.  Sorry.  Should get better tonight. 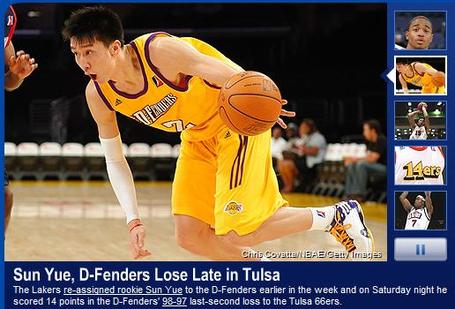 With the D-Fender's up five and nine seconds left to play, Gary Forbes hit a 3-pointer to bring Tulsa within two.  WAIT! Sun Yue foul!  Hard foul! Forbes makes the free-throw, brings Tulsa within one with nine seconds left to play!  A D-Fender makes one of two free-throw's to move LA's lead back to two, but Tulsa's Moses Ehambe makes a 3-pointer with the clock waning!  Tulsa wins the game, rather Sun Yue's EPIC FAIL loses the game for Los Angeles.  Correctly, the D-League moves him to the second biggest story.  "Take that, Sun Yue," is what I presume the D-League webmaster said as he did this about Sun Yue.  Sun Yue.

If you're looking for more recaps, check here for the Bakersfield game or check out a Colorado-Dakota recap after the jump from somebody that actually watched the game, 5280fan.com!  Good stuff!  Among the highlights, Romel Beck picks up a technical foul apparently for jawing with the crowd and they love D-League refs.  Yikez!

Vicki and I sat in our usual seats just behind courtside tonight. We got to the Broomfield Event Center early to listen to ex-Nugget Mark Randall speak about his career and his position with the Nuggets now as a Player Ambassador. It was a unique hour of give and take questions about life and more. Very interesting. But I digress.

The game itself was both high and low all in one. With four lead changes and the score tied six times the final box scores don't really show the exciting game between the 14ers and the Wizards tonight in Broomfield Colorado.

Blake Ahearn and Romel Beck for the Wizards quickly opened up a big lead and the Wizards were pulling down just about everything on both ends. The 14ers were simply unable to score, missing simple layup after layup and shooting 1 for 8 for 3's and they were getting calls, but just unable to make the free-throws. On the other end though the Wizards were hardly missing anything at the line, shooting a sizzling 91+ percent for the night on 33 of 36. It was a difficult first half... despite the fact that JR Smith from the Nuggets arrived to watch some ball and offer his support for Sonny Weems and others. By the time the half was done the 14ers were down by 18. Heads hung low as they went to the locker room.

The second half was simply night and day. Not sure what was said at half-time, but the start of the second half brought Dominique Coleman to life shooting 13 of 20, pulling down 9 boards on his own with 8 steals for good measure. Everyone stepped up their game. Billy Thomas finished with 22 and Sonny Weems had 14 as the whole team cranked out an amazing 72 second-half points.

Romel Beck for the Wizards cruised with 30 points and 7 assists while Maurice Baker and Blake Ahearn chipped in 22 each. But it wasn't enough to hold the 14ers down.

Things got a little interesting in the fourth as Beck and a friend of Jr's exchanged some "building" comments... something about "bricklayers". There were a few techs but nothing serious as the 14ers paved the way toward their playoff run.

The game ball was presented by Miss Colorado and Miss Teen Colorado.

Vicki and I were fortunate to spend some time after the game speaking with Mr. Kevin Carr who is VP of Community and Player Programs for the Development League. It was a unique chance to ask some questions about the League and offer some personal observations about being Fans of the D-League. We exchanged contact info and plan to discuss more topics in the near future. 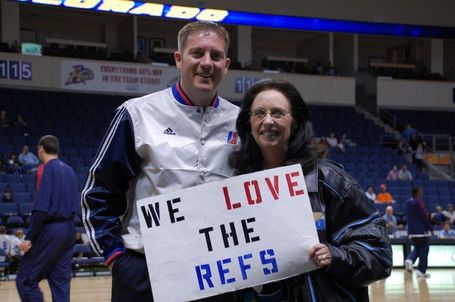 Vicki and Ref Brent Barnaky, who I have no opinion of good or bad, so it might make sense to love him.  If they would've picked Ben Taylor, I wouldn't have stole this picture!