Not again! Rick Kamla does show about top 10 D-League Prospects

Share All sharing options for: Not again! Rick Kamla does show about top 10 D-League Prospects

I'm working on a bigger post for later today and I had a bit of a game thread going for last night's lone D-League game, plus I thought you may want to read a bit more about my impending death with the blizzard/flood of 2009 creeping closer to myself, so this morning, I'll just break down the work of Rick Kamla on NBATV.  Gross. 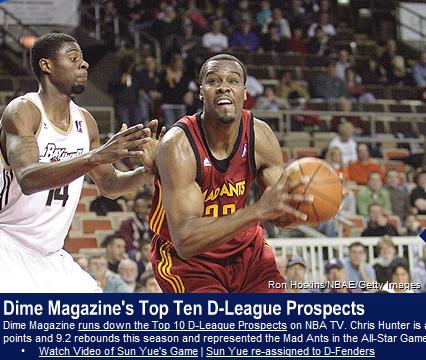 Of course, my favorite part of that screenshot is the bottom: It has nothing to do with this, but you can watch video of Sun Yue's game PLUS Sun Yue was re-assigned to the D-Fenders.  Kudos, D-League, I wondered where all the Sun Yue coverage had gone!  Sun Yue!

To give you a little background, I have to have respect Ryan Blake (as much as I didn't like him on the D-League's pre-draft show), as his dad, Marty Blake, has done excellent work for many, many years.  Marty, along with Eric Chapman and Jim Hlavac, are the top minor league scouts - someday, I'm planning to the fourth.  Mr. Kamla, on the other hand, was a noted fantasy basketball guru before taking over the NBATV D-League duties.  I probably shouldn't rip apart Kamla and Blake, as they are reviewing Dime Magazine's call-up rankings, but I'd assume there has to be some better rankings out there (Hlavac would be the best bet, since he didn't get a fair shake last time, but I would gladly let them use mine.  If they would like to publish the Chapman Report, that'd be even better!).  Dime seems to have looked at the stats, or remembered names from yesteryear, but it doesn't appear they really watched (m)any games.

For starters, they don't include Trey Johnson, but they do include Jasper Johnson.  Jasper is not sniffing an NBA roster anytime soon.  When Blake compares a player to Antonio Meeking, it's usually not a good thing, and it especially shouldn't warrant the number two slot out of the top ten D-League prospects.  If it does, why isn't Antonio Meeking included?  Correct me if I'm wrong, but 6'7", 280 pound power forwards haven't fared well in the NBA.  If I was still with the Minot SkyRockets of the CBA, I'd pay big bucks for a lefty undersized power forward, but there's no way he's the second most NBA-ready player in the D-League.

Trey Johnson, on the other hand, has had two 10-day call-ups with the Cleveland Cavaliers this season along with being a couple of NBA camps as well.  If they would have switched Trey with Jasper, it'd be a great list.  Johnson had 20 points and seven assists in a big Bakersfield victory last night.  With his shot, versatility, and potential, there's no doubt he should have been much higher on the list.

At the 10 spot, they include Jared Jordan.  While I liked Jordan at Marist, I don't like him as one of the top 10 D-League prospects.  If they're going with a prospect as being a younger guy, I would have included Walker Russell, who scores seven more points and dishes 2.5 more assists per game, with similarly terrible shooting percentages.  Russell however works harder to create in the games that I've watched, excelling in the fast break.

If they want to go with just any point with a better chance to make the league, I've got two more point guards I'd rank ahead of Jordan on this list: Eddie Gill, who has already had two 10-days this season and is leading the best team in the D-League, or Mateen Cleaves, who played an exceptional game last night, scoring 21 points on 12 shots, dishing 12 assists, and turning the ball over just twice, coming up HUGE when the Jam needed him.

While those are the only two players that I have a problem with their inclusion, they failed to mention a couple players that have equal or better chances at the D-League.  Continue on to see some of the unheralded heroes of the D-League!

Josh Davis - I'm not even going to explain.  It's just dumb they didn't include him.

Othyus Jeffers - the fact that they didn't include him blows my mind.  The 6'5" swingman averages 20.6 and 9.1 rebounds per game.  Over nine rebounds per game and he's 6'5" and not playing in the post and he hasn't even started 15 of the 40 games he's played in.  He's also (in my opinion of course) the top perimeter defender currently in the D-League.

Richard Hendrix - Hendrix was a second round draft pick and is currently a beast for the Dakota Wizards.  He's the league's top rebounder and has oodles of potential.  In 31 minutes of action, he's averaging 13.6 points and 11.6 rebounds.

Dwayne Jones - Jones is an NBA veteran.  He's tearing up the league right now.  He doesn't get mentioned.  This month, he's averaging 15.8 points and 13.5 rebounds in 35 minutes of action, shooting a whopping 61% from the field.

Kurt Looby - I'll admit, even we here at Ridiculous Upside don't talk about Kurt Looby enough.  The 6'10" rookie out of Iowa has been mighty impressive for the RGV Vipers this season, though.  His shot blocking and rebounding is what's going to get him a call-up, which isn't admittedly sexy, and therefore Dime wouldn't have noticed him.  We do though!  In the month of March, Looby is averaging 3.7 blocks and 13.1 rebounds, along with adding 9.2 points to boot.

Dominique Coleman - My esteemed colleague Jon L has recently turned me on to Coleman after incessantly telling me he's better than what I thought he was.  Turns out, he's right.  The problem is, with so many other players on Colorado, it's hard to focus on Coleman.  I went back and watched the majority of a recent 14er game though, and he's impressive.  Over his past 11 games, the 6'3" guard is averaging 18 points, 6.6 boards, and 5.2 assists, shooting a ridiculous 59% from the field.