JamesOn Curry, His Afro, and the night that was in the D-League

Share All sharing options for: JamesOn Curry, His Afro, and the night that was in the D-League 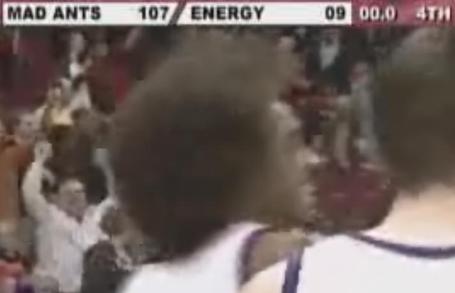 Last night Iowa won a close game, 109-107 over the division rival Fort Wayne Mad Ants.  I think.  President Reed, President Potter: I think we're going to have to look at instant replay in the D-League.  Some sort of instant-archive system at least. 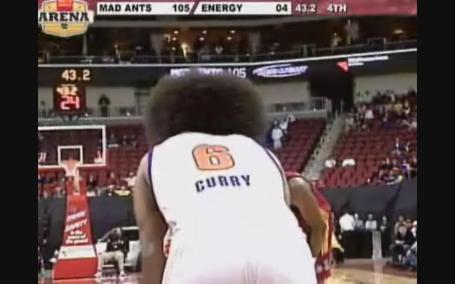 JamesOn Curry And His Afro was thrown a cross court lob from Othyus Jeffers with 1.2 seconds left in the game.  JOCAHA leapt to catch the pass over his head, landed, tripped while taking a couple steps, got his feet semi-set, and hit a fading jumper.  This game was in Iowa, but I'm not going to blame the clock guy, as he may have started it in time - just seems that there's a better than average chance that the play either took more than 1.2 seconds or that he traveled.

Iowa was led by Demetris Nichols, who wasn't even listed on the D-League Transactions page pre-game.  Lucky he made it though, because without him, Iowa wouldn't have had the firepower to compete.  If we know one thing about Demetris Nichols, it's that he just got done costing the New York Knicks roughly $200,000 (his salary + luxury tax) for being on their roster 20 days and not getting an opportunity to show what he could do, even while former D-Leaguer dropped 35 on his Knicks.  If we know two things about him, the second thing is that he can shoot the 3-ball.  Last night was no different, as he hit 6-of-7 of his 3-pointers, finishing with a team high 33 points.

Other notable players for the Energy include Curtis Stinson, who continues to put up Magic Johnsonesque numbers, with 24 points, seven boards, seven assists and five steals,but a disappointing six turnovers; The Great White Hype, John Edwards, who finished with 14 points, nine boards, and big and-one dunk to put Iowa ahead in the last minute of the game; and Curry's huge shot, despite finishing with just 10 points on seven shots in 38 minutes of action.  Othyus Jeffers struggled, scoring just 14 points and turning the ball over six times.  Also, Iowa, you need a bench.

Fort Wayne was led by Chris Hunter, who abused TGWH Edwards to the tune of 29 points and 11 boards.  I'm going to assume he was motivated by the fact that I picked him as the heir-apparent to Tyson Chandler's regular season throne, but he's been capable of putting up those numbers all season.

Other notables for Fort Wayne include Taj McCullough, who had 35 points on 26 shots along with five steals (majority from Jeffers) and Walker Russell, who had 20 points, 12 assists and six (6) (SIX!) steals, but committed five turnovers as well.  Also, Fort Wayne, you're out of the playoffs, so a bench won't be necessary, but it could have helped tonight.

In other news from this game, Marty Tirrell went wild.  When not cursing up a storm, he's actually an exciting guy to listen to - I was impressed.  Also, Steve Newman didn't play.  He did play poker in Reno the other night though, and responded to me after tonight's game on Twitter regarding his luck with a somber "didnt go to well man my pocket aces got cracked by J 9".  So that sucks for him.

Continue on for more expert analysis on the games from the D-League last night.

I was watching the Iowa game (it's too hard to play Day 1 of March Madness and deal with the buffering issues of switching between games), but somehow this game had seven technicals, all in the four quarter, with six of them coming two at a time.  The surprising part?  Marat Kogut was in Utah!  Looking at the box score, there were only two officials, so maybe that was the problem - they just let it get out of control.

Sioux Falls was led by Bobby Jones, who really doesn't get enough credit for his defensive efforts.  If my mancrush wasn't firmly entrenched with Jeffers, Jones would be getting a lot more love on this site.  For the majority of the night, or at least the parts of the game that I watched, Jones had the assignment of defending Marcus Williams, which is no easy feat.  In the box score, Jones finished with 25 points, nine boards, two steals, and drew a charging foul which led to a technical foul on Williams.

Other notables for the Skyforce include Frank Williams, coming off of his one game league suspension from the league, which means it was something that he really shouldn't have been doing.  Williams finished with 26 points and, yuck, one assist from the point guard spot.  Kasib Powell also hada nice all-around game with 18 points, eight assists, and eight boards, on eight field goals and eighteen shot attempts.  Lots of 8's.  Sean Singletary missed another game, due to injury.

Austin was led by Malik Hairston, who was just assigned by the Spurs.  Hairston finished with 23 points and little else.  I'm most impressed with his 3-for-3 from beyond the arc, as that wasn't really something I ever noticed from him in college.  If he can add that consistently, he'll end being a second round steal.

Austin didn't mesh well from all accounts, which may have led to the non-impressive notables.  Regardless, here they are: Dwayne Jones had 15 points and 12 boards, but 10 of his points came in the first half and he hit just 5-of-11 from the charity stripe; Marcus Williams finished with 14 points, eight rebounds, and just three assists, turning the ball over six times - he also shot 6-for-18.  Yikes!

For the record, I felt this one coming.

RGV was led by a team effort.  When that happens, I profile my favorite player on the team - Kurt "My Favorite" Looby.  Looby, who was a darkhorse candidate in my Chandler-replacement post, did what he does last night, apparently making life a living hell for opposing big man Nick Lewis, who finished with 2 points.  Looby himself finished with 10 points, 15 boards, and a disappointing one block.

Other notables for RGV include Jeff Trepagnier with 18 points including four 3's; Jawad Williams who had 23 points and eight boards, but shot just 9-of-22 from the field; and Jared Jordan, who finished with nine points, 12 assists and four turnovers.

Bakersfield was led by Terrance Thomas off the bench, who finished with 17 points and 13 rebounds.  Thomas is from Baylor and has played two seasons in the D-League - the other being the '06-07 season with the Fort Worth Flyers.  Since I don't know much else about him other than him being the garbage man for the Jam, I checked his college bio so you felt you got the most out of this post.  Highlights include his favorite movie being The Color Purple (WHAT!?) and person in history he'd like to meet being Michael Jackson.

Anaheim didn't distribute the ball, Utah had Ronald Dupree finish with 29 points and 10 assists.  This game didn't interest me and it's getting late.  The end.

Idaho was missing Luke Jackson and Roberto Bergesen.  The Reno recap wasn't as funny as it has been in the past (read that - I should not be jobless if someone got paid for writing that) and it didn't include any mention of these two, so Reno gets an 'F' on the night.

Idaho was led by Lance Allred.  I've profiled him quite a bit, so if you don't know anything about Lance Allred, the title of his upcoming book will get you a good synopsis - Longshot: The Adventures of a Deaf Fundamentalist Mormon Kid and His Journey to the NBA. (Note to publicist - send me an early copy - would love to review early).  Allred had a monster game with 21 points and 18 boards, but also turned the ball over six freakin' times.  Gotta limit the turnovers, big man.

Other notables for Idaho include the fact that every other player except Jason Ellis got into double figures in scoring.  Good team effort fellas, but I thought you only played for yourselves.  Nate Jawai, as I've reported here before, must have been wrong.

Reno was led by David Noel, who is quickly moving into the lead for being the better player in the dumbest trade in the D-League (for Antonio Meeking) along with my favorite swingman deserving a call-up soon.  Noel flirted with a second straight triple-double, scoring 24 points, dishing 11 assists, and grabbing nine rebounds.  I assume he probably could have had 10, but I texted Rod Boom Tho Benson before the game and told him if he's going to stand out, he's got to limit teammates triple-doubles.

Other Notables for Reno included Rod Benson with 19 points, five boards, five steals, and two blocks; Russell Robinson, whose Kansas Jayhawks lost yesterday, but he still finished with 13 points, 12 assists and a big, fat, juicy ZERO in the turnover column.  Boom Tho.

Also, I listened to the Notorious B.I.G.'s Juicy while writing these recaps, in case you were wondering.