Tyson Chandler Out - Could a D-Leaguer Be In?

Share All sharing options for: Tyson Chandler Out - Could a D-Leaguer Be In? 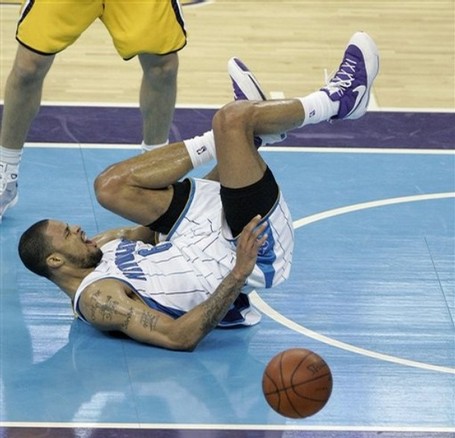 I posed a question to the SBNation Hornets blog, At The Hive, last night on Twitter, wondering if the recent injuries to Tyson Chandler and Hilton Armstrong (possibly - left game early with the 19th Hornets ankle injury this season) could mean possible D-League replacements would be a topic worth blogging about.  Chandler has some sort ankle injury, as he has nearly the entire season, but now it looks like he'll be out for at least a week and some reports are saying the rest of the regular season.  No word on Armstrong as of me writing this.  ATH's reply? "The Hornets HAVE to get someone right? That, or they haven't heard of the D-League."

Well, Mr. Jeff Bowers, have you heard of the D-League?  If so, call one of these guys up.  Actually, since your mostly-healthy bigs aside from David West include Melvin Ely (Melvin.  Case closed), and Sean Marks (whom is my current favorite New Zealander in the NBA, but...), I'd tell you to pick two, but that's not an option with 14 guys under contract.

My first choice would be New Orleans preseason-invitee, Courtney Sims, but he is currently up with the Knicks, so that takes him off the board.

My next first choice is a name we haven't been throwing around often here at RU lately, but he's basically the yin to Hilton Armstrong's yang, Chris Hunter.  Hunter has blossomed this season into one of the most legit big men in the D-League this season - in fact, I talked to a couple coaches that preferred him over the aforementioned Sims.  The third year pro out of Michigan will bang with the best of them, as his 6'11", 240 pound body would more than likely tell you.  Hunter is an able scorer and polished in the post, two things that bode well for the Hornets offensively-inept backups.  He's been averaging 18 points and nine rebounds pretty much the entire season, shooting 55% from the field, but this month he's been getting to the line at a more productive rate, and hitting the freebie's as well - he's made 44-of-49 from the stripe this month.

Next, since he's fresh in my mind after we've talked about him all week, is going to be Boom Tho himself, "Too Much" Rod Benson.  The problem with Benson is he's got the same frame as Hilton Armstrong, which might not bode well for the Boom Tho Movement heading to NOLA.  At 6'10, 225 pounds, he's got a long, lanky, and athletic frame that allows him to block quite a few shots and will certainly help him run the pick-and-dunk with Chris Paul.  If there is one thing Benson's known for, it's his blogging.  If there's two things, the second is most definitely rebounding - he had a massive 28 point, 28 rebound game last season.  In the month of March, Benson's started just six of the 11 games for his new team, averaging 31 minutes of action.  Fortunately, he's making use of all 31 minutes, as he's scoring 15.4 points, grabbing 9.5 boards and swatting 2.7 blocks per game, shooting 61% from the field.

Third on the list is going to be Dwayne Jones, the 25 year old big man that's got 79 games of NBA experience between Boston and Cleveland, along with a bit of run earlier this season with Charlotte.  Jones plays for a stacked team that also features Demarcus Nelson, Marcus Williams, and Malik Hairston, but he's still doing work.  In eight games this month, Jones is averaging 15.8 points and 13.5 boards, shooting 61% from the field.  He's a tremendous defender as well that certainly hasn't seen his last shot in the NBA.

Continue on for two more prospects, as you can never have enough options!

Fourth on the list?  Cezary Trabanski. Jasper Johnson. Jesse Smith.  Just kidding, but still a relative unknown in the world of the NBA - Kurt Looby.  Hell, he barely averaged 4 and 4 in the Big Ten, playing at Iowa last season.  With a good coaching staff this year though, and a recent change of fortunes (he's now getting minutes), he's been very impressive.  Looby didn't play basketball in high school, be he does have a much cooler name than Tyson Chandler (Hilton & Looby.. you love it already).  The 6'10" shot blocking machine grabs a bunch of rebounds as well - in his past 10 games, he's averaging 12.7 boards and 3.5 blocks in 33 minutes of action, averaging less than one turnover per game, which you have to appreciate given the current Hornets butterfingers.  Oh yeah, he also 9.5 points, but they're pretty much dependent on garbage buckets.

Last is big ol' Mouhamed Sene.  Sene should be fairly familiar as he's spent the last couple of seasons on the bench for the OKC-attle Superthunder (See what I did there?), but never really standing out.  Unfortunately, through his first six D-League games, he hasn't stood out either.  The seven footer from Senegal is averaging 9.8 points and 9.7 boards, shooting just 46% from the field.  Fortunately, he is outstanding on defense, averaging 3.5 blocks per game.  Considering he's just 22 years old and both Ely and Marks' contracts come off the books this season, he might be worth a look.

Lance Allred could also be an option.  Regardless, Mr. Bowen, I assume you'll sign Cheik Samb.