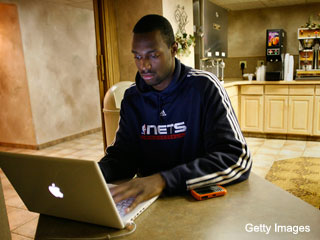 Note from Ridiculous Scott - I asked JRose to get me a rebuttal on my post the other day, because he is basically the yin to my yang.  We can't agree on anything (except our love for being right).  He turned me on to Rod, way back in like 2006, and now, J's a hater.  It is probably the best piece I've read on SB Nation - only downside is it's really long and, well, mostly wrong.  Enjoy!

This is a response to the post from Ridiculous Scott asking whether Rod Benson should quit blogging / Tweeting. While I am a Rod fanboy and hope he gets called up I do think his blog and its popularity does hurt him and I will try to present those arguments here.

First of all, I don’t think Twitter would be much of a problem for any (prospective) athlete, unless said athlete was openly negligent/racist/insane. Obviously what Charlie Villanueva did was stupid; you can’t be Tweeting at halftime. I realize what he did probably took him under 15 seconds and didn’t take away at all from his game. However, the common fan’s perception is either that he is not listening to the halftime adjustments being made by the coach, or that the Bucks are an incompetent organization, goofing around at halftime of a regular season game. While most likely untrue, that is how this incident appears to outsiders, especially the older generation unfamiliar with Twitter.

That being said, I do not believe Twitter to be something other than a minor annoyance to be considered by a professional organization. Most entries are short, harmless, and completely unrelated to an athlete’s profession. In fact, I believe that a professional organization could view an athlete with a Twitter as an asset. I would view it as a way for a team’s fans to feel more connected to its players; a way to make the athletes seem more "real" to the common fan.

I view blogs as an entirely different beast. The internet provides an uncensored medium to anyone who wants to say something. People can start a blog to whine and moan, complain, or just air their thoughts about anything they please. The question centers around Rod Benson specifically, and he is clearly the most popular athlete blogger who is not in his sport's premier league. As such, I will center my arguments around him, but you could apply most of what follows to any fringe-level professional athlete.

I do not doubt for a second that Rod’s blog hurts his call-up chances. The popularity of his blog is probably what hurts him the most. Rod has a following. I would not doubt that he is recognized more for his online musings than for his on-court performance. People read what he writes, and will continue to do so whether he is in the NBA or not. If he were to receive a 10-day or full season deal at some point his readership would probably see a significant upward spike. This would scare a team because it provides an inside glimpse of their organization, something potentially very unflattering. Is there a guarantee that Rod would write negatively of his NBA home? Of course not. But if you feel as a GM that you can find a player who can give you similar, or even slightly less production than Benson, but who is going to keep quiet and go along for the ride, you have to ask yourself: Is Rod worth the risk?

For me, Paul Shirley is the player who comes to mind. Like Rod he was a marginal NBA talent. Are they capable of being the tenth or eleventh man on your bench and making contributions when called upon? Sure. Neither of them is going to light the world on fire with their skills, but you know what you’re going to get with both of them on a consistent basis. While Shirley had a blog, I have admittedly never read it. I have, however, read his book (great book, fyi (good book, not great, fyi)). In it he speaks negatively of teammates multiple times. Shawn Marion comes to mind right off hand. What is to prevent Rod from doing the same thing on his blog or getting a book deal the same way Shirley did?

Of course, Rod could also pen glowing pieces about his new organization, coach, and teammates. In the same way that he could speak negatively about said players, there are just no guarantees. If a team is looking for a tall, skinny backup wouldn’t they go for someone a la Courtney Sims who will give them similar production without the worry of being badmouthed? In addition, Rod has a history of blogging his complaints about playing time while he was in France – not exactly what an NBA team would be looking for.

Rod himself mentions athlete bloggers like Donovan McNabb and Gilbert Arenas. Unfortunately for Rod, they are top-tier athletes who, when they started their blogs, were signed to (or soon to be signed to) deals in excess of 50 million dollars. They provide a service to their teams which few, if any, other individuals can provide. We all have seen Gilbert hit buzzer-beaters from two steps inside of the half court line. And I can attest to Donovan throwing the absolute most beautiful deep ball I have ever seen in person. A team wouldn’t cut them because they would be scared of what they would do for another team.  It is not like he is putting up the type of games where a team is going to look at him and say, "Wow! We HAVE to give Benson a shot! The kid has undeniable talent!" While he has the talent to be an NBA player, when coupled with the potential baggage there appear to be other, equal or better options available.

When people speak of double standards for great athletes compared to marginal athletes they are absolutely right. Superstars get away with things scrubs would not. Randy Moss ran over a traffic cop with his car! If Aundrae Allison (thanks for using a player I've never heard of, nor do I ever hope to hear of him - Brad Stricker would have been an equal analogy) ran over a police officer because he was pissed off he would be cut before he could post bail. Plaxico Burress shot himself in the leg with an unregistered firearm and the Giants want him back! If the backup fullback not only shoots himself, but is facing 7 years of jail time, his team is burning every team photo with him in it that they can find. Now I’m not trying to equate shooting yourself or someone else to having a blog, I’m just saying the having a blog is a potential problem. It is a concern for a team which will have to be constantly monitored and policed.

Teams want players who bring more to the table than they take off of it, on and off the court. When an elite athlete does something stupid or illegal, teams are willing to tolerate it (clearly everyone has their limits, but it is much higher for elite talents). But if a replacement-level player poses a problem in an off-the-court manner, why not replace him with a similar part?