Share All sharing options for: Gilbert Arenas Retires from Blogging; Should Rod Benson?

...have to, to get an NBA call-up?  I say no.  Read on (includes interview with Too Much himself) to find out why!

(UPDATE:  Check out the rebuttal here) 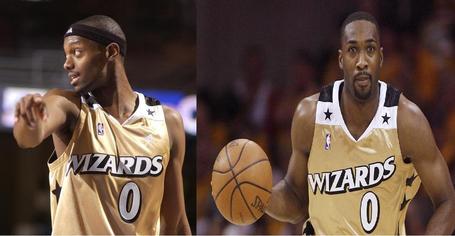 Last night, it was pointed out to me that Gilbert Arenas has retired from blogging, explaining it to the Washington Times as such:

At first it was fun, but then it seemed like it was turning into a double-edged sword. Your words can work against you."

"At first people enjoyed just reading the blog for fun, but then they started trying to read into it and take bits from it. So, it just seemed like it was turning into a double-edged sword. So, I'm retired."

Understandable, I guess, but I would have to assume he's a near-household name in large part due to his blogging.  I'll admit, I don't read many of the NBA player blogs (even quit following Shaq on Twitter today!), but did drop by Gil's everyonce in awhile to check it out.  In my findings, the only thing I really thought could be used against him, and even he had to know this, was this post, from March 25th:

"It was just me and my car ... speeding -- something that I shouldn't be doing. Then I got that thought that I know everybody gets once in a while, I was like, "You know, what if I just ran my car into this pole right here?" I don't know why I thought that, but I kept going with it. "Then I can jump off the road into this lake and just swim ... or drown. Whichever one comes first." It was really devastating. I was thinking, "Mannn, again?!" But I listened to Young Jeezy's verse in "They Know" to get me past those bad thoughts ... plus, I'm sane. I'm a sane person, I wouldn't do that to myself.

I could see how readers could have taken that the wrong way, but most of his posts were not nearly as dark, and usually made me chortle.

Getting to the reason I decided to cover this, if ever there were a blogger worth chortling, he plays in the D-League, is famous for the phrase "Boom Tho", and maintains blogs both on his personal website as well as Yahoo!  "Too Much" Rod Benson is a man among boys when it comes to blogging and has recently showing he might again be Too Much for the D-League as well.

However, from my vantage point, he seems to be getting blackballed, unnecessarily, from the NBA.  My analysis after the jump!

First, we'll get to Benson on the court, as first and foremost, that's what every basketball player should be known for.   Since being traded to the Reno Bighorns early in the month, Benson has played 10 games, including four starts, and is averaging 15.2 points, 9.4 rebounds and 2.5 blocks, and shooting 60% from the field in just over 31 minutes per game.  By comparison, he scored 13.6 points and grabbed 12.1 rebounds, blocking 1.4 shots per game last season.

Lou Amundson was first team all D-League and rookie of the year in 2006-07 when he got his first call-up, and in that season, he averaged 11.1 points, 7.6 rebounds and 2.5 blocks in 25 games.  Not that impressive from a pure numbers standpoint, but he's quickly turning into Suns fans favorite player off the bench - due to his charisma and the energy he brings (much like Benson).

So he's got better numbers than Amundson did in the D-League, but (and there's alway a but) Benson writes a blog! Oh, the humanity!  Wait, Lou writes a blog too, so that shouldn't be a problem!  Maybe it's this newfangled Twitter thing he has that everyone is abuzz about?  Nope, as Charlie Villanueva's made terrible decisions while twittering and it seems Shaq maintains one as well (along with Marcus Williams (not the D-League Marcus Williams)).  Is it just because he's on the cutting edge of technology and has this thing I've never even heard of called Mogotxt - obviously not the problem though because Eric Gordon, Shane Battier, Lamarcus Aldridge, Spencer Hawes, and Jordan Farmar are all using it as well.

So we've established that his numbers could easily warrant a D-League call-up.  We've also established that his internet savvy shouldn't really hurt him, as quite a few NBAer's use the same technology.  So why hasn't he been called-up?  Benson addressed the issue last season but I went to Too Much himself for his updated answer:

to me its all the same, personally. It's people simply enjoying something other than basketball in their free time. In Villanueva's case, in his not-so-free time. The perception is that if youre not in the gym, you should be walking around with a ball attached to your right palm or sleeping. What athletes are starting to do, is take their personal lives and make it not so personal, and, in the process, show that they DO participate in other things -- fun, normal things.

I'm just enjoying the game and playing hard. When I went to Europe, I had a great opportunity to lift weights hard and work on my shooting. Those two things have shown themselves this season and I'm definitely continuing the weight program, if not for the NBA, then at least for my shirtless Vegas poolside appearance, lol.

I also went to someone else that has a pretty large stake in Rod's career, his agent Bill Neff (unrelated note: great guy).  His thoughts are as follows:

Yes, I believe it is ok to twitter while you are in the league but when you are not, it can be a potential problem.  NBA teams should realize that big men are a little different, like relief pitchers (see Kareem, Wilt and Bill Russell, among others), so you can like piranhas (like Mikki Moore does) and be in the League.  I believe NBA people worry unnecessarily about a non-NBA player blogging. He has a gift, it is harmless, silly stuff and everyone appreciates his talents. They should, too.