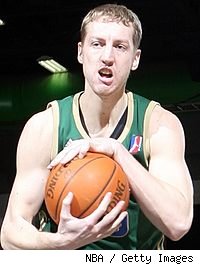 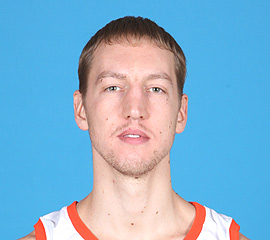 If you thought that I would stop talking about former Reno Bighorns swingman Yaroslav Korolev (pictured above for context later) just because he signed with CB Granada in Spain, you would have been right until I received a timely tip in my inbox from the best former Ridiculous Upside player blogger now also playing in Spain, Mr. Mike Gansey.

You see, over the weekend, Korolev - yes, the former Los Angeles Clippers lottery pick - competed in the ACB Dunk Contest along with Fede Van Lacke and Tomas Satoransky.  Satoransky took first, but Korolev received the loudest cheers of the night when it was time for his "prop dunk."

Possibly knowing he was outmatched by Satoransky, possibly just wanting to show off, Korolev opted to dunk over what looks to be his 5-foot-2 girlfriend (or novia en español - Thanks Mrs. Adams!) before giving her a piggy-back ride off the court.  I would've given the dunk a solid eight, but all but one of the judges gave him 9.5s - which I guess I can agree with, considering you probably have to take into account the "prop" as well when judging the dunk.

Oh, and if my writing isn't impressive enough, I actually have the full embedded video after the jump.  Skip to around the 5:45 mark to see Korolev dunking over his girlfriend.