There really hasn't been a lot happening in the minor league basketball world since the Austin Toros won the NBA Development League championship. Things should start picking up shortly, however, as teams (and the D-League itself) looks to build out their roster for the NBA Summer League season.

The New Jersey Brooklyn Nets are the first team to hold a public free agent workout and, as a result, they were able to bring in some pretty good names. Maybe not "good" in a sense of them still having excellent basketball abilities, but rather "good" in the sense that they were able to wrangle up quite a few names that are recognizable -- especially to those reading Ridiculous Upside. 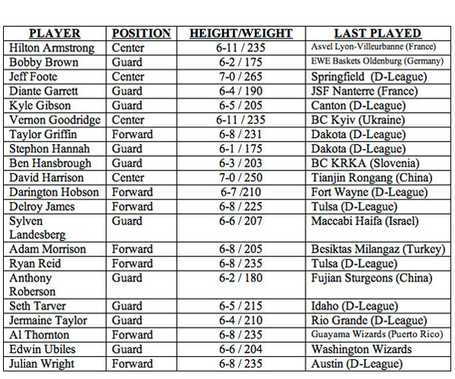 It's good to see guys like Seth Tarver, Delroy James and Stef Hannah getting looks considering they weren't considered among the standout players in the D-League this year (though Tarver and James are both really interesting NBA options if they're able to keep improving).

Aside from that, I'm personally a fan of Jeff Foote, Summer League standout Bobby Brown, Edwin Ubiles and hope that someday Al Thornton can reclaim some potential. Oh, and if anyone was wondering how Adam Morrison is doing, the fine folks at Ball Don't Lie took a gander.

For more on the Nets workouts, stay tuned to Nets Daily.