Lou Amundson -- Why We Have The D-League

Share All sharing options for: Lou Amundson -- Why We Have The D-League

As we all know, a couple of days ago, Deane Martin was awarded the first annual D-League Assistant Coach of the Year So Far award after coaching the Jam to a 4th quarter victory.  In that post, I mentioned his official Bakersfield bio saying he's had "hands on action" in developing Larry Hughes and Marcus Banks.  Not exactly something to be proud of.  At the bottom, there's also a little snippet that mentions former D-Leaguer Lou Amundson (albeit of the Philadelphia 76ers).  This guy is something to be proud of, and Deane was coaching at UNLV while Lou was there.  Come on VP, hype that!

Ben over at Ben's Suns Blog had a great profile on Lou today, featuring everything from his days at UNLV to his current times as a Sun.  On the season, Lou has played in 28 games this season, and although he's only averaging 3.3 points and 2.8 boards per game, over the last six games, he has been getting some pretty good minutes.  On January 7th, against the Indiana Pacers, Lou put up nine points and grabbed 14 boards, nine on the offensive end.

In Amundson's D-League career, he averaged 11 points, 7.6 rebounds, and 2.5 blocks in 25 minutes of action.  Other than the blocks, that's nothing spectacular, especially when you look at him being a couple inches shorter than the 6'9" he's listed at.  However, if you watched him play, he was always doing the little things, diving for loose balls, working his butt off to grab the boards, and not worry about his numbers.  This eventually earned him a call-up for the end the season with the 76ers, where he stuck for the following season.  Now, after a good Summer League with the Warriors, he's with the Suns and playing well.

It'd be great to see more guys in the D-League model their game after Lou.  Amundson proved that you don't have to put up numbers to get noticed, but if you play hard, hustle, and can D up, the NBA will take notice and the call-up will come.  Having a bad ass pony tail and passing gas on Pau Gasol may or may not help your cause. 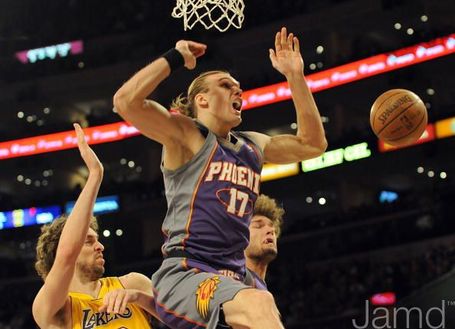