Share All sharing options for: 2009 Phoenix Suns Summer League Roster - Breaking it Down

Well, Phoenix fans, I have no idea how to guage what you're looking for: you traded Shaq for peanuts; those peanuts sound like they might go to New Orleans for Tyson Chandler. You also are rumored to be losing/trading Grant Hill, Amare Stoudemire, and even the glorious Steve Nash. Seeing as how you typically employ the least amount of players possible, I don't really know what's going to be left! After some research, it looks like the team would revolve around Lou Amundson, the players you receive in said trades and this Summer League team. I'm not excited about it. 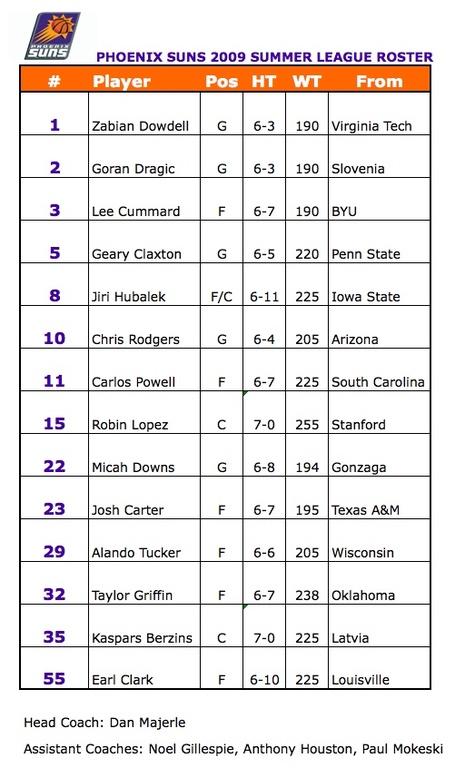 As per usual, I won't be breaking down Earl Clark, Alando Tucker, Robin Lopez or Goran Dragic, because they have guaranteed spots, and thus, Phoenix Stan should be able to provide any details you need about them over at Bright Side of the Sun. I also didn't break down Taylor Griffin, as Phoenix likes brothers of better players, and he was a second round pick.

After the jump, my detailed analysis. Before the jump, a link to my love affair with Paul Mokeski, the third string assistant for the Phoenix Summer League team and my hopeful best friend in Vegas.

Chris Rodgers - By most accounts he isn't a bad player, but he hasn't really taken the NBA career path since being dimissed from the UofA after a relatively succesful career there. After leaving, he wrote an e-mail to Southern Arizona media, saying why he was right and he doesn't have an attitude and gets along with people, ending it with "The true shall set u free." Next, he was unspectacular in the D-League (cut by Sioux Falls, then signed with Albuqueurque), then unspectacular in Belgium. Last season, he came back to the D-League, was drafted by Iowa, but cut before the season started. I don't know the inside story, but having the talent he does and being cut by your college team and two D-League teams cannot be good for an NBA career. I show he did graduate with a degree in Psychology, which is a positive. So is his defense and shooting. His decision making, obviously, and therefore shot selection, are the biggest negatives. I've liked Chris, so hopefully he catches on somewhere. Odds are it won't be in Phoenix, however.

Zabian Dowdell - Well, he has a fun name, I suppose. Henry Abbott loved him, gushing about him as a possibility to be drafted 28th by the Spurs in 2007, though he eventually went undrafted. Anyway, about Z-Do (I'm just guessing this is his nickname), he's pretty solid. He's not a great athlete, or awesome defender, or good at soccer, but he's pretty good at everything as far as I can tell. Except being a pure point. Apparently he lacks in that area, or at least did coming out of college, as that seemed to be the main reason he wasn't drafted. Also, according to DraftExpress, his ceiling is Luther Head, which isn't exactly a ringing endorsement.

Geary Claxton - Claxton played for the Erie Bayhawks. He didn't play well for them, however, and I am led to believe it was due to injury. See, he tore is ACL his senior season for Penn State, and that's what I'll attribute his 3.2 points over 15 games in the D-League to - injury. Since I'm not familiar with healthy Geary - Big Ten basketball doesn't appeal to me, I'll refer you to this post about him. See, it's a really well written piece, despite what I assumed when seeing the the title Did Geary Claxton Just Tear His F**king ACL? Go read it, and you can learn all about what Geary is apparently capable of when not rehabbing.

Carlos Powell - Well, Carlos played two years ago in Dakota, so I know his game pretty well. First thing's first though - his real name is Ricardo Arturo Powell. I'm not really sure why he goes by Carlos. Anyway, he was a bit of a blackhole on offense, but a very good blackhole, with serious NBA talent if he changes up the 'tude a bit. He's not terrible at anything, save for maybe the longball, but I can deal with that. Essentially, he'll bring the energy, he'll get to the basket, and he'll probably frustrate a teammate. Still, he'll contribute everywhere, and I can see him getting a spot in the NBA this season if his attitude has changed just a bit from two seasons ago. After all, I can sympathize with having a me-first attitude in the D-League when a player is actually talented enough to have NBA aspirations.

Micah Downs - I like Micah Downs. A lot more than Austin Daye, anyway. He was a roleplayer at Gonzaga, which will bode well for his NBA career, as he'll never be a featured player. If you're looking for a good NBA player that wasn't drafted, it's often best to look at the players that weren't amazing in college but did enough to get noticed, which is why I like Downs. He's tall, athletic and has a frame to build upon (that's coachspeak for skinny). He can also fly for a white guy (fly as in speed AND jumping, fyi). His biggest problem is putting the ball on the floor, so hopefully Steve Nash stays around to get him good looks inside or catch and shoot's from the perimeter. Otherwise, he's probably in trouble (and, thus, probably won't astound in Vegas).

Lee Cummard - I'm not enamored with Cummard, so I'm going to keep this short. He can shoot the lights out and will play smart, limiting the mistakes. The bad is he's a 24-year old rookie, isn't an athlete, and can't play defense on more athletic players, of which there are quite a few. Basically, he's quite well-rounded on offense, but needs lots of work on defense.

Josh Carter - Unfortunately, Josh Carter never really got better after his sophomore season. He was slated to become a star after Acie Law graduated from Texas A&M, but that didn't happen. Essentially, he's good on defense and was really good at shooting open jumpers. When he didn't get those open jumpers, he wasn't as good, but did sort of develop a mid-range game. Without a long range game and not much ability at finishing at the bucket, I'm not excited about his NBA prospects.

Jiri Hubalek - According to my research, Hubalek is your typical Euro big with a smooth jumper from deep and limited post game. He's a project, he's 26, and he's 6'11" without much in the post on offense and defense. Along with that, he definitely can't defend on the perimeter. Don't get too excited about him. I'm familiar with a lot of players, but Hubalek isn't one of them. Being a second year player at his age doesn't bode well.

Kaspars Berzins - I'd never heard of him, so I have to defer to Jonny Givony on this one. In short, he seems good.