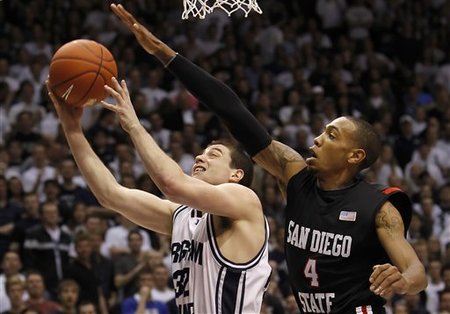 From the FanPosts, a thorough breakdown of JoshuaR from The Mikan Drill! -- Scott

Malcolm Thomas has the tools and athleticism to be a contributor in the NBA but can he show he is a well-rounded basketball player and not just an athlete? Thomas put up a good showing in the Portsmouth Invitational Tournament, earning first team honors, which no doubt piqued the interest of a few scouts. Standing at 6'9", Thomas has an impressive 7-foot-2 wingspan, which helped him to his 7.0% block rate in 2010-11 while anchoring the 3rd most efficient defense in the nation.

If Thomas wants to fit into a NBA rotation, he will have to be committed to defense on a nightly basis, as this will be the only way he will be able to garner any minutes. This is his biggest strength though, coming out through a hunger to play defense, the basketball IQ of knowing when and where to rotate and the eagerness to box out and rebound.

It is easy to say at 6-foot-9 that Thomas is undersized to play defense in the NBA. However, Thomas currently is projected to be a fringe rotation player, meaning he will not be matched up against star players most likely but instead matched up against the likes Amir Johnson of Toronto or Matt Bonner of San Antonio. When facing these players, Thomas should be able to hold his own on the defensive end. He showed a passion for working on the defensive end and the knowledge of where to rotate along with the athletic ability to get to the right spot on the floor to play help defense.

Considering he may be a bit undersized in the NBA, boxing his man out will be crucial in securing the defensive rebound and keeping his man off of the boards, as he will no longer be able to rely purely on his athleticism to secure the rebound. Thomas proved he has the fundamentals down and the devotion to boxing out, which will help him rebound at the next level.

Let's take a look at a few clips of Thomas on the defensive end (#4 in white). He works hard to deny Alex Oriakhi the ball, rotates to the right spot to cut off penetration and grabs the defensive rebound or boxes out the slightly bigger Oriakhi to keep him off the boards. Defense will be the reason that Thomas ends up on a NBA team and he has the potential to hold his own against NBA players.

Now, onto his weakness, which is creating scoring opportunities for himself on the offensive end. He was not counted on as a major offensive contributor for the Aztecs, taking only 18.4% of his team shots when he was in the game and many of them came in transition, off offensive rebounds or dump off passes.

When Thomas got the ball in the post, he showed he has the basis for an effective post game, as he is able to execute a simple post move but his footwork is not strong enough to get him any separation from his defender nor did he show the ability to finish over a defender. His footwork is methodical and too slow to beat many defenders at the college, much less the pro level.Teams will not have to double him in the post and he will need to improve his footwork if he wants to be able to have a chance to score in the post.

Thomas also showed a lack of ability to finish strong at the rim, despite his ability to out jump many of his opponents. This was due to being weaker than many defenders, who were able to challenge him at the rim and often alter his shot. A year or two working with a strength coach in the NBA could do wonders for him, as long as he does not lose too much of his jumping ability. Thomas needs to add some strength and gain some confidence to finish at the rim, which will be where he will be taking a majority of his shots.

Thomas will not have any plays called for him in the NBA and it will be imperative he can finish the easy shots at the rim. Thomas will be on the floor mainly for his defense but any points he can contribute in transition, off dump off passes or offensive rebounds will be a bonus and help him earn more minutes.

Whether he gets drafted in the second round or goes undrafted, Thomas will need to have a strong camp to prove his worth to a NBA team. He will need to show he can defend his position at the NBA level and finish strong around the basket. If he does that, Thomas will be a valuable asset for a team looking to shore up its defense.