It's still quite early to be putting out a mock draft, but I am anyways. Just the lottery, put by current standings by winning percentage. Enjoy. 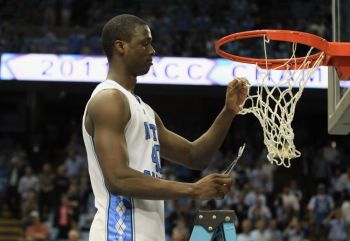 Washington already got a long, athletic combo forward project in Jan Vesely, so getting another one in Anthony Davis wouldn't make much sense. The Wiz are the worst shooting team in the league so far, and badly need some offense. Barnes has the size, athleticism, and shooting touch to be a 20+ point scorer in the NBA. 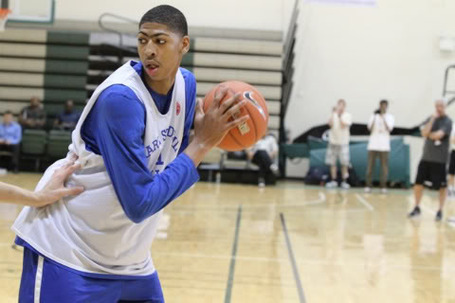 The Bobcats are currently running one of the more up-tempo offenses in the NBA, a perfect fit for a pure athlete like Davis. Augustin and Walker often play together, running the fastbreaks. Davis could run with them and finish on the break. He has a long way to go offensively in the halfcourt, but the Bobcats will be patient with him, because the potential is there for the 6'10" forward. 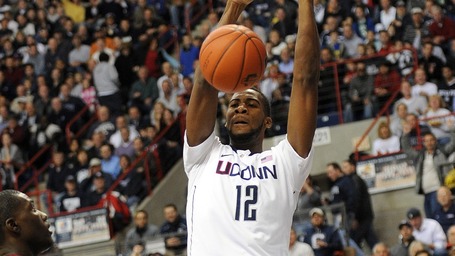 Drummond is probably the top center in this years draft, and he's probably also the best player on the board here. This pick would put an absolute monster in there to protect the paint, and Drummond's offensive skills are surpisingly advanced (although they still need work and refinement). Greg Monroe might be better suited play PF too. 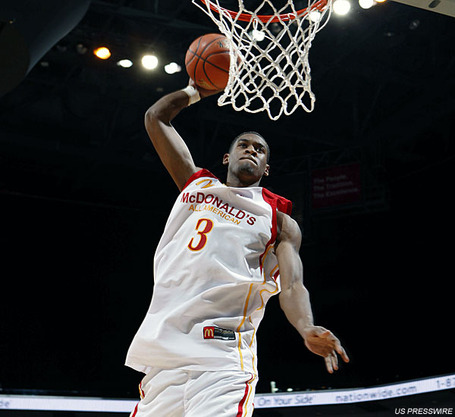 Assuming Howard isn't traded, the Nets will likely avoid a Center and try to sign Howard while trading Brook Lopez, and maybe trading this pick as well. The Nets are weak at both forward positions, and Jones can play them both. He's got crazy height/length for a combo forward at 6'11", and he's talented enough to score outside and in. 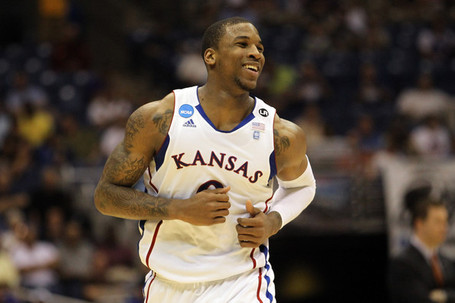 Robinson is having a great season so far at Kansas, averaging 17 per game as well as grabbing 12 boards per. Scouts wish he had an extra inch (he's 6'9"), but he's athletic and physical enough for that 1-2 inches to not matter. He's getting better at shooting, making 2-6 3's this season and 66% of his FTs (up from 51% last season), and he could be a mid-range threat in the NBA. 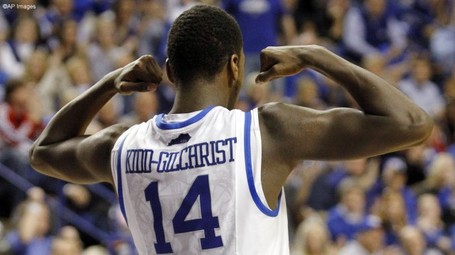 The Warriors' backcourt is pretty crowded right now, but they could be in the market for a super-athletic Small Forward. Gilchrist will need time to improve his offensive game, but early on he could score in transition and from slicing to the basket. He will be an instant impact on defense and on the boards. 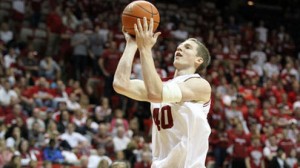 Given the mild uncertaintly of Cousins' future in Sac-town, and the lack of other legit talent on the frontlines, the Kings will look at the big men available. Zeller's draft stock is going up fast thanks to a excellent start to his rookie season. If the talented Cousins comitts to the Kings, he and the 6'11" Zeller would form a strong tandem up front. 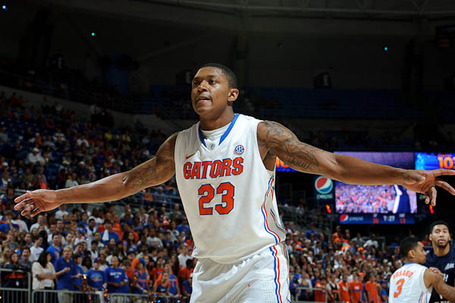 The Raptors suffer from an extreme lack of offense, and Brad Beal is here to help. He's struggling a bit from 3 so far this season, shooting only 34%, but nonetheless he will be a dangerous shooter in the NBA. Reminds me of Eric Gordon, a bit undersized as a SG with a dangerous 3-pt shot. Beal also rebounds like he's 6'8" although he's only 6'3" (averaging 6.1 this season). 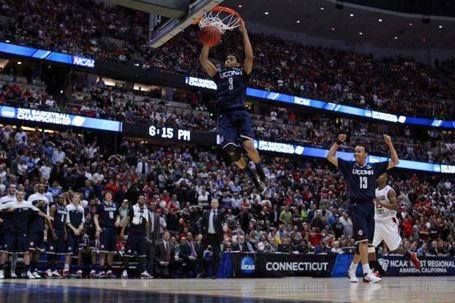 The Bucks are still looking for a true 2-guard that can score the ball. Lamb is leading the Huskies in scoring at 18.6 per, scoring from 3-pt range, mid-range, and finishing at the rim. He's got good size at 6'5" for SG at the next level. 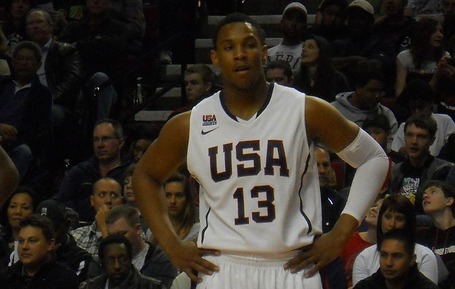 Sullinger drops a bit, partly due to him only being fringe 6'10" and still a bit overweight, and not possessing elite athleticism. Either way, Sullinger is a talented center prospect who knows how to use his width to his advantage. 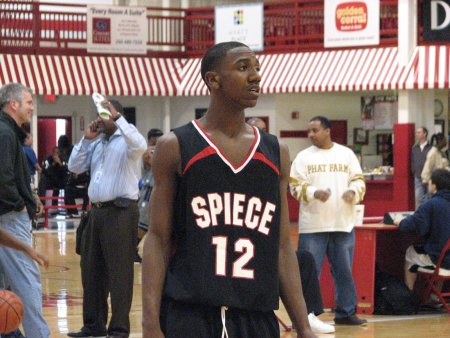 This is Nash's last season in Pheonix, probably off to some team in the East. That leaves a gaping hole at PG, which in this case would be filled by Teague. Marquis, the brother of the Hawks' Jeff, has good size and excellent athleticism. He knows how to score, but needs to work on his outside shot a bit. 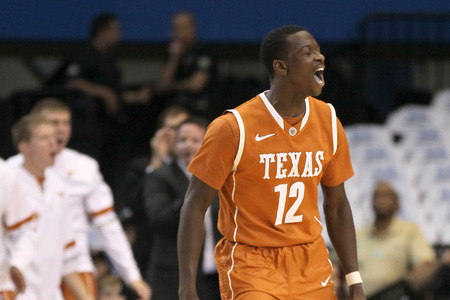 The Hornets had quick little point guards who were extremely effective in Chris Paul and Darren Collison, but they are gone. Kabongo is alot like Collison, he'll get alot of points and assists on the fastbreak, but for him to be consistently effective in the halfcourt, his jumpshot will need improvement. 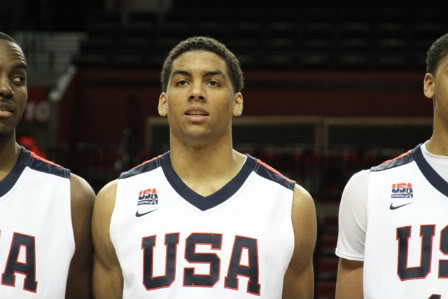 McAdoo will be an interesting lottery selection, considering he's currently playing 7th man at North Carolina. But when you consider Harrison Barnes and John Henson are holding his minutes, it makes more sense. McAdoo is a PF right now, but could develop into a SF which his height is more permitent of (6'8" maybe 6'9"). He's a great athlete with a strong body, and good offensive skills that will only get better. 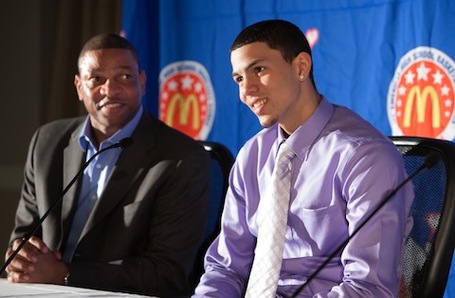 It was meant to be. Austin meets up with Dad in Boston, where Allen and Pierce are both on the sharp decline, leaving alot of scoring to be desired in the coming years. Rivers' raw talent/ability would put him in the top 10, but he's still learning the game and has to work on shot selection and decision making.