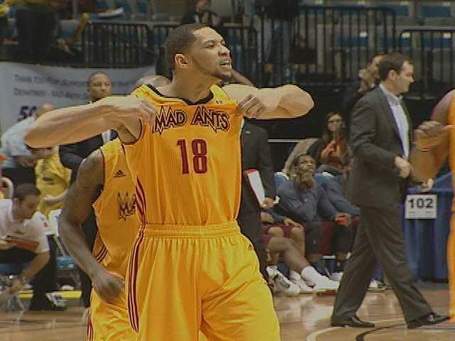 From a fan perspective it is great to see such great talent come to a court near you. Though some D-League fans do complain that these assignments take minutes from players already on the roster -- and even cause team chemistry problems in some cases -- the assignment is well worth the investment of minutes for the D-League team that gains the talent refresh.

Take, for example, Milwaukee Bucks assignee Darington Hobson (@ParkaySmooth). He joined the Fort Wayne Mad Ants in late December and, after one game and a handful of practices, he provided the spark that the Mad Ants needed to snap their four game losing-streak against the Canton Charge on New Year’s Day with a 104-103 victory.

Hobson finished the game with 22 points (6-of-10 from the field, 9-of-10 from the free-throw line) to go with fiverebounds, five assists and three steals in 37 minutes of play. Not to mention he also hit the game winning shot with 21.5 seconds left!

As good as those numbers are Hobson’s biggest contribution isn’t reflected in the box score.

Hobson came to Fort Wayne with a positive attitude, and was truly excited to be playing in the D-League for the Mad Ants. This type of energy is exactly what was needed in Fort Wayne.

After four straight losses, the players and the fans were drained and looking for a spark. Hobson delivered.

On New Year’s Day he not only played well, but fired the team up with emotional play, infectious energy and his constant cheering whether on or off the bench. The team found a rhythm it was sorely lacking and the fans were louder than they had been all season.

He also did the little things very well. When the defense gave him a good look, he took the shot. When passing was the right move he often picked up an assist. In other words, Hobson created opportunities for himself and others based on what was made available by the Canton defense. Hobson was also aware on defense and helped correct some weak-side defensive deficiencies that had been plaguing the Mad Ants most of the season.

His fluid play fit in well with the solid efforts put out by Darnell Lazare (24 points, six rebounds) and Ron Howard (21 points, five rebounds) while overall the team shot better -- 48% compared to an average of 42% in previous games. Fewer forced shots and miscues also helped secure the much needed win.

Hobson will eventually leave the Mad Ants and head back to the NBA, but hopefully the spark that his play has provided in Fort Wayne will stay behind.