L.D. Williams dunked the game-winning shot for the Springfield Armor in spectacular fashion against the Maine Red Claws on Thursday night so I figured I'd take a closer look at exactly how it happened.

This is an interesting play that is designed to get Lance Hurdle an open look in the corner. However, it’s drawn up to allow for 2nd chance points if the initial shot is missed. Let’s break it down, after the jump, to see how exactly the Armor pulled off their 93-91 win. 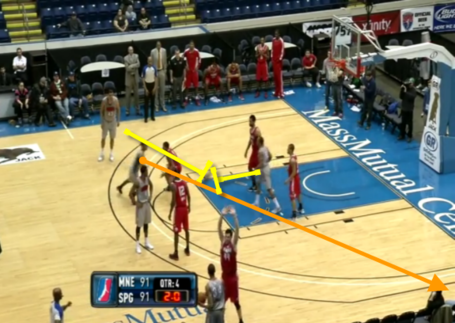 Jerry Smith steps up to the elbow and sets a screen that allows Lance Hurdle to get to the corner for the inbound pass from Damian Johnson. While Hurdle runs to the corner, Jordan Williams joins Smith at the elbow. This pulls the defenders away from the basket, and creates the space that L.D. Williams will need to get the putback dunk. 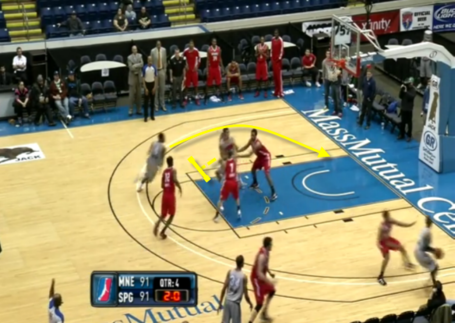 Here, Hurdle has the ball and is turning to shoot. Meanwhile, L.D. Williams is starting his cut to the basket. Smith sets a screen that gives L.D Williams just enough separation to get to the rim uncontested. 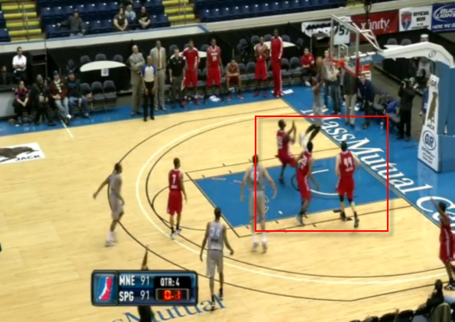 Hurdle missed the shot, but all Maine can do is watch as L.D. Williams dunks the put back shot and wins the game for Springfield.

As you can see, Maine is out of position and was too far away from the rim to contest the put back. This play was designed to get an open shot in the corner, but with clever screens away from the basket that pulled the defenders towards the top of the key, Springfield created the 2nd chance shot that they needed to finish the game.

Great design and execution on the part of Springfield! Here's an alternate angle: