Will Scott Machado Stick With the Utah Jazz?

The Jazz have had a long lineage of point guards, will Machado finally find a home to showcase his quarterbacking ability?

Share All sharing options for: Will Scott Machado Stick With the Utah Jazz?

If there were ever a player with an NBA skill set who has yet to stick on a roster, it's point guard Scott Machado. The former Iona College standout, who led the nation in assists, but went undrafted despite being one of college basketball's highly-touted quarterback prospects.

I've studied Machado since his freshman year of college in New Rochelle and I shared my thoughts on him predraft in several other outlets. Here was my evaluation in March 2012 for SheridanHoops.

- Sees the floor and gets teammates touches in their spots consistently.

- Handles pressure as well as anyone in the nation in terms of on-ball defense.

- Can rebound above taller players if he has to.

- Often times becomes passive with his shot, fine line between this and being "pass-first"

- Composure has improved greatly, but he still let's his emotions get the best of him

In watching him this year in NBA Summer League, I was impressed by his composure and his adaptation to the speed of the game. He also appeared to show more confidence in his jump shot and his leadership helped the Warriors to a 7-0 record and a Summer League championship.

What I like most about his game is his ability and decision making in the pick and roll. He is still very much a pass first floor general (a scorer's dream), but he's also starting to use his supreme vision to find his own shot and truly become an offensive threat by using his strength and speed to the basket and finishing in traffic. 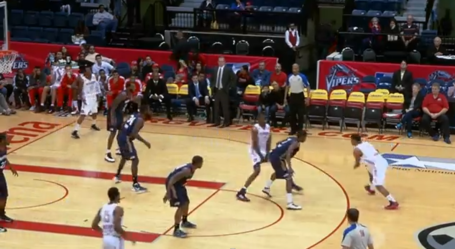 Because of his prowess in the pick and roll, Machado often saw defenses playing some match up zone in the Development League. Notice all five defenders are in the paint watching the ball. Machado uses the screen to the strong side and pushes the action towards a potential kick to the corner to a spot shooter for a corner three. 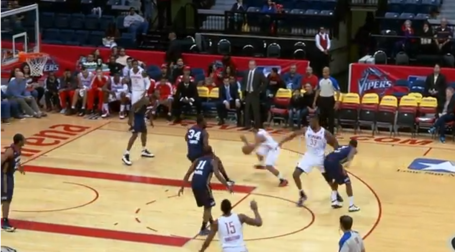 In reading the situation, Machado causes a reaction in the defense. He realizes he may have an opening to the right block, and makes the immediate decision to attack it, putting the pressure on the corner man's defender to help or stay home. He uses a neat inside/out hesitation dribble on the defender in front of him (#34), causing him to open his shoulders thus giving him the angle to beat him to the open block. 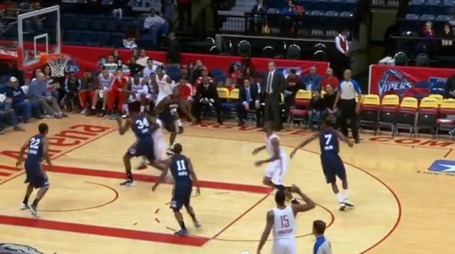 Here Machado has won the battle to the block with a good angle to finish, a decision that he has committed to because the corner man's defender has chosen not to help stop the ball and stay home on his man. 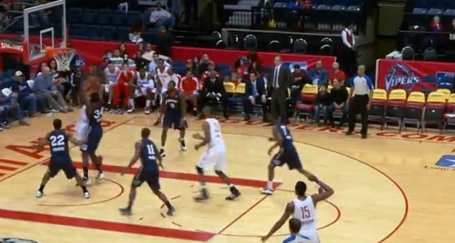 Machado's size and strength are on full display here as he shields the much bigger defender, taking contact and still finishing in traffic. 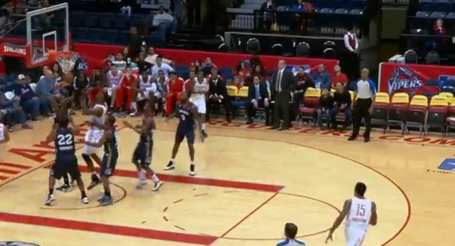 That's some big time action from Machado taking the ball from the top of the key and getting a relatively easy layup based on strength, vision and attacking angles. It's this type of ability (as well as his prowess in the open court) that separates him from many other point guard prospects. When you look at the Utah Jazz's roster as they head into camp, I can't help but think that Machado has, not only a chance to stick, but a chance to get immediate rotation minutes. The Jazz drafted who they hope to be their point guard of the future in Trey Burke, a guy that I'm not very high on, who will get the heavy dose of the workload to start. With inexperience comes potential for opportunity. If Burke struggles he will obviously start, but play less minutes. The Jazz have also brought in journeyman John Lucas III to compete for the backup spot along with Machado. I see advantage Machado there. You can see a potential opportunity developing there.

Machado is right where he needs to be in his development on the court in my mind. He's strengthened the weaknesses that plagued him and caused him to go undrafted on the floor. There are still questions as to whether he can defend two positions, and if he's capable of defending one, but right now his offensive ability is good enough to earn rotation minutes despite defense. Now it comes down to maturity, professionalism and focus. If Machado can perform like he did this summer, he'll find himself with an NBA job, and more importantly regular minutes, in Salt Lake City this season.