Could Andre Roberson Be The Oklahoma City Thunder's Starting Shooting Guard This Season?

Andre Roberson split time between the NBA and D-League last season, but now that the Oklahoma City Thunder parted ways with their starting two-guard, Thabo Sefolosha, there's a spot to be filled in the starting five. Could Roberson step up to the plate and be that player?

Share All sharing options for: Could Andre Roberson Be The Oklahoma City Thunder's Starting Shooting Guard This Season?

In his five and a half seasons with the Oklahoma City Thunder, Thabo Sefolosha started in all but one of the 368 regular season games he appeared in. But after being involved in a sign-and-trade with the Atlanta Hawks this offseason, the starting two-guard spot on the Thunder is now up for grabs, and there's a number of candidates for the job, including second-year swingman Andre Roberson.

After being drafted with the 26th overall pick in 2013, Roberson spent his rookie season flip-flopping between the NBA and D-League. He played in 17 games with the Thunder's D-League affiliate, the Tulsa 66ers, putting up 15.9 points, 9.6 rebounds, 2.5 steals, 1.6 assists and 1.3 blocks in 31.7 minutes per game. With the Thunder, he appeared in 40 games and started in 16 when Sefolosha was sidelined with a calf strain. Roberson averaged 1.9 points, 2.4 rebounds and 0.5 steals in those 40 games.

Even in his short stint with the Thunder, Roberson made his strengths clear (he's a long, athletic wing who excels on the defensive end of the court) while also shedding light on some of his shortcomings. Yet with the 66ers, he was asked to shovel a much bigger load. His usage rate jumped from 15.2 percent to 21.7, and he played 129 more total minutes in 23 fewer games. For that reason, looking at what he did in the D-League gives a much bigger sample size to judge his game on.

So, with all that in mind, is Roberson ready to fill Sefolosha's role? Let's take a look.

Roberson attempted a total of 32 threes with the 66ers and made 10 of them (31.3 percent). While that's not a terrible percentage, it fails to paint the real picture of how much he struggles to space the floor at a consistent rate. For a better indication, consider this: Roberson shot 10-for-38 (26.32 percent) from midrange in the D-League and only 2-for-23 (8.7 percent) on jump shots as a whole with the Thunder. He also shot 45.9 percent from the free throw line in 61 attempts with the 66ers.

Even though he didn't play that many minutes in the NBA as a rookie, it didn't take long for other teams to catch on that Roberson couldn't shoot. What ended up happening was defenders basically dared him to shoot whenever he caught the ball outside of the painted area. As a result, he wasn't able to fly under the radar as much as a starter, thus his shooting percentage took a massive hit (down by nearly 15 percent). 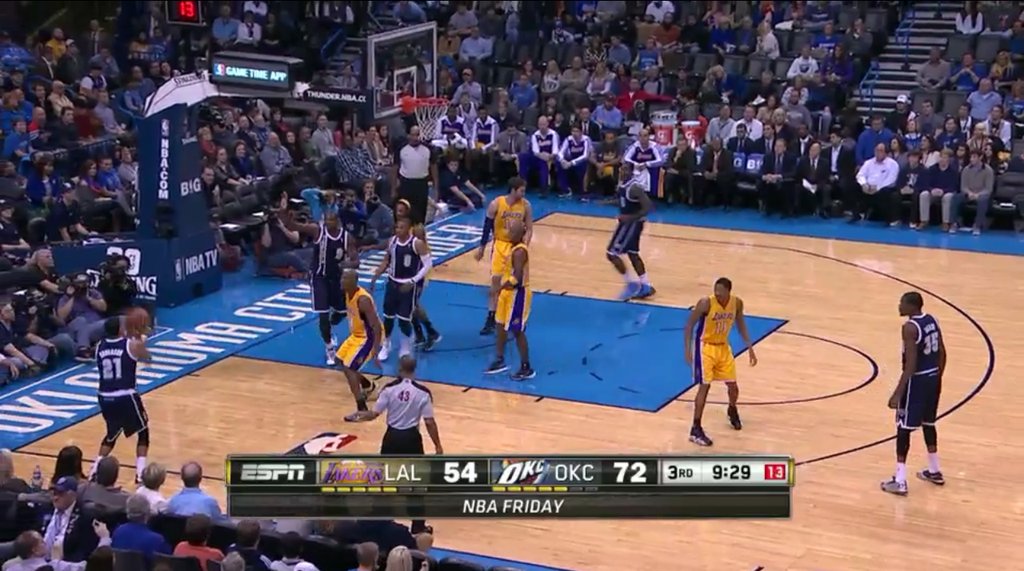 Roberson's shooting woes weren't quite so glaring when he was with the 66ers, mainly because he could get by more on his talent alone. He attempted 13.2 field goals per game and shot 51.6 percent from the field thanks to his ability to get out in transition and put back missed shots on the offensive end. Nevertheless, it's a big problem and something that greatly lowers his ceiling at the next level.

The main issues with Roberson's mechanics are as follows:

Being a good shooter is about creating good habits and being able to replicate those over and over again. For Roberson, that's the biggest thing holding him back from being a plus-player offensively at the next level. As of now, teams can get away with simply letting him shoot anything on the perimeter. Roberson knows that, though, and he's working on improving his jump shot. According to The Oklahoman's Darnell Mayberry, he has been spending a lot of time with the Thunder's shooting coach, Adam Harrington, during training camp.

Size-wise, Roberson has everything you'd want out of a wing at the NBA-level. He's 6-foot-7 tall and has a 6-foot-11 wingspan, both of which serve him well on drives to the basket. Given his physical attributes, he doesn't have to jump very high to get to the rim (his 8-foot-9 inch stranding reach is proof of that), so he's effective once he gets into the paint. With the 66ers, he shot 69.5 percent in the restricted area.

While he's not someone who will work well out of isolations, he has a good first step and controls his body well, particularly on straight-line drives to the basket. He doesn't do it often but Roberson has shown the ability to weave his way around a defender and finish with either hand, too. He also never stops moving off the ball. Once his defender takes his eyes off of him, he darts off towards the basket, setting him up for a lot of easy looks.

Seeing as teams have to pay so much attention to Durant and Westbrook, having someone who is constantly moving in an attempt to find open seams and get easy looks would be a nice compliment.

However, despite his size and leaping ability, Roberson struggles to finish at the rim. With the 66ers, he only shot 50.7 percent on layups, which was right around the league average.

The problem is, he only really has one move when attacking the basket: a quick first step followed by a straight-line drive. And because of his wirey frame, he gets pushed off of his spot too easily. He also shows defenders the ball too often when he's going up for a layup, leading to his shot getting blocked quite frequently.

To add to that, he isn't particularly explosive and he doesn't have that great of a touch, so he misses a lot of gimmes. Part of the problem is that he short-arms shots because he goes underhand more than he should; the other is that he tends to rush shots close to the rim. Given his leaping ability and length, you'd expect him to easily lay the ball in once he's around the rim, and that's not always the case.

While Roberson's offensive game is ways away from being a finished product, he's already a very polished defender.

After spending most of his collegiate years playing power forward, Roberson was great instincts when it comes to blocking shots. He blocked a total of 22 shots in 17 games with the 66ers and did so in a variety of ways, be it chasing down someone on the fastbreak, surprising them by flying in from the weak side, or stopping his own player from getting an easy look in a one-on-one situation.

But even though he did play a heavy amount of minutes at the four in college, Roberson has no problem guarding shooting guards and small forwards. He moves well laterally, and while he doesn't have the strength necessarily to stop bigger players, his length makes up for it.

He does a great job of playing the passing lanes, too. He's a ball hawker and, as mentioned several times already, he has a huge wingspan. When that's combined with a good knowledge of how to play defense as well as a never-say-die attitude, it makes for a very effective defender.

Roberson is a terrific rebounder. With the 66ers, he averaged 9.6 rebounds per game, good enough to be one of the top 10 rebounders in the D-League during the 2013-2014 season.

Interestingly enough, he doesn't box out all the often, but it doesn't hurt him in any way. Prior to the draft, his head coach at Colorado, Tad Boyle, said the following, via NBA.com:

There's a number of reasons why that's the case, the first being his wingspan. He gobbles down rebounds on the defensive end because his arms are just so long, and even though he's not a great leaper he knows where to position himself and the rest of his physical attributes aid him in grabbing rebounds over bigger players.

His timing is impeccable, too. He's great at tipping back misses (they made up for 11.2 percent of his field goals with the 66ers), which is the result of him chasing down boards and knowing how to read a defense. Overall, he has great instincts and a nose for the ball.

Roberson doesn't take plays off, either. He's always chasing down the ball, whether it's flying out of bounds or dropping off the front of the rim. He is -- and always has been -- a hustle player, and it's a pain in the ass trying to keep someone who spends every waking minute he's on the floor crashing the glass, especially when it's coming from the perimeter.

Even in the small amount of games he spent with the Thunder last season, Roberson excelled on that end of the court, too, averaging 8.5 rebounds per 36 minutes.

When the Thunder fell to the San Antonio Spurs in six games in the Western Conference Finals last season, it became clear that, in the simplest of ways, they need players alongside Kevin Durant and Russell Westbrook who can space the floor. For that reason, Roberson doesn't seem quite ready to replace Sefolosha in the starting unit.

He fits a big need defensively, that much is clear. With Serge Ibaka and Steven Adams being the two big men who will likely round out the starting unit on opening night, Roberson's versatility on the defensive end fits in nicely. However, until he improves his jump shot and becomes more efficient around the rim (being able to create his own shot would be an added bonus), he's too much of a liability offensively.

That wouldn't be as much of an issue with him coming off the bench, of course. In short spurts, he could get away with being their hustle player; someone who comes in as a reserve for 10-15 minutes a game and chases after every rebound, go balls to the wall on defense, and takes advantage of teams falling asleep on either end of the court. There's certainly value in having someone like that on the roster.

Roberson's game is almost the spitting image of Sefolosha's at his point, albeit with a much worse jump shot. But if he can improve that aspect of his game (quite a big "if") he could find himself fighting for that starting two-guard spot.