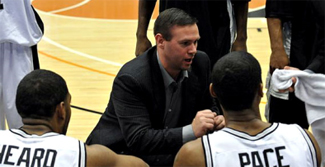 "We are what we repeatedly do. Excellence, then, is not an act, but a habit." - Aristotle

Under-appreciated talent and minor-league basketball are almost synonymous with each other. Even though the Continental Basketball Association's season may have come to much-to-soon end, one cannot fail to recognize the quality of the players, and more significantly coaches, that are part of the league. In fact, the CBA may be home to one of America's top young and little known coaches, Kevin Keathley of the East Kentucky Miners.

Keathley, who in his 10 seasons as a coach has never had a losing season (in fact he's never even had to sweat having one), has implemented an offensive philosophy at East Kentucky that can only be compared to Loyola Marymount's Run-N-Gun... on steroids. In 2007-2008 seasons, East Kentucky averaged 111 points per game, including dropping an absolute ridiculous 194 points in the season finale. During this years CBA-ABA inter-league challenge, in which Keathley's team went 8-0, the miners managed to absolutely obliterate the West Virginia Wild 172-70, the largest margin of victory in CBA history and one of the most one-sided beat downs in the history of professional basketball.

Talent begets talent of course and just a week later Keathley coached CBA veteran Jermaine Blackburn to a quadruple-double consisting of 22 points, 10 rebounds, 14 assists and 10 steals, the first quadruple-double in Continental Basketball Association history. In fact if you cant remember that last time someone scored a quadruple double in the NBA, I don't blame you... it was 15 years ago when a little known player named David Robinson did it against the Pistons.

Jermaine was not to be outdone of course, and fellow teammate Mike Dean decided to add insult to injury against that same West Virginia team by scoring 50 points and 10 assists! What makes Dean's performance so extraordinary (aside from the obvious) is the fact that he became just the sixth player since 1975 to score 50 points while dishing out 10 assists in a professional game. Dean joins such names as Michael Jordan and LeBron James to accomplish this feat since 1975... except people watching them had to pay $7.50 for a beer while doing it.

Keathley is undeniably a winner, leader and role model in every sense - his instant credibility is supplemented with genuine caring and concern for the well being of his players. His up-tempo offense will make you sweat just sitting in the stands and by the time the game is over you just might be cross-eyed from trying to keep up with its pace. He has an amazing reputation around the game, not just for his accomplishments on the court, but for the type of person he is. As they say, the cream rises to the top, and coach Keathley will one day bring his talents to the NBA... where his team might just blow up the scoreboard at The Garden.