The extremely versed Scott Fields is looking to utilize his coaching talents at the NBA D-League level. After coaching extensively overseas and domestically, Fields is ready to tackle the official minor league of the NBA.

Share All sharing options for: Coaching Veteran Scott Fields Views NBA D-League As His Next Stop

For over a quarter-century, Scott Fields has been perfecting his coaching craft at various levels. Fields has traveled the world, and taught players of all skills levels and backgrounds, the game which he loves so much. After coaching at the International, Division I, Division II, Junior College, NAIA, ABA, CBA, NBL, and NBA Summer League levels, Fields is focused on bringing his talents to the NBA Development League.

"I'm very interested in coaching at the NBA D-League level. I've consulted with Keith Smart, Brian Gates, and Nick Nurse, all of whom are close friends. It would be a tremendous opportunity for me to grow, and learn new philosophies in an affiliate system." Fields said.

Fields is set on staying in the states this upcoming season. Last year, Fields was the head coach for one of Venezuela's top league teams, but is now focused on landing a coaching position in the NBADL. With the ever-growing success of previous NBADL coaches, who can blame Fields?

Fields received a scholarship to play point guard at Montreat-Anderson Junior College in North Carolina, but had his scholarship rescinded when he lost feeling in his limbs, and was bedridden for months after receiving a certain polio vaccine unknown to the Indiana area, where Fields was from.

After hearing from doctors that he may never walk again, Fields faced an unprecedented life hurdle, but was able to translate the misfortune, into a career path that would lead him to where he's at today. Basketball was apart of Fields' life from a very young age, and despite his medical setback, Fields has been able to nurture his passion.

Fields spoke with RidiculousUpside.com, and further discussed his current state of mind. "Growing up in the state of Indiana, basketball can easily be ingrained in you, and that was the case for me. It's a love of the game that keeps me going. I'm always looking for that next exciting challenge. When I was 18 years old, the game was taken away from me due to a terrible reaction from a polio vaccine. I feel very fortunate to have stayed connected to the game through coaching." Fields explained.

Player development is the most important aspect of the NBA D-League, and coaches who can implement a winning strategy, along with a program suitable for their player's growth, can find themselves moving onto the next level in a short amount of time. NBA teams place a tremendous amount of focus on player development, and coaches with a background similar to Fields, are likely to find success in some fashion.

"It's about instilling your will with your personality. Build authentic relationships, establish strong communication, and show players that you have their best interest in mind. First, you have to build the trust and be honest in the evaluation process. The player has to be realistic with himself as well. You have to get rid of any delusion, but it's mostly about being honest and trustworthy." Fields commented.

Fields has worked with legendary NBA coach Jerry Sloan, and his coaching thought process has been influenced from his time observing, consulting and scouting for the Jazz when Sloan was head coach. In a complex coaching environment such as the NBA D-League, it seems like an approach similar to Fields, would garner positive results. 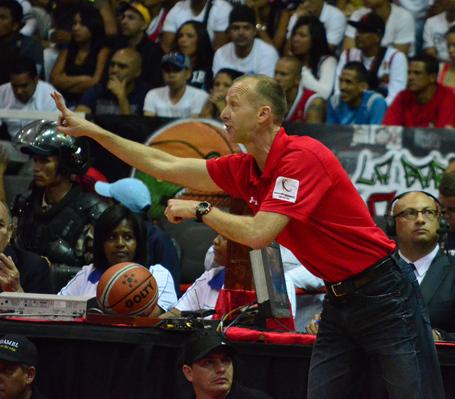 Darko Rajakovic helped guide the Tulsa 66ers to the second round of the NBADL playoffs this past season. Like Fields, Rajakovic started coaching in his teens. Rajakovic was stellar in his first season as head coach in the NBA D-League (the first European born head coach in the NBADL, or NBA umbrella), and appears to have found a nice landing spot in Tulsa, as a member of the Oklahoma City Thunder organization.

Fields believes that his experiences outside of the United States, have helped him grow as a coach, and a person. During his stints in foreign countries, Fields learned valuable team bonding lessons. "Overseas we were able to mesh the local talent with other foreign players to establish an understanding of roles, we were able to get the players to buy into our system." Fields added.

Since the NBADL has become a desired destination of sorts for aspiring NBA coaches, the reality of coaching in a minor league setting is something that must be addressed when considering an undertaking in the NBADL. The NBA D-League is far from the NBA in terms of travel amenities, and accommodations. However, it is still an aspect of the grind which players and coaches must prevail through.

Fields touched on how he would address such circumstances. "For me it's not a challenge, it's about preparation. If you're going to have 8-10 hour travel days, use that as a chance to bond with your team. You can still coach while you travel, with technology it's easier to prepare while travelling. Time management is key." Fields described.

When RidiculousUpside.com caught up with 16-year NBA veteran Scott Williams last season, the former player turned NBA D-League coach at the time, explained the hardships of an NBA D-League schedule.

If a coach can find the silver lining in such environments and conditions, perhaps they can help their players follow suit, and mimic their actions. Despite the obvious struggles, Williams was able to do so, and became a better coach in the process. He is now a member of the Milwaukee Bucks organization, after spending a season with the Idaho Stampede.

Fields' desire to coach in the NBA D-League shouldn't come as a surprise, the league has become a favorable landing spot for aspiring NBA coaches. Fields dedication to the sport is arguably unmatched, just a short bit ago, Fields was coaching his adopted son's AAU team in Las Vegas.

Fields helped guide the team to an overtime victory with literally three available players due to their six-man roster being depleted by foul trouble. Fields was approached by NBA veteran Thurl Bailey about the position with the team, and Fields gladly accepted. "Winning that game in overtime was a great experience. We got everyone to believe, and even though the odds were stacked against them, they prevailed." Fields enthusiastically concluded.

Below is a picture of Fields and his son, as NBA D-League teams look to fill out their coaching staffs for the upcoming 2013-2014 season, an experienced and passionate basketball mind such as Fields, should be considered as a potential candidate to occupy an NBADL bench. 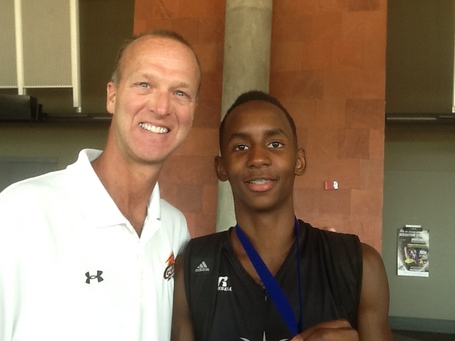