Thousands of basketball players dream of making it to the NBA, but the Texas Legends' Paul Sturgess stands above the rest in an obvious way.

Share All sharing options for: Basketball's tallest player uses the D-League in hopes of reaching the NBA

It's Thursday night after a Texas Legends win, and as usual, the post-game scene is chaotic. Forty-five seconds are allotted for handshakes to be exchanged and pleasantries to be doled out between each team, before fans stream onto the court for autographs, pictures and perhaps a snippet of conversation with the NBA hopefuls.

Just like every night here at the arena, the most popular player isn't the leading scorer. In fact, this guy who is currently surrounded by a crowd of children and adults alike isn't even in uniform. There's no way to hide from the crowd for 25-year-old Paul Sturgess. After all, at 7 feet 7.3 inches, he's officially the tallest basketball player in the world, according to Guinness World Record.

Formerly a Harlem Globetrotter traveling the world with the obviously ironic nickname of "Tiny," Paul is best known for being the guy who can dunk a basketball without jumping. But with the help of Dallas Mavericks General Manager Donnie Nelson and the Legends, the Mavericks' D-League affiliate, he's on the path to become more than a name in a record book. Paul wants to be a basketball player. 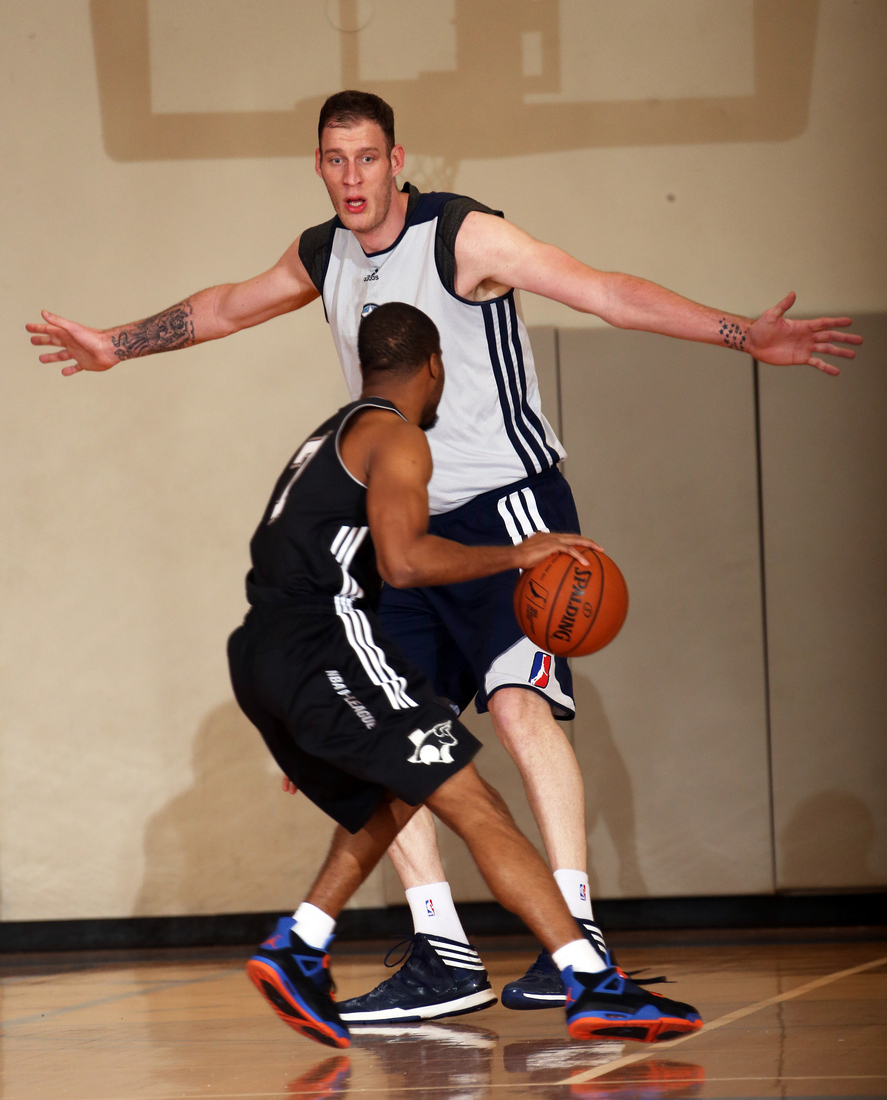 Is there even room in the NBA for a player like Paul?

The history of the "uber tall" NBA players is rather brief. The 7-foot-6-inch Yao Ming is the most successful and talented of the lot -- his eight NBA All-Star appearances are more than all other players taller than 7 feet 3 inches combined. Shawn Bradley, 7 foot 6 inch, is probably best known for being dunked on, and Manute Bol, 7 foot 7 inch, might be most famous for this photo.

7-foot-4-inch Mark Eaton deserves a nod for being one of the four members of the 3,000 blocks club, and the 7-foot-3-inch Arvydas Sabonis was a European superstar who didn't receive a chance to shine in the NBA until his prime was over.

Currently, the tallest player in The Association is 7-foot-3-inch Hasheem Thabeet. As a whole, it seems the phase of the "uber tall" big man is waning, especially after the career of Yao and several others ended prematurely, thanks to incessant issues with their knees and feet caused by their uncommon size.

"Most of them really can't move laterally well, and that hurts them," 6-foot-9-inch Mavericks forward Brandan Wright said. "They can't play long stretches of the game. It's kind of a dying breed."

But Nelson, who is the also owner of the Texas Legends, doesn't see it that way.

"He's a late developer, hasn't been playing basketball that long," Nelson said. "Size does matter in the NBA, so we thought, ‘why not?'"

Wright admitted that he wasn't sure how the NBA would change in the future, either.

"It all goes in cycles," he said. "Twenty years from now, we might be going back to the dominant post-up game."

Despite his deep voice, Paul's English accent still carries through when he talks. Born in Loughborough, England, his height is healthy and genetic, not the result of a growth disorder. His father stands 6 feet 9 inches and other members of his family are of above-average height - even though his mother is only 5 feet 5 inches.

At the age of 14 and height of 5 feet 6 inches, Paul grew 18 inches in two years. He thought he might be done growing when he graduated high school at 7 feet 2 inches - but thanks to another growth spurt, he eventually settled at his currently height.

After traveling the world with the Globetrotters in 2011 and 2012, he said the transition to the States was relatively simple.

"The adjustment was straightaway. It wasn't my first time away from home, so I don't really get homesick," he said. "I met a lot of good people and I'm half-American now, I guess."

Short or tall, there's always some acclimation to a new job. Paul does his best to keep up with the oft-hectic schedule of the NBA Developmental League, and since passing his Texas driver's license test in November, squeezes into a Chevy Tahoe for games and practices.

Buying shoes to support his 320-pound frame requires a size 22. Fortunately, he said shopping for clothes is a little easier than finding shoes.

Paul still talks to his family in England on most days. In the age of phones growing larger and wider, Paul is content with the 3.5-inch screen of the iPhone, no matter how small it is in his hands. His teammates are quick to tease him about it, but those spending time around realize he's a normal guy who just happens to taller than an average door frame.

Paul's agent, Rich Katz, made the first introduction between Nelson and Paul, who was with the Globetrotters at the time. Katz and Nelson were friends thanks to Katz's representation of J.J. Barea, a crucial member of the Mavericks' 2011 NBA Championship team.

"He's got the most important things in a big man that I look for: hands, feet and heart." -Donnie Nelson

It was hard to properly scout someone playing for the Globetrotters because of the nature of their scripted, entertainment-first play on the court, Nelson confessed, but some of Paul's qualities did stand out besides his height.

He described Paul as a player who is not afraid of contact, playing with a "streak of toughness."

"He's got the most important things in a big man that I look for: hands, feet and heart," Nelson said.

But there are other problems that come with coaching the tallest basketball player in the world - nobody has quite played the same style of basketball as Paul.

Nine-year NBA veteran and Legends teammate Melvin Ely, 35, likened it to shooting on a Nerf basketball hoop hung on the back of a door - "that's how tough it is."

"His angles are totally different from anyone else's," Ely said. "But once he gets the hang of his own game, his own body and his feel on the court, he can sign his own team."

Ely played against Yao during his years in the NBA and said that combination of skill, size and shooting touch made Yao a "freak of nature." But he wouldn't totally rule out the possibility of Paul figuring it out - "if he works his ass off."

For now, though, Paul still has a long way to go. He declined offers from European teams in favor of the visibility and coaching that the United States can provide, but he has only played in 11 games this season, and none more than 11 minutes, because he lacks the playing shape.

"This whole year is a learning process for me, playing against guys like Melvin every day," Sturgess said. "It's only going to make me better if I do go to Europe or something like that. I still have a lot to learn about the game."

Ely does say that Paul doesn't always take full advantage of his height.

"He plays down here with us. We try to play up there where nobody can reach him," Ely said. "He shot a hook shot over me, and I jumped twice - still didn't block it." 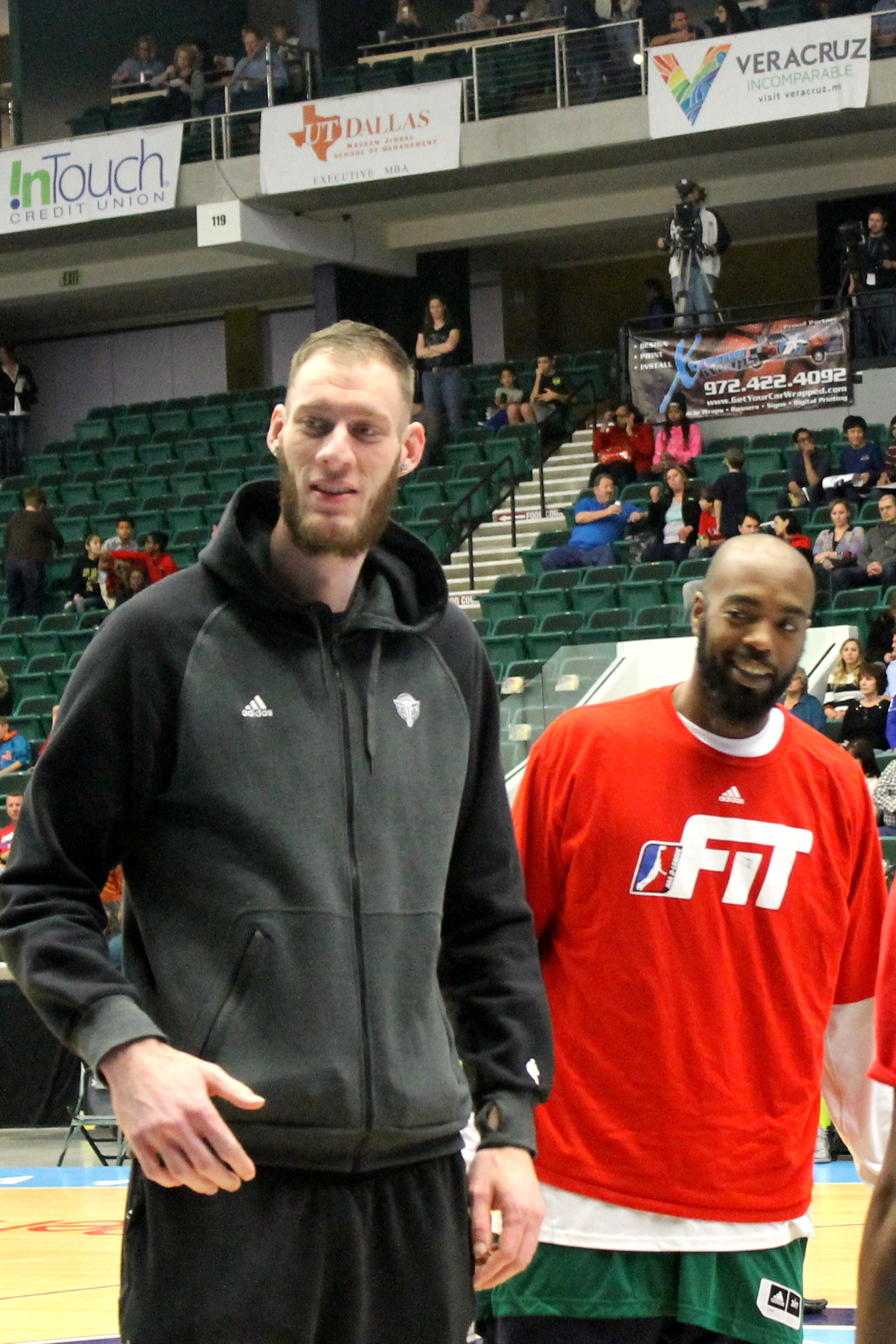 Paul Sturgess and Melvin Ely chat before the game. Photo by Tim Cato.

After his basketball playing days are over, Paul said he wants to be a teacher or "something like that." Through the NBA's Continuing Education Program, he plans to earn his master's degree in the next couple of years.

"I did a lot of stuff with the Globetrotters, visiting schools and stuff like that," Sturgess said. "It helped me embrace everything a little bit more."

It's impossible to know where his story will take him in the coming years. But at the very least, Sturgess has earned himself a small fan base with the Legends.

"Being a big, you critique every big you see," Ely said. "Since the beginning of the year, he does nothing but surprise me."