Once the hottest team in the NBA D-League, the RGV Vipers have fallen into a tailspin as the regular season closes. What's going on?

The once hot-shooting hand of the Vipers have suddenly cooled off with only two games remaining on their schedule. The former No. 1 seed is now sitting in fourth place as the shooting woes won't seem to go away.

The Vipers acquired former Michigan Wolverines' standout and backup Memphis Grizzlies point guard Darius Morris March 16. Since then, the team has posted an overall record of 1-5, including the six-game skid the team is currently riding.

Besides having a new player join the team late in the season and possibly affecting the team's chemistry, the Vipers have gone ice-cold from three-point range, the team's bread and butter. 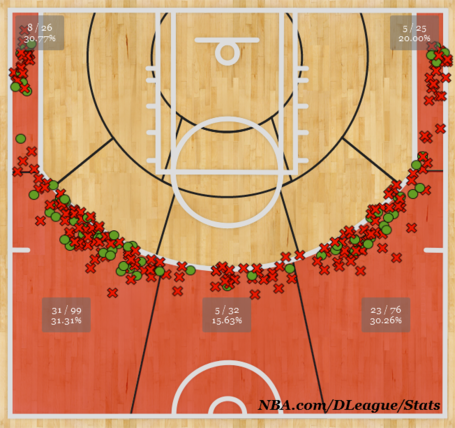 During the losing streak, Morris has shot a dismal 6-for-31 from three-point range (19%) and the team has shot below their season average as well. The Vipers have lost their venomous touch a they've gone into hibernation. The team has shot 72-for-258 (27.9%) in the last five contests as they've struggled at what they've excelled at for the majority of the season.

Most playoff teams peak at the end of the season as the roster settles and develops chemistry together. Rio Grande Valley appears to be the exception. They seem to be slumping at the worst possible time with the playoffs just a little more than a week away.

Despite the three-point deficiencies, Morris is averaging 17.7 points per game with RGV, including a 31-point outburst against the Austin Toros in a losing effort. Morris is shooting 70 percent from inside the arc (33-for-47), but can't seem to find the stroke on the other side of that line.