I'm going to move this back up to the top of the page so that you're able to find all of our All-Star Weekend coverage quick and painless!

The weekend started off with Courtney Sims getting called back up to the Phoenix Suns.

Next, Phoenix Stan live blogged Dream Factory Friday Night and then recapped it the next morning.

Following this was another Phoenix Stan exclusive, live blogging the D-League All-Star game.

And last but not least, Phoenix Stans recap of the D-League All-Star Game.

All the while, I was unable to watch any of this due to some freelance work that I was able to pick up while jobless. (Let me know of any opportunities out there!  I'm available!)

Bigger problem, however, is even with Futurecast, I'm still unable to watch any of this.  The following was the post I put up Friday night, recapping my pain in not being able to watch Dream Factory Friday. 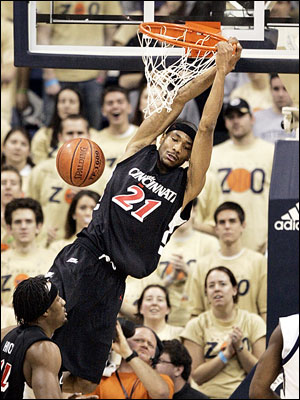 How did everyone enjoy all that the D-League had to offer, in a showcase of sorts, at Dream Factory Friday night, probably the most exciting part of the D-League besides maybe the playoffs?

Will Conroy won HORSE, wasn't that exciting!?  How about Blake Ahearn hitting nine 3's in a row to win the 3-point contest... Amazing!  Best of all, how about James "Flight" White, who killed it in the dunk contest against breakout star of the weekend Keith Clark!

Wait, you didn't see it?  Oh good.  I didn't see it either -- was just pretending so you guys would kep reading. 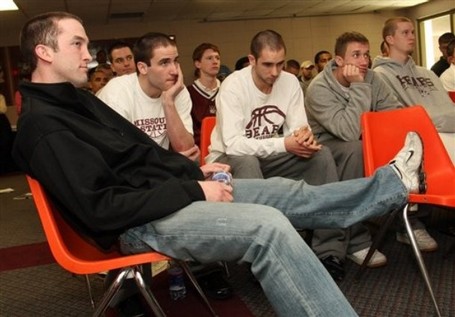 Knowing Phoenix Stan would be liveblogging, I decided to head over to Stadium, the only bar I frequent and the best in Bismarck, to meet with Woody and the wife, where they were planning to have their Valentines dinner.  Myself and a friend showed up and had the lovely young waitress turn it to NBA TV.

"Yes ma'am," I responded, "The D-League's Dream Factory Friday Night is going to be on.  The Wizards Blake Ahearn should be on any second draining some 3-pointers!"

She turned on NBA TV, and I was treated to some sort of highlight package featuring the best of the Rookie-Sophomore games.  After conferring, we just assumed that maybe the celebrity game was on the same court, so it was just delayed a bit.  No big deal, I found out that Marc Jackson played in the 2001 game and wore #44 for the Golden State Warriors.  I never assumed he was even that good!

However, after it passed 9 pm up here in lovely Bismarck, I started getting worried, so I put a text into my D-League team contacts.  "Not streaming -- will have tomorrow on 30-minute delay" UPDATE: Went good, but were some issues right away.  Sweet.  After not being able to watch online, and now apparently not being able to watch it on the seldom seen in North Dakota NBA TV that I had to go to a sports bar to watch, I'm disappointed.

I mean, I was able to watch the Idaho Stampede play the Tulsa 66ers in Orem, Utah (final score 82-68), in front of about 200 "fans" with both teams shooting under 37% from the field, 35 total turnovers, 49 fouls, five total players scoring in double figures, and Tulsa scoring nine points in the fourth quarter.  The only positive of that game, if I remember correctly, was the silky smooth play-by-play of Vance Palm of the Bakersfield Jam.

However, when I wanted to watch the D-League Dream Factory Friday Night, featuring (from what I hear) a pretty exciting dunk contest, hometown favorite Blake Ahearn draining it in the 3-point contest, and H.O.R.S.E., I was unable to do this.  I had a friend that has never been to a D-League game, but was willing to watch this so that I could show her the wonder of the D-League that I love so dearly, but I was unable to do this.  When the D-League had the chance to show the World why it should matter, why I blog about this everyday, nobody saw it.  Anywhere.  Unless you were one of the few that went to Dream Factory Friday Night rather than the Rookie Challenge, you didn't get to see any of this.

You didn't get to see the future of the NBA.  And I'm disappointed in this.

I would love to open my blog up to the D-League to let me know why Patrick Ewing Jr., one of the most marketable D-Leaguer's, didn't participate in the dunk contest, but Keith Clark, whom even I've never heard of, kind of disappoints me... Why Bobby Jones, whose had nearly one million call-up's, didn't participate in the HORSE contest... Why the D-League didn't let it's most marketable event of the year be seen anywhere but in Phoenix.

Thank God for Phoenix Stan and his Live Blogging!

UPDATES:  Here's some NBA TV footage... So NBA TV was there, covering it, but it didn't get on NBA TV, or Futurecast?  Somebody let me know what happened!

Also, Phoenix Stan has broke it down for us to show us just how amazing James White is at dunking.