Dreams were made...the morning after

Share All sharing options for: Dreams were made...the morning after

When you have a great night sleep filled with fun and adventurous dreams sometimes you wake up and it all fades away in a blurry haze.

Last night's D-league Dream Factory Skills Competition is NOT one of those times.

For you fans of the D-League who don't know me, it's only because here in Phoenix we don't have a team and with all the...ehemmm...drama...with the Suns, we've been somewhat otherwise occupied.

That doesn't however mean that I and any basketball or even sports fan I can spend 3 minutes with isn't. As you well know, there is something completely awesome and totally inspiring being around the dedication and commitment of these young athletes and their coaches. It is far more what sport is supposed to be about. The competition. The desire. And not the millions and millions of dollars distractions that comes with the pro level.

Courtney Sims, our newest Phoenix Sun and your d-league all star, summed is up best last night saying, "In anything you do in life, if you work hard for it... people got to respect that".

We do respect it Courtney. We do.

Last night, thanks to the good graces of Joanna from the D-League PR team, I had the opportunity to sit courtside and blog the action. The live blogging wasn't my best work ever (it is a bit hard to type while your jaw just dropped on the key board after a vicious slam). I managed to take a few pictures but my camera isn't great and it's operator is worse. So, sorry about the lack of images. I did get this one of the kids dance contest. Fun stuff: 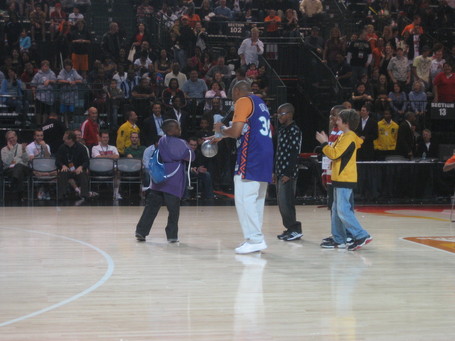 As for the contest itself? Well the HORSE competition wandered the pasture a bit and even with a tight clock trying to lasso things in and the officials playing the role of cowboy tending the herd, it got a bit lost.

There were a lot of fancy trick shots early. None of them drew net. Then to put points on each other we saw things like the free throw bank shot. One of the better hits from outside was a baseline three-pointer that skimmed off the glass from...darn it's already faded from memory...must have been Erik Daniels but could have been Will Conroy, the eventual winner.

Conroy ended up pulling out some fancy layups with double clutches and what not to stifle his less athletic competition. Will Conroy apparently can finish at the rim which makes sense since he's the leading scorer in the league as a point guard. I did get to spend just a few minutes with Will earlier in the day.

Blake Ahearn can shoot the ball. Right, you knew that already. There is no doubt in my mind that he could compete in a three point contest at any level. With any rules. With any colored ball. This one wasn't even close to being close. You can just pencil Blake in as the winner as long as he shows up.

The main event of course was the Dunk Contest. I called it during the live blog that Keith Clark was looking strong and he certainly proved me right.

Brent Petway, who is rumored to have some above the rim skills, tried to get too fancy. There was something with a heart shaped paper with a girls picture on it taped to the front of the rim. I guess he was going to try and kiss the girl in the picture? I don't know. It was dunk contest fail.

Let's just state the obvious about James "Flight" White. Dude can flat out fly. Gravity in Phoenix had no affect on this man and from the way he was strutting around the court, he knew it too.

I am just hoping at some point those dunks end up online somewhere because my words fail to do them any kind of justice. I am pretty sure though that his first one was a free throw line take off one handed jam.

Clark was impressive as well, obviously. He scored a perfect 100 in the second round, forcing a tie breaker. He had one that he tossed off the side of the backboard (the line edge) , caught and then when through his legs for the jam. He's legit folks.

After the event I raced to put up my laptop and ran up the bleachers and down the stairs to "run down" one of my childhood local sports heroes, Walter Davis. Sweet D was one of the dunk contests judges and I caught up with him in the lobby area for a few quick questions about what he saw. Listen up here.

Walter was very gracious in stopping to talk with me. He seemed well and is working for the Denver Nuggets organization in community relations. It was a real honor for me to talk with one of my favorite Suns players of all time. If you didn't get to see his game you missed one of the smoothest ball handlers and best pure mid-range shooters ever.

Finally, to end the evening I sat for a few minutes with "Red Team" and Iowa Energy coach Nick Nurse. We talked a bit of Suns basketball (of course) and about Courtney and the upcoming all star game until James White walked by and he had this to say:

"Wow...Those were some Amazing dunks. Amazing." Yup. That pretty much sums it up right there.

I am off now to head back downtown for the day's festivities. I will try and do some kind of preview of the d-league all-star game and will hopefully be able to live blog that as well.

I can tell you this about the game. Courtney Sims will play and he and the rest of the guys realize they are playing in front of a big audience of scouts and their peers and they intend to treat this game with respect and play hard. I am looking forward to it.