According to various sources both within the Red Claws organization and outside, it looks like the head coach for the inaugrual season of the Maine Red Claws will be none other than 28 year old Austin Ainge. Danny Ainge's progeny has followed in his father's very successful footsteps thus far, playing at BYU for four solid, yet unremarkable years, and now transferring into the field of scouting and coaching.

The word is that the Ainge announcement should be made soon, if not later today by the Red Claws organization, cementing Austin as their Head Coach for the 2009-010 season. Ainge joined the Southern Utah University coaching staff in 2007-08 as an assistant, which proved to be his only coaching experience to date. He left SUU after the one season to work under his dad at the Boston Celtics as a scout.

Ainge's hobbies are listed as playing basketball, the Church of Jesus Christ of Latter-Day Saints, and moving up the coaching ladder faster than anyone before him. But despite his hobbies, I'm not sure how I feel about this hire. The NBA Developmental League is not the NBA, but the talent level, stress level, and level of play is the next highest thing in continental United States. Austin Ainge could be a supremely qualified coach with more upside (ridiculous even) than anyone else on the market. But here's the bottom line: he has very, very limited experience coaching, and no experience as a head coach.

It worries me that the Red Claws organization is rolling the dice on an unproven guy in their first year of existence. We've argued at RU before about the upside of hiring a guy with local appeal, versus a guy who wins. Ultimately you want both. I just hope that the hiring process in Maine (aka Nepotism) didn't overlook other candidates that were more qualified and better suited to run all the aspects of a D-league team (player acquisition, constantly changing rosters, and high level competition).

I'm sure Austin is an impressive guy, who can get a handle on things quickly, but it's a steep learning curve in the D-League. Good Lucky Austin Ainge, we'll be pulling for you. 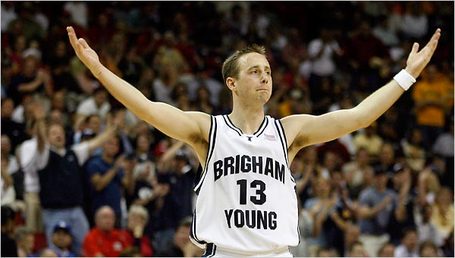