Comparing the NBA and the NBADL

Share All sharing options for: Comparing the NBA and the NBADL

Although many NBA fans are only marginally aware of the existence of the D-League, it played a prominent role in the association's landscape last year.  The biggest connection for mainstream NBA fans is probably when Sundiata Gaines drained a buzzer beating three-pointer to beat LeBron James and his Cavaliers in only his fifth game out of the D-League.  The D-League also produced NBA players like Reggie Williams and Anthony Tolliver, and high draft picks like Byron Mullens and Hasheem Thabeet saw time in the D-League.  With the increased influence the D-League now has on the NBA, some NBA fans may look to invest a little more time in understanding and watching their minor league system and getting to know the players it's developing.

There are, unsurprisingly, substantial differences between the D-League and the association.  In order to quantify those, I've take a look at six components of the game that should help us understand the differences between the styles of the two leagues.  They are pace (possessions per game), three pointers per field goal, free throws per field game, assists per made shot, turnover rate, and overall efficiency, all using stats from the 2009-2010 NBA and NBADL.  Follow the jump for lots of graphs.

The most noticeable difference in the two games is in the pace, or number of possessions per game.  The NBADL plays at a pace very similar to the pre-3 point line NBA of the mid 1970s, when the average game contained around 105 possessions.  Today's NBA isn't quite as slow as the Jordan era (high 80s average pace), but for various reasons, the game is much slower now, and much slower than the D-League. 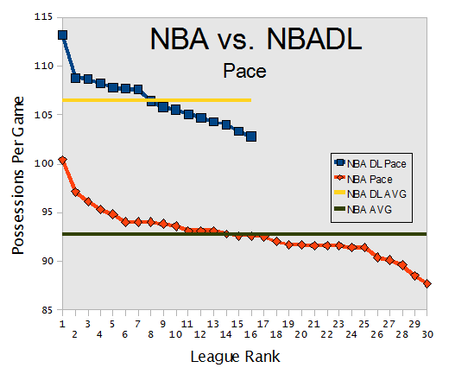 Not a single D-League team played at a slower pace than the NBA's fastest team, the Warriors. This is why both leagues score roughly the same amount of points per game despite a (perhaps expected) large efficiency disparity, favoring the upper league, as the graph below shows. 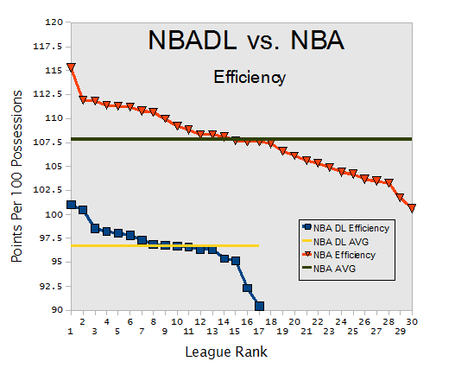 The two leagues don't differ much in shooting - the D-League actually comes out better, shooting 47% to the NBA's 46% and 37% to 35.5% from three point land.  It's possible that there's a big difference in offensive rebounding, but I can't test that from the data available at Basketball-Reference, which suggests that the Erie Bayhawks totaled 9 team offensive rebounds last season.

There are two more factors we can look at besides shooting and rebounding to explain this efficiency difference: free throws and turnovers.  First, free throws: 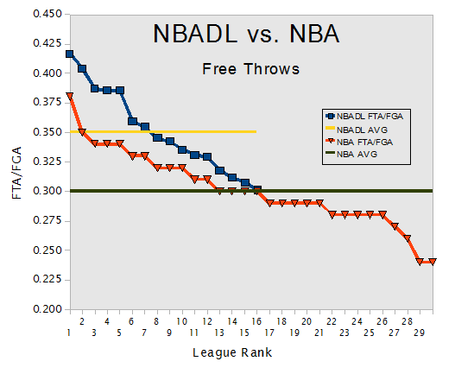 It turns out that D-Leaguers actually get to the line far more often than NBAers, as measured by free throws taken per shot attempted.  I used this measure to get a better handle on the style of the game.  To me, this suggests that there are more "slasher" type players and more hard drives to the basket in the D-League, resulting in more fouls as well as more time spent in the penalty.  It could also be simply poor refs, or another explanation that I'm missing.

As far as offensive efficiency goes, we'd rather look at free throws made per field goal, but as the difference in FT% between the two leagues is only about one percent (favoring the NBA), the analysis is similar.  This is, along with the higher FG%, actually another point in which D-League offenses are more successful than the NBA.  In order for the NBA to be so much more efficient than the D-League, NBA offenses must turn the ball over far less.  Indeed, we find this to be the case. 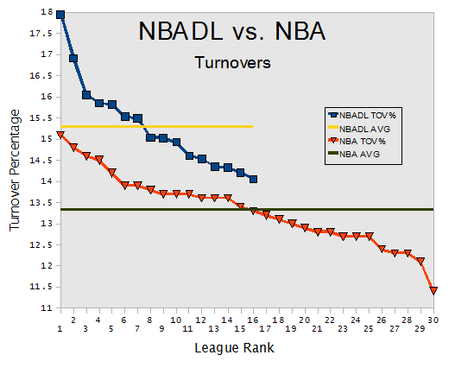 Every single D-League team turns it over more often than the NBA average.  Although a difference of only about 2% doesn't seem like much, the fast pace of the D-League results in an extra 2.5 turnovers per game per team, which is more than enough to cancel out the marginal differences in shooting and fouls.

Finally, let's look at two aspects of the game which impact efficiency but are more indicative of style. First, let's look at the amount of three pointers taken by teams. 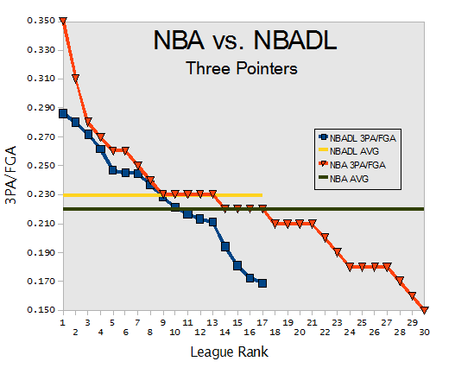 The amount of three pointers taken doesn't appear to be as much a function of the league as much as it is a function of each individual team's game plan.  For example, the top teams in the NBA in this graph are the Magic and the Knicks, teams that like to put up threes as part of their coaching styles.  The D-League does shoot slightly better on threes, as mentioned above, and that might explain why the league average is slightly higher.

The final indicator we'll examine is assist rate.  Is the D-League, a league where players are looking to put up numbers in order to get a job at the highest level of basketball in the world, a more selfish league? 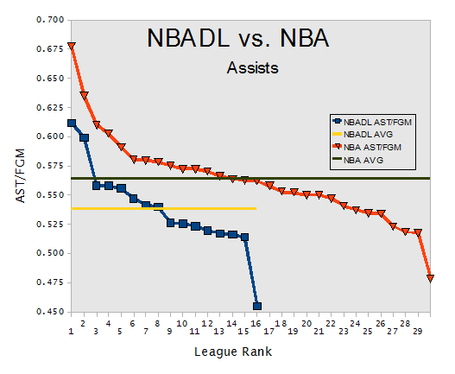 Unsurprisingly, fewer made shots are assisted in the D-League.  Even with the outlier at the bottom, the Austin Toros (866 assists on 1903 made shots), the D-League still assists on roughly 2% fewer shots.  We should expect this to result in a higher FG% in the NBA, but as mentioned above, the D-League actually holds a slight shooting advantage.  This is probably because D-League defenders aren't as quick on rotations or as good in isolation, allowing driving shooters and pull up jumpers to be more effective.

Overall, the D-League is a faster and looser game, with more fouls and more three pointers.  Due to a variety of factors, there are more turnovers, which results in efficiency numbers far below that of the NBA.  The biggest difference is by far the speed, as teams use roughly 13 more possessions per game on average.  This means that when we look at per game numbers for D-League players, we should adjust for the fact that they won't get nearly as many possessions to put up those numbers in the NBA.