Steve Francis, formerly known as Stevie Franchise during his nine-year NBA career, has taken his talents to China after not being able to secure a job in America since a 10-game stint with the Houston Rockets in the 2007-08 season.

He's getting paid well to do it too. According to a Chinese website, via my favorite Chinese basketball website NiuBBall, the 33-year-old Francis is getting paid a guaranteed $800,000 for this season - plus several "special provisions", including acceptable housing, a private teacher for his child, round trip airfare for family members, insurance for his family, and compensation for all money spent on international calls.  Oh, and Francis is also allowed to bring along private doctors, as he has concerns about Beijing's ability to monitor and take care of his surgically repaired knee.

And since he's being paid so well, Francis is expected to play - even when he's suffering from jetlag and is told he won't play. Oddly enough, that's what happened a few days ago when Francis was sitting on the bench and icing his ankle during the waning seconds of a blowout loss.

Completely unprepared to enter the game, Francis didn't even have time to tie his shoes as he quickly shed his warm-up suit and tucked in his jersey before entering the court.  With his shoelaces loose and the ice pack around his ankle, Fu Laoda - loosely translated into English as Big Boss Francis - received a loud standing ovation and the obligatory "Fu Laoda, jiayou!" chant from the home crowd as he ran back on defense after the free throw. (In Chinese, jiayou literally means "add oil," but translated into common English, it would mean "let's go!" "here we go!" and/or "come on!")  After a Charles Gaines putback for Qingdao, Francis received the inbounds pass and dribbled out the clock, despite cheers from the crowd egging him to shoot one at the buzzer.

He did not record any statistics.

Asked why he decided to against his original plan after the game, Min smiled wryly and answered, "You didn't see all the fans yelling and swearing at me?"

They won last night, though, leading to Francis taking off his jersey and celebrating according to the pictures below the fold. 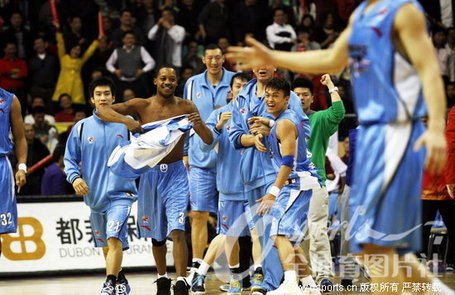 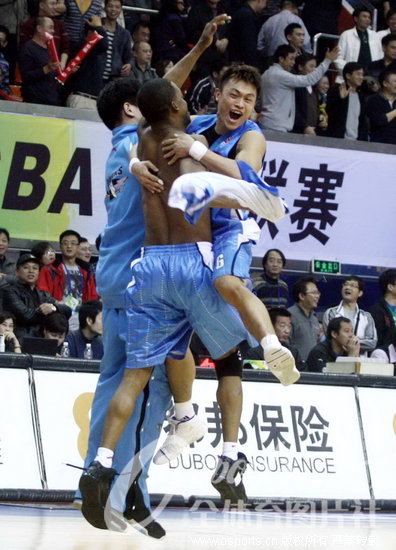 In other Chinese news, Rashad McCants still does not have a job former NBAer David Harrison seems to have severely injured his ankle judging by this rather morbid photo gallery.

Most of this news was brought to you by the guys over at NiuBBall. If you're interested in seeing what Peter John Ramos and Javaris Crittenton are upto, I suggest you check that site out.