Does Seth Curry Have What It Takes To Make It In The NBA?

Seth Curry spent the 2013-2014 season in the D-League playing for the Santa Cruz Warriors, where he emerged as one of the top prospects. Now, after a strong Summer League outing, Curry has landed an opportunity with the Orlando Magic, where he'll fight for the team's final spot. Question is: Does he have the tools to make it in the NBA?

Share All sharing options for: Does Seth Curry Have What It Takes To Make It In The NBA?

After three years at Duke, where he emerged as one of the NCAA's sharpest shooters, Seth Curry failed to hear his name called during the 2013 Draft. Luckily for the 24-year old, though, he got a training camp invite from the Golden State Warriors, who signed him to a non-guaranteed deal. Although he was later waived after six preseason games, in which he averaged just 7.2 minutes per game, it landed him a spot on the Warriors' NBA D-League affiliate, the Santa Cruz Warriors, thanks to the D-League affiliate rule (up to three players waived from a training camp roster can join a team's D-League affiliate).

From there, Curry blossomed. In his first game with the Warriors, he put up 36 points and six assists in a win over the Austin Toros. By the season's end, he averaged 19.7 points, 5.8 assists and 3.1 rebounds per game, making him one of the top prospects in the NBADL. He also led the Warriors to the D-League Finals, putting up 24.6 points and 4.9 assists in seven games.

While Curry was unable to parlay his impressive rookie season into a full-time NBA gig (he received just two call-ups, both on 10-day contracts) he is hoping to make the jump after a strong Summer League outing, and his journey will start with the Orlando Magic on a training camp invite. The question is: Has Curry proven enough in one D-League season to convince general managers that he isn't a a one-dimensional player anymore?

The biggest concern coming out of college was that Curry is a two-guard trapped in a point guard's body. At only 6-foot-2 and 185-pounds, he lacks the height and strength to play shooting guard in the NBA and, at the time, he hadn't shown off enough to believe that he's capable of commanding an offense.

For the most part, many of those concerns are still warranted. Curry doesn't have a quick first step, nor is he particularly fast in a straight line. It's not rare to see a defender cut off his lane or force him out of position by bumping into him, so he sometimes struggles to get to the basket. To add to that, he isn't explosive, which certainly hampers his ability to finish at the rim. He's not going to finish over the top of a defender and he certainly won't power through one, either. As a result, he shies away from contact and settles far too often for floaters, resulting in easy missed shot around the rim.

Curry sometimes forces plays when they aren't there, too. Instead of simply passing it off to a teammate or keeping the ball alive, he'll try and make a play rather than taking what the defense gives him.

However, Curry is a crafty player. He knows how to create space with his dribble, and although he settles for floaters in the paint, he has a soft touch, leaving room to believe that he could add that as a legitimate weapon to his arsenal. Not only that, he's a smart player. He's not afraid to split double-teams and change pace to keep his defender off guard, and he does a good job of using angles to get his shot off. Rarely will you see him out of control on drives to the basket, trying to do more than he is capable of.

Curry's shooting ability has never been a concern. At Duke, he was utilised primarily as a two-guard (one of the reasons teams were concerned that he might not be able to make the jump to the NBA) and he was one of the best long-range shooters in the NCAA as a senior. With the Warriors, little changed. The bulk of his damage came from outside the paint, and he did so efficiently -- 37.2 percent shooting from three (7.0 attempts per game) and 44.1 percent from midrange.

What makes Curry special in that regard is the multitude of ways in which he can get his shot off, all the while maintaining his balance and rhythm. After playing shooting guard in college, Curry has no problem playing off the ball, so he can spot-up and curl off of screens with ease. But Curry can also create his own shot, which makes him even more valuable. He has a tight handle, which he uses to create space with a variety of crossovers, jab steps, and step-backs.

Curry has great range on his shot, too. In pick-and-rolls, he has confidence to shoot whatever the defense gives him. He has no issue pulling-up going in either direction, making him a multifaceted and polished shooter.

Note: Curry made 26-of-30 attempts on step-back jumpers last season, according to the D-League's official site.

Yet, because he lacks the normal speed you'd expect to see in an NBA-calibre point guard, Curry has a tendency to settle for tough shots, such as pull-ups with two defenders closing out on him, difficult step-backs, or long range jumpers when he has space to attack the basket. He's also a heat check-guy, so once he gets going his confidence sores through the roof. Sometimes that works out well; sometimes it doesn't. 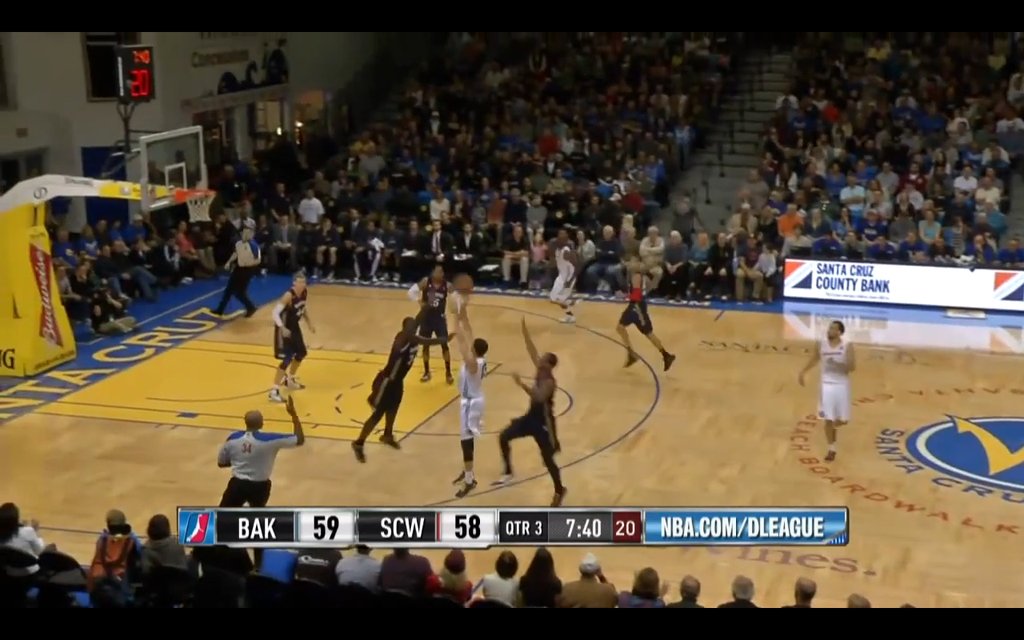 Granted, this might not be an issue for Curry at the next level. In an NBA system, he wont be asked to take 16.2 shots per game like he did with the Warriors, and he'll be able to pick and choose his spots more often.

Despite not having the speed or athleticism to routinely get into the paint, Curry's shooting ability is a big reason why he's capable of breaking defenses down.

As Adam Johnson, from SeaDubsCentral, discussed in a piece this summer, many of the top 3-point shooters in the D-League this past season failed to knock down shots from the top of the arc. The reasons being is simple: It's the furthest 3-point shot on the court and it's not necessarily a place where spot-up shooters will find themselves in a normal system. But being able to knock down that shot with regularity spaces the court even more.

For Curry, that's where he was most efficient from. Six percent of his total shots came from that spot and he made 48 percent of them, according to Nylon Calculus' shot charts. For that reason, defenses had to close out on him at the top of the key, giving him even more room to operate. While that didn't necessarily translate into a lot of easy looks at the rim for him, Curry did a good job of finding open teammates, whether they were on the wings or under the basket, once the defense collapsed. The Warriors put Curry in a lot of pick-and-rolls last season, too, and he proved capable of finding cutters to the rim or players spotting-up on the wings with skip passes.

With the Warriors, Curry averaged 5.8 assists per game and recorded four double-doubles. He also dished out a career-high 13 assists against the L.A. D-Fenders early on in the season.

Curry averaged 2.8 turnovers per game with the Warriors, though, culminating in an assist-to-turnover ratio of 2.05, which is far too low for a point guard. (For comparison's sake, Chris Paul, who is widely regarded as the best point guard in the NBA, had an assist-to-turnover ratio last season of 4.57.) The good news is most of his issues when it comes to turning the ball over are correctable.

The three biggest takeaways are as follows:

Curry's effort on the defensive end isn't a question. He clearly knows how to play defense -- he gets low, works hard, has quick hands, and knows where to position himself on help side -- and his 1.4 steals per game (ranked 16th best in the D-League) are a testament to that.

However, his physical limitations are what's holding him back from being a plus-defender at the next level. He simply doesn't have the lateral quickness to stay in front of opposing NBA-calibre point guards, and he doesn't have the height or strength to guard opposing twos.

Whatever team he ends up on is going to have to adjust accordingly. Against the Idaho Stampede, for example, who had two of the best guards in the D-League in Pierre Jackson and Dee Bost, the Warriors had Curry defending their small forward, Reggie Hearn, who averaged just 8.6 points per game. While he got away with that in the D-League, he might not be able to at the next level.

Curry has one, big translatable skill right now -- his shooting ability. The various ways in which he can knock down a shot, be it off the ball or with the ball in his hands, makes him an intriguing prospect, as it allows him to play two positions depending on the lineups. There are some legitimate concerns, of course, namely his ability to play defense at the next level and finish at the rim. However, it's worth bearing in mind that Curry would, more than likely, play the bulk of his minutes in the NBA going up against a team's second unit. That's not to say that those shortcomings simply evaporate into thin air; they just may not be as glaring.

Curry is still learning how to be a point guard, but he's getting there. Following his second stint in the NBA (a 10-day contract with the Cleveland Cavaliers) Curry looked like a different player. He scored 33 points in 26 minutes, including 15 of the team's first 40 points, and following the win he credited the Cavaliers' coaching staff for the improvements, providing further evidence of how quickly he learns.

All in all, for an up and coming team like the Orlando Magic, that is in need of floor spacers and already have a handful of elite perimeter defenders, Curry could be a great addition to their second unit. He still needs time to develop but he's showcased enough to believe that he could be an impactful player.