I tried to liveblog this game.  Doesn't look like too many tuned in.  Great game.  Not sure how the Wizards won, but they did.  Fort Wayne seemed to dominate the whole game, and all of a sudden, Dakota was leading.  No freakin' clue how it happened.  Sorry.

Blake Ahearn led the way for the Wizards, scoring 32 points and seven assists, including 16-for-16 from the free-throw line.  The Wizards played a solid all-around game, as six players scored in double figures.

The Mad Ants were led by Taj McCullough, who had 34 points.  Coleman Collins had a big game off the bench with 22 points and 10 boards in 33 minutes.  33 minutes off the bench?!? Why?  Because Chris Hunter picked up some early fouls and never did get out of foul trouble, being limited to just 21 minutes.  He had seven points, five boards, two blocks.  Hopefully he saved it all up for his Knicks tryout tomorrow.  Who isn't going to the Knicks tryout tomorrow?  Walker Russell, who has a dad that's a Knicks scout and uncle, Campy Russell is a Knicks legend.  He had 17 assists tonight, albeit in a losing effort.

To see my in-game thoughts, continue on.

Late start, due to some futurecast issues.

"He looks like a longer, in the face, Andre The Giant."  -- This is from one of the play-by-play guys in reference to Hamed Hadaddi, who has two fouls, two points in the first quarter.

"We have some Dakota fans here, they all stood up on that one!" -- Renaldo Major had a big dunk.  Assuming since he's from Chicago, some family came down.

"Blake Ahearn at the line for two automatics." -- Nine points thru the first, seven of them coming at the free-throw line.  Automatic's indeed.

"Renaldo Major has some real springs for legs" -- HUGE block, with the family watching.

"Ron Howard must read my blog.  He's dominating right now" -- 10 points thru the first quarter.  I called him out, he responded.  That's what the D-League is about.

"Marissa Whaley is making some great calls tonight" -- Via the color guy for Fort Wayne.  Boom Tho?

"I'll tell you, when you have good quality big people, you really need to drive some people, make some contact, make some people get in some foul trouble" -- From the PBP guy.  I don't know what that means, but Fort Wayne's making it happen.  Bigs for Dakota six fouls so far.

"Chris Hunter back in" -- I missed his first stint in the game, but the box doesn't look good.  Two points, two fouls, seven minutes.  Not good foreshadowing for tomorrow's tryout!

"Man the Mad Ants have ACTIVE hands tonight!" -- PBP guy.  Just like how he said it.  Wizards do have 10 turnovers though.

"Chris Hunter is still looking for an and-one" -- He just went up, missed it, got his board, and went through Renaldo Major.  He's strong.

"Renaldo's fan club exploded on that one!"  --  PBP guy. They didn't actually explode, but they were excited.  And why wouldn't they be?  Renaldo sliced through the lane, bounced off Chris Hunter, finished, and made Chris Hunter pick up his third foul.

"Side note, why no sound/commercials?" -- Not a fan of this. As much as I hate the same four D-League commercials, like them more than nothing at all.

"Ahearn just won an Oscar" -- Seriously, we were talking about this at the bar last night.  Nobody acts as well as Blake Ahearn in the D-League.  Luckily he's really good at free-throws.

"Oh man, I don't know how they missed that one.  Blake Ahearn clearly pushed off." -- From the color guy, whom I hated last season for his biased commentating on the D-League radio network.  Good to see things haven't changed. Also, his complimenting of Marissa apparently didn't help.

I hate these announcers. Soon as I come back from supper they were yelling.  I hate these guys.  A lot.  I am no longer cheering for you, Nightmare Ants Boss.

"That is not what I pictured him to look like... Did they say Eric Vaughn or Mo Vaughn?" -- Color guy is named Eric Vaughn.  He's big.

"AND A CHORUS OF BOOS ON... THAT!  It was a horrible call" -- In reference to a call that should have been offensive goaltending, but instead was called over-the-back.  Ridiculous. These announcers have zero upside.  Eric Vaughn is corrupting the play-by-play guy.

"Frisby with a dozen" -- Will is good. Currently 13 points and seven boards, but I guess a dozen is close, play-by-play guy.

"Walker Russell is excellent point guard.. He recognized that Taj McCullough is getting hot, so he passed it to him."  (Mo Vaughn) -- He's got 27 points.  If that's what it takes to be considered an excellent point guard, call me up.  I'm not even at the game and I could see he's hot!

Wait a second, can we go back to the constant muting?

"Ahearn is second to Frank Williams in making refs make calls.  He's a veteran."  (Mo Vaughn) -- He's in his second year.  Not quite a veteran.  And he got bodied pretty well.  Most of his fouls aren't fouls.  That one was.

"Heh, I mean Hamadi, he dunked on Hamadi" (Mo Vaughn) -- Coleman Collins dunked on Hamed Haddadi, or as I'll refer to him from now on, Hamadi. 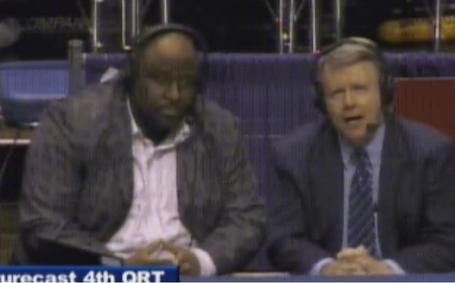 "That wasn't a China Syndrome Slam, but it sure had the effect of one" (PBP guy)-- I don't know what that means, but he said it after a big dunk by Coleman Collins.  Collins is good -- 16 points, seven boards.

"Boy this is a really coming out party for Coleman Collins and Taj McCullough" (PBP guy) -- They're playing well.  But both were in NBA camps.  This isn't exactly unexpected.  Taj kind of, but he's got the ability to dominate.  Saw that at Winthrop.

McCullough just picked up his fifth foul.  Doesn't bode well for the home team.  Wait, Jaren is leaving him in with almost five minutes left.  Where's Doug Noll when we need him?

Please don't mute during breaks that aren't commercials.  It makes it seem so awkward when watching people dance.

Guess the radio guys are reading this.  They are no longer broadcasting this game.  Can still watch though!

Sorry, my dad came and wanted to watch so I didn't blog the end.

Mo Vaughn revived himself, as he said the refs made the right call at the end of the game.  I'm surprised.