Share All sharing options for: Cleveland State injures my bracket; AKA: ONIONS: The Carlos English Story

Dakota's 5'9" fourth-string point guard is shooting less than 25% from the field and worse than 20% from beyond the arc.  That doesn't mean he doesn't have a shot - at least at winning your bracket pool. 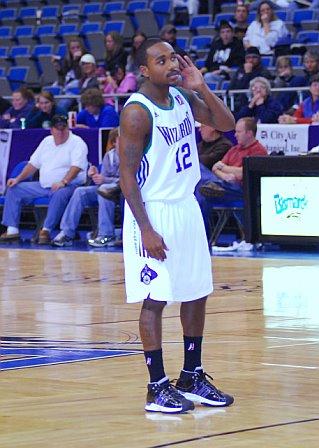 Yesterday, if you read the bullets, you'll notice I posted this gem:

I'm taking credit for telling you to write this one in early - Cleveland State beat Wake Forest by 15.  Wake Forest, along with Florida State, are the only two teams I'm missing in my Sweet 16. I'll blame English's fellow D-Leaguer's (Chris Ellis and Trent Strickland (Wake Forest) and Michael Joiner (Florida State)) along with poor officiating, which I'm increasingly getting used to.

Now, here's a little background on Carlos English.  English averaged 8.6 and 4.1 assists last year, his senior year at Cleveland State, starting the first 18 games before being declared academically ineligible.  Those are not good numbers.

This season, his rookie year with the Dakota Wizards, he's essentially the fourth string point guard. In his one start this season, English played 36 minutes, shooting 2-for-11 from the field, 0-for-5 from behind the arc, with three assists and no turnovers.  Unfortunately, that's not far off course for the season, as he's averaging 1.4 points in 7.6 minutes of action, shooting 25% from the field and 19% from the 3-point line.  Gross.

Watching English in games doesn't happen often, but when I do notice him, I'm not sure I like what I see.  He's a great penetrator, but he won't finish at the rim... not to say that he can't, but he won't - he dishes the ball while in the air right under the basket rather than shooting... 3-point shot is atrocious... sometimes wears arm and/or leg sleeves... not exciting while sitting on the bench.

Other notes from last night (some even related to the D-League!):