Promoted from the FanShots via Scott.  Check out WTLC, SBNation's OKC Thunder blog, for more great stuff from Mr. Pappagiorgio! 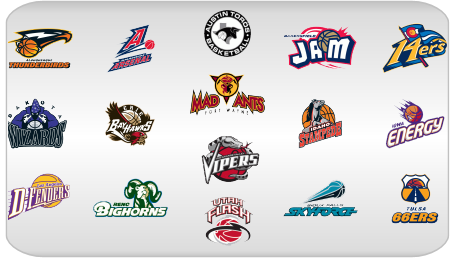 As a fan, what is often the first thing people take notice of, when getting interested in  and/or begin to follow teams? For me,  especially as a young lad, it was team logo's, uniforms, and colors. Two of those three aren't a huge issue for the D-League as they generally have a pretty nice assortment of team logo's and colors. The third, however, is a bit of a different story, and this is where I'm talking about team uniforms.

The uniforms that players in the D-League are required to wear night in and night out, seriously lack in style and diversity. Essentially each team wears a solid colored uniform with the same Adidas stripes down the side of both the Jersey and pants. The Jersey color is either white or the team's primary color and trimmed in the teams secondary color. There is also a team logo on the front, with name and number on the back, and the strange part about that is that the player names are under the numbers. I suppose the reason for that is so that they can put the NBA Team logo above the numbers if the player has been designated for assignment by an NBA team. The pants also have a team logo, and NBA Affiliation logo on the trunks.

I also realize that the D-League isn't exactly the draw that the NBA is, but the fans that dole out money to purchase season tickets (as this guy has recently done) and who show up for each and every game to cheer on their hometown teams, deserve better. Would the cost of uniform design really be so much that teams can't afford to have them done? Or was this decision a mandate from the league in an effort to keep things toned down so as to not confuse people about the difference between the D-League and the NBA itself? Seriously, the minute anyone steps foot into a D-League arena, I think its pretty obvious that you're not showing up to watch an NBA game.

My hometown team is the Tulsa 66ers, and if they'd have a had a much nicer uniform design, there is no question that I'd have bought multiple different jerseys, as I have for the state's new NBA team, the Oklahoma City Thunder. So as far as merchandising goes, I'm sure it's small potatoes compared to the NBA itself, but it would very much make a difference if the teams uniform's and merchandise in general had more personality. The D-League shouldn't underestimate the power of being unique, because to a lot of us, it makes a difference. But perhaps they have done enough research to know that the cost of making things unique outweigh the difference it would make in merchandise sales.

Anyway, the point of this post is, am I the only one that feels this way? Or do I just need to shut up and enjoy some great basketball and unbelievably low prices for the kind of seats we get to enjoy? I'm curious to hear what other D-League fans think, because for me, I feel like I'm missing out on what could be an even better experience than it already is.