Ladies and gentleman, boys and girls, children of all ages, Ridiculous Upside proudly brings to you the soon-to-be tag team champions of the World blogging-everyday-Garrett Martz's newest blog review. Now if you don't know who G-Martz is, or if you forgot because he hasn't blogged since I watched wrestling ('97ish), I forgive you. Actually, the last time I mentioned his blog was February 6th, and it was only because I was talking about how much access the D-League grants and I felt awkward with just a big pet-friendly poster as a post, so I nearly forgot about him. Martz is an account executive with the Fort Wayne Mad Ants.

Anyway, on to the story. Martz' most recent post gave me the idea for my post for today. Specifically when he posed this question as to the Mad Ants next head coach:

So the question is, would you rather have someone of local significance/ former NBA/NCAA player or a guy with a proven track record in the D-League who you have never really heard of?

Wouldn't it be great if there was a candidate that knows the D-League and has a history of winning AND is a former NCAA/NBA player? It would? Awesome! I know just the guy! 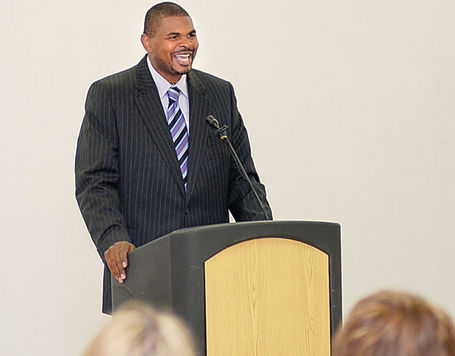 I call him coach. You might remember him as Mike from his 10 seasons as an NBA player. Or even perhaps for his multiple stints on an NBA bench as an assistant with Detroit, Milwaukee, or Charlotte. If you don't remember him, today's your opportunity, as I break down a coach who recently interviewed with the Fort Wayne Mad Ants, Michael Sanders.

Coach Sanders was a stud in college, attending UCLA and actually getting his degree (in History, no less). At UCLA, he played four seasons. His freshman season was forgettable, but once he made the starting lineup, he started to show his potential, averaging 13.6 points 6.3 boards throughout his final three seasons as a 6'6" forward. He was coached by Larry Brown for two of those seasons, one of the top coaches, well, ever. Two if his seasons ended up in the Elite Eight and championship game as well. Success as a player at the college level? Check.

Sanders was drafted in the fourth round of the NBA draft by the Kansas City Kings (who?!), but didn't make the team. Since the Kings didn't need his services, he went to a George Karl coached team in the CBA, the Montana Golden Nuggets. If Ridiculous Upside had existed back then (if I had existed back then), Sanders would have been getting lots of love on the call-up lists. 22.3 points and 8.2 rebounds, along with being named the CBA Rookie of the Year will do that. Minor league experience? Check.

The followin season, he embarked on a 10-year NBA career, mostly with Phoenix, before being forced to retire due to some injury issues. His career averages aren't great (8.0 points, 3.0 boards, 48% from the field), but to put together a 10-year NBA career after starting in the minors takes some talent and perserverence. Success transitioning from minor league to NBA career, and therefore the ability to connect with players at the D-League level? Check.

After his playing career ended in 1993, he eventually embarked on a coaching career. Sanders entered the coaching ranks in 1998 as an assistant coach with the Wisconsin Blast of the IBA. And went on as head coach with the Black Hills Gold (1999-2000) in the IBA. He was also head coach of the Washington Congressionals (2000) and Adirondack Wildcats (2002-04) of the USBL. Extensive coaching experience in minor leagues? Check.

We already touched on his NBA assistant coaching experience up top, so I won't get too in-depth with that. However, he did coach two of Fort Wayne's three NBA-affiliates, Detroit and Milwaukee, which is worth mentioning again - Certainly that should be attractive. NBA coaching experience? Check.

Coach Sanders was most recently the head coach of the Minot Skyrockets of the CBA, though wasn't given a fair shake due to some ownership issues, which eventually led to the folding of the league midseason. Regardless, he kept his head up, coached through it, and did the best anyone could be expected to do, considering the circumstances (no budget, no assistant coach, etc.) Though his tenure was short, he worked to positively affect the community as well, scheduling numerous speaking engagements each week, along with driving minivans loaded with his team on long trips to read to students in rural North Dakota. Yes, it gets more rural than Minot. He'll be involved in the community as well? Check, please. (Disclaimer: if you're not a frequent reader, I was the Director of Operations in Minot last season)

From my perspective, Coach Sanders seems to be everything a D-League team should be looking for. Now it just comes down to who is going to give him the opportunity. Isn't it crazy how that word, opportunity comes up in every story I post about the D-League? Mr. Potter, if you read this, I think this would be the perfect time to say "Coach Sanders, we'd love to give you an opportunity."