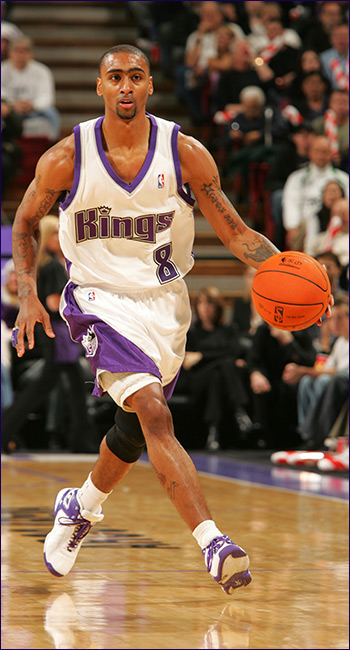 Quincy Douby, the former 19th overall pick of the 2006 NBA draft, has been called-up to the Toronto Raptors from the Erie Bayhawks.  In five games with Erie, Douby started three, averaging 18 points and not much else.

Douby, who I compared to Dahntay Jones when he was initially signed to the D-League had a very similar D-League stay.  After being cut by Sacramento, he signed with the D-League, same as Jones.  While he didn't play as well as Jones in his D-League stint, he didn't have as much time to get acclimated with his team.  Douby didn't have the greatest stint in the D-League, as the shooter shot just 30% from beyond the arc.  Regardless, in the two games I watched, I could tell he deserved to be in the NBA.

This was a great decision.  Rather than sitting at home, he went to Erie and kept himself in basketball shape.

In his first day with the Erie BayHawks on Wednesday, Douby showed it.

After a two-hour practice, the former Sacramento King shooting guard did some conditioning. With Erie assistant Ben McDonald instructing him, Douby ran the steps inside the Hammermill Center gym. Then ran from baseline to baseline a few times.

Then he did a few reps of running sideline to sideline. After reach rep, he took some jumps shots, rested for a few seconds and then ran again.

The above is from Duane Rankin, the Erie Bayhawks beat reporter, detailing his first day of practice.  Instead of coming into the D-League, thinking he was better than everyone else because of his draft pick status, he put in work and did what it takes to get noticed so he could get back into playing in the NBA.