D-League Playoffs: Are You Ready? Break It Down!

Share All sharing options for: D-League Playoffs: Are You Ready? Break It Down!

If I could write a mid-90's WWF blog, I would.  Unfortunately, I think that would get me even less readers than a D-League blog, so we're going to stick with RU for now.  Regardless, that music videos lyrics are what we're talking about today.

"Are you ready" for tonight's Selection Sunday, which undoubtedly will be the most exciting thing to ever happen on Easter Sunday? Disclaimer: it probably won't be that exciting, unless people join me here to comment.

Then let's "Break it Down", D-League style!

Here are my picks for matchups (Granted, I'll probably be wrong, but I doubt it):

Now, I will happily get to your questions.  Thanks for all the submissions, but I started this late and wasn't able to answer all of them.  Keep sending your questions (RidiculousScott (at) Gmail (dot) com) and I'll hopefully get to them soon!

From McCleary O'Leary in Pennsylvania: Why, Mr. Ridiculous, would Colorado pick Erie first!?  They've won four of their past five!

Ridiculous Scott: Well, Mr. O'Leary, it's because it seems to me that Colorado matches up very well with Erie.  Also, remember a couple weeks ago when Colorado was in Erie, where they won 119-103?

In that game, Erie held every 14er but Sonny Weems in check - other than Weems, no 14er scored more than 18 or had more than six rebounds.  Both teams turned the ball over 21 times and Erie actually got more shots up, the one thing Colorado seems to try to do every night.  Erie had all three of their big guns, Mo Rice, Ivan Harris and Erik Daniels combine for 65 points and 23 boards, shooting a respectable 46% from the field.

Erie played a great game, and still lost, while at home in Erie.  Colorado's 20-4 in Broomfield this season, 1,500 miles away.

Also, about Erie's recent wins: They've had two against Los Angeles, lost at Reno, and then just beat a Fort Wayne team that fired their coach.  I'm less than impressed, especially knowing they lost four straight before that.

From Norm Gorem in Utah: Yes! Bakersfield fell to us after losing five of their last six!?  This is going to be easy peezy lemon squeezy!  They stink worse than James Lang's jockstrap! Right, my beloved Ridiculous One?

Ridiculous Scott: In short, Norm, no.  Bakersfield is well coached and they have four NBA-caliber players - the same amount as the Flash.  Utah beat the Jam in Bakersfield in their March 31st meeting, 108-92 - it looks ugly, but in reality, it was not that bad.  Bakersfield led going into the fourth quarter, but then went ice cold.

Plus, Kosta Koufos went off and bang, game over.  While this could happen again, I have a feeling it won't.  The bench, which has some decent firepower on it, scored just eight points.  Bakersfield wasn't able to get any second chance opportunities either, which isn't typical of them - and shouldn't be against Utah, as their not the strongest rebounding team.  Plus, I'd be worried about Koufos being called back up for the playoffs.

Also, as for Bakersfield losing five of their last six, that's a bit skewed.  It started with an 0-2 roadtrip to Texas, which hasn't went well for many teams this season.  RGV with Jawad Williams, Jared Jordan and Kurt Looby were a very respectable team and then they went to Tulsa and lost - again understandable, considering Shaun Livingston and DJ White were with them at the time and they were playing well.  Next was the Utah game, which I just broke down and then a predictable win in Anaheim.  Last, they went to Idaho and lost two, where it's not easy to win, especially when you've already essentially clinched a playoff berth and Idaho's still fighting.

From Suzette Sirloin in Iowa:  I knew Dakota would be back for revenge.  Is there any chance that they can beat the mighty Energy, who led 105-83 in the last meeting?

Ridiculous Scott: As Billy Ray & Miley Cyrus might say, butterfly fly away.  Not sure how that's going to relate, but in an effort to be more like The Sports Guy for Mr. Abelson, I'm going to mixing in hip pop culture references at alll opportunities.  RU readers, if there's anything hipper than Billy Ray Cyrus, bring it to my grandma - she needs a new hip!

If John Edwards wouldn't have played the best twelve minutes of basketball in the first quarter since coming out of Kent State last game, that game would have more than likely ended up even closer than 130-120 scoreboard showed.  There probably won't be a 19 free-throw difference in favor of the Energy this game either, unless George Williams, Marat Kogut and Ben Taylor are sent to Iowa.

Dakota and Iowa played quite a few close games this season, and that was when Iowa was playing with a team that included Courtney Sims, the D-League MVP.  I have reason to believe future meetings will be close as well, as long as Blake Ahearn shoots a bit better and is able to get to the line more than ZERO times. As Steve Thomas of the Bismarck Tribune so eloquently put it the other day:

One long-time basketball observer described the sport as attempting to throw a bag of air through a small hole in the sky.  For Dakota Wizards guard Blake Ahearn, that hole has been small, indeed, this week.

Last, but not least, we've got a question from QuinFan4Lyfe90210 (I'm suspecting TorosGirl, but who knows!): Yikes! We're struggling! We've just lost Marcus Williams and DeMarcus Nelson to call-ups and now we have to play the Idaho Stampede in the first round!?  We're goin down, huh?

Ridiculous Scott: Slow down there, QF4L90210!  Quin's the coach of the year, he just got a haircut (I need pictures.. Is it a fauxhawk?  If no pictures available, IceMan, you've got work to do), and he somehow turned Ryan Bright into a near-triple-double getting machine last night!  Since Bright swatted three shots as well, however gingerly they were, I'm impressed.  Despite what Mizzou fans might tell you, Snyder can coach himself out of a paper bag!

See, Austin has this player, Malik Hairston, and he's apparently pissed that the Spurs released him to call up his D-League teammate - he's averaging 41.5 points since the Spurs released him.  That's not bad.  Plus, you still have Dwayne Jones.  In six games in March, he's averaging 21.3 points and 15.8 rebounds per game.  There's probably only five D-Leaguer's that have grabbed over 15 boards in a game this season, and Jones is one of them!  Plus, Squeaky Johnson played like I knew he could last night, scoring 25 points, dishing nine assists and turning the ball over just once.  Do not count Austin out!

Alright, I'm out.  Going to my aunt's for a little Easter dinner action.  Plan to be home by the time Selection Sunday happens, live blogging via the texts I get, as the D-League apparently wasn't able to get Rick Kamla and Freddy Finals away from gushing over Sun Yue tonight:

Finals:  Sorry Kamla.  I've been busy.  Haven't you seen my mustache I've been growing for this gig!? 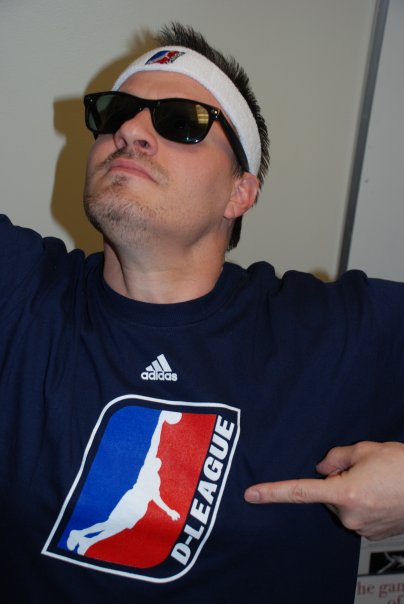