Will Jahii Carson Eventually Break Into the NBA?

Jahii Carson went from being a projected first round NBA draft pick in the 2014 draft, to going undrafted. After playing summer league with the Houston Rockets and not being added to an NBA roster, he's heading over to the Australian NBL for the 2014-15 season. Can he make it back?

Share All sharing options for: Will Jahii Carson Eventually Break Into the NBA?

Jahii Carson is an electric point guard with unexplainable explosiveness and quickness -- the problem is that he's also a 5'10 shoot-first point guard, and that's a tough description to shake. Ask Isaiah Thomas, who summed up the struggles on being undersized in the NBA, via slamonline.com:

That last sentence is the one that Carson needs to embody as he plays this season over in the Australian NBL for the Wollongong Hawks. The signing was first reported by The Sydney Morning Herald back on August 21, 2014 and I'm sure it's not the headline Carson had envisioned when he announced he would be leaving Arizona State University after two wildly successful seasons as their starting point guard. Unfortunately, Carson fell from a projected first round pick in the NBA Draft and actually went undrafted.

The reference to Isaiah Thomas was made because I think they share some of the same qualities and criticisms coming out of college as well. Thomas almost went undrafted as he was taken with the final pick of the 2011 NBA Draft, but he has flourished in the NBA game ever since -- though it hasn't come without struggle.

Battling against being under 6-foot tall is something Carson is going to have to get used to. There were seven players who played in the Association last season that were under 6-foot tall; only seven. That's 1.5 percent of the NBA. Only two of those players were regular starters (Phil Pressey started 11 games for the Celtics as well) and they were Ty Lawson and Isaiah Thomas -- that's only 1.3 percent of all starters in the league. The other five players combined to average 14.4 minutes per game, so it's safe to say they were used sparingly. Also, only one of those players went undrafted a la Carson -- Pressey.

The key for Carson is what his niche ends up being. Carson is not ready to be starter in this league, so he will need to develop while playing in Australia this season and improve in areas he lacks at this time. Last season at ASU he averaged 18.6 points, four rebounds and 4.6 assists with shooting splits of .433/.391/.719. While the assist numbers appear low, they are really that way by design because Carson had to "the guy" for the Sun Devils and he was relied upon for his high scoring output over getting others involved. 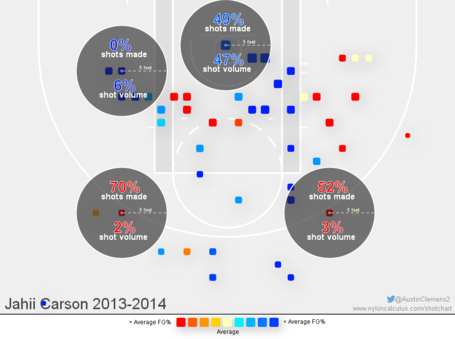 Carson is certainly able to breakdown any defense placed in front of him and penetrate the lane, but finishing around the rim was not his strong suit in college, and though he has a 47-inch vertical we can expect that problem would come to fruition in the Association as well. He is adept at getting to the free throw line as he went there 5.7 times per game last year but he wasn't able to take too much advantage as he only shot 71.9 percent from the line.

The first main area Carson must improve upon will be his outside shooting -- as an undersized guard you have to be able to knock down open looks and Carson only shot 39.1 percent from deep last year in college. The second will be his defense. This is not to say that Carson cannot play viable defense, but he certainly didn't show it in college and that will be needed for him to make the leap from Australia to the Association.

Looking forward to this upcoming season, he can certainly vie for the leading scorer crown in the Australian NBL as the top scorer in that league, Chris Goulding, put up 22.8 points per game last year. The third ranked scorer in the league, James Ennis, won the NBL Player of the Year Award and has subsequently been signed to a multiyear deal with the Miami Heat.

For Jahii Carson to make a similar jump next summer he will have to show that he's developed since his college days, but one thing is certain -- he will be one of the most exciting players in the Australian NBL.