D-League Preseason: Can It Really Get Better?

Share All sharing options for: D-League Preseason: Can It Really Get Better?

Thus far, we are five games into the D-League preseason with the final four on tap for tonight.  Here's my review based on box scores:

RIO GRANDE VALLEY (77) @ Austin (70):  This game had to have been atrocious!  This is definitely why preseason games happen, as the combined shooting percentage was just 35%, including 2-for-19 combined from beyond the arc and shooting just 58% from the free-throw line! It got even worse, as each team had 24 turnovers!  Delonte Holland's return to this side of the ocean was also terrible, as he shot just 1-for-9 (Which is BAD for a 2nd round pick).    RGV was led by Stanley Asumnu, who scored just 13 points.  For the Toros, the big Yawn Mahinmi had a predictably effective-yet-boring game, scoring 9 points and 9 boards, with 3 blocks, though he shot just 3-for-8 from the field.

Bakersfield (100) @ ANAHEIM (102): This game the teams were considerably less rusty on offense, but the defense for Coach Scott Roth's Jam is going to have to improve, as Anaheim shot 61% from the field.  In his defense, the starters only played the first half and I haven't been to practice, so maybe his defense is GREAT.  Judging purely by the box score however, it doesn't look like it. Mike Efevberha, who has the hardest name to spell in the D-League for the third straight season, hit the game winner for Anaheim and had a pretty good game for them, with 19 points and 6 boards in 27 minutes.  Both of these teams' rosters look really good, though I don't 100% agree with the starters.  Granted, it's only the preseason, but coming off the bench for Bakersfield was Jeff Trepagnier (proven at the D-League level and has been in the NBA for a few games as well) and Derrick Byars (Bakersfield's 1st pick and 5th overall).  For the Arsenal, both TJ "Don't Google Me" Cummings (Son of Terry) and Cedric Bozeman (Stud) came off the bench. These games also showed the weakness that is the bigs for the D-League this season, as Nick Lewis and Tony Key both started.  Not Impressed.  For all the talent on these teams, I think a trade is in order for a legit big!  I'd rather see a battle of Scott Roth-Paul Mokeski down low personally, and that's my Vance Palm Suggestion of the Week, as he is the VP and should be able to Make this Happen! Whether it's at the Showcase, All-Star Game, Etc, let's make this happen.  Who wouldn't watch this game:

All respectable, former NBA players save for K-Rice, though he was a CBA stud and makes the rosters work, as this roster is pretty guard heavy with no room for Pack.  Even Scott Roth says he played the 2 in college and the pros, but besides Mokeski, he was the next tallest D-League coach that I could play here!

IOWA (100) @ Tulsa (89):  I don't expect either of these teams to be great this season, though they aren't lacking a legit big man, so who knows where that will take them.  Actually, if Steven Hill and Chris Richard both stick in the D-League for a bit, Tulsa should be able to dominate, though I don't foresee that happening.  Number one pick Richard had a less than stellar debut for Tulsa, scoring 6 points, grabbing 6 boards, and picking up 5 fouls in 27 minutes, while missing both of his free throws.  Luckily, returning guard, 8th round pick, and starter (Which one doesn't belong?) Derrick Dial was dialed in from deep, hitting four-of-seven of his 3-balls to keep this game looking somewhat respectable.  For Iowa, their third round pick Othyus Jeffers, out of an NAIA school, led the team with 21 points, 8 boards, and 2 blocked shots.  That's huge for a 6'5" rookie forward.

The other two games statistics weren't reported, though RENO won their debut against Albuquerque, despite 28 points from Cheyne Gadson.  Reno's leading scorer was Antonio Meeking, who scored 27.  In the other game, Erie versus FORT WAYNE, played at Grace College, Ron Howard led the Nightmare Ants with 15 points in a 95-75 thrashing of the BayHawks.  I was hoping I was wrong about Erie, but if this preseason game is any indication, they might be in trouble, or Jeff Potter's Ants might be really good.

Also, as a bit of a preview for tonights games, here's what is featured on the Sioux Falls website, and Blake looks a little surprised to be there.   Either Sioux Falls media guy Brett Hansen knows more than we do or this was put together before the Blake call-up.. Hmm...  Also, big ups to Pizza Ranch! 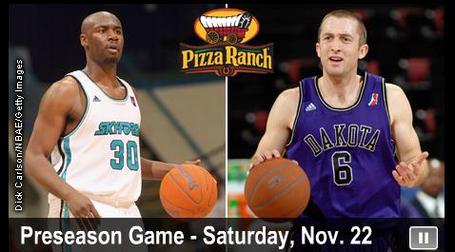