You Should SEE What Else The D-League Can Offer!

Share All sharing options for: You Should SEE What Else The D-League Can Offer! 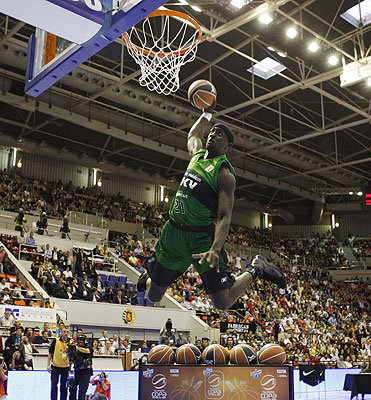 Amare Stoudemire is out for eight weeks after getting surgery for a detached retina on Wednesday night.  Phoenix Stan says "But here's the silver lining. The Bright Side. We are going to learn a lot about Amare by having him out."  I've got a little more silver lining for you, Suns fans.  After the success story that is Lou Amundson, along with employing former D-Leaguer Matt Barnes, why not hit the D-League up to fill Amare's spot for awhile?  Of course, you've already got Courtney Sims, but as Phoenix Stan told me earlier, we'll have to see what he can do in real life.

First, it sounds like back-up point guard is the number one option.  If you're going to look D-League, may as well look at the leading scorer, Will Conroy, who's played a bit in the NBA and is currently averaging 26.4 points and eight assists per game.  If Conroy's not what you fancy, I'm going to suggest Walker Russell Jr.  He had a tryout earlier this year with the Suns, but I really have him pegged going to the Knicks with openings and his dad being a scout there. Like he told me today, however, "It is a business."  On the season, Russell Jr is averaging 16 points and 11 assists per game.

I also know of a great prospect that is basically a Mini-Amare in the D-League.  Pops Mensah-Bonsu, who played 12 games with the Dallas Mavericks a couple years back before hitting the overseas circuit is currently dominating the D-League.

Mensah-Bonsu, who came out of George Washington undrafted, wound up playing/sitting/D-Leaguing it with the Mavericks his first season.  In the D-League that season, he averaged 15 and 10 along with becoming the All-Star Game MVP.  Then, after two years overseas, he came back this summer, playing for the Minnesota Timberwolves Vegas Summer League team.  He impressed everyone there, but didn't get an NBA contract, and thusly was on his way back to Europe.  After seven games in Europe however, the London native was injured.

When he reappeared, it wasn't overseas, but rather in the D-League with the Austin Toros.  So far, he's off to a torrid pace, averaging 25 points, grabbing 12 boards, and swatting nearly three shots a game.