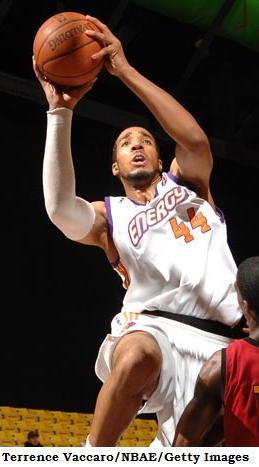 According to The Knicks Blog, the New York Knicks have been heavily scouting "shot-blocker" Courtney Sims, who has already played out two 10-days with the Phoenix Suns.   If they're looking for a shot blocker though, they should stick with Cheikh Samb.  If they want a solid big man with good length, limited but effective post moves, a fadeaway jumper, and great D-League numbers, they should go with Sims.  Definitely, go with Sims.

I shot Nick Nurse, Sims' D-League coach, an email this afternoon to see what he thought of Sims.  Nurse responded quickly with lots of good things to say:

"Courtney is a very talented scorer and is 6-11... he has tremendous touch and skill with his shooting and moves around the post... continues to develop new ways to score... has a good right hand jump hook, but his turn around is coming and his face up shooting, even out to three, will be very good eventually... if he continues to improve in the next 12 months as much as he did in the last 12, he should be playing in the NBA... has work to do with his running and strength, both of which are better than they look (and better than average), but he needs to get better in these areas."

That said, if Sims plays Tuesday night with the Energy in Bakersfield, I'd be surprised.

This would have been the perfect time to take a look at Patrick Ewing Jr., it'd seem, but after he recently sprained his MCL, that won't be able to happen for probably another two weeks at the earliest.

With Jermareo Davidson now out for the season in Golden State with a stress fracture that requred surgery, I would assume that Golden State could use Sims as well.  Both are long and athletic post players who can run the floor, rebound and block shots.  Both have a decent touch around the basket and can step out and hit the jumper if needed, although Sims jumper looks much uglier.

I would have actually preferred Sims to be called-up over Davidson earlier this season, and now, Golden State, you have the opportunity to right this wrong.  Keep with your love of the D-League.  Look how wonderfully Kelenna Azubuike and CJ Watson have worked out, both who dominated the D-League when you called them up!

Since it seems as though the Knicks are thisclose to signing Sims, I'd look for Golden State to take a look at Dwayne Jones or Chris Hunter.

Rod Benson, however would be my pick.  Since moving to Reno, the Boom Tho Movement, which originated in Golden State is in full effect.  Benson is averaging 15.6 points, 9.1 rebounds and 2.7 blocks in under 32 minutes of action.