Call Pops Mensah-Bonsu up, and other D-League stuff

Share All sharing options for: Call Pops Mensah-Bonsu up, and other D-League stuff 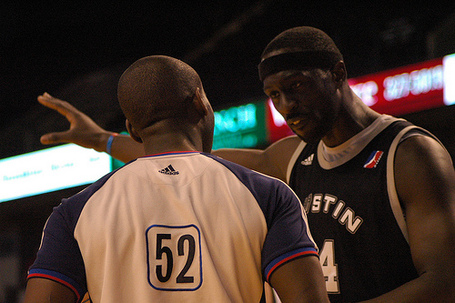 As much as you'd assume it was, this is not just an old post I moved back to the top.  As usual, I'm serious, call Pops up.  As in, this morning, before another team reads RidiculousUpside, 48minutesofhell, or the D-League website itself.  He's hot right now.

Yesterday afternoon, in a 131-124 victory over the Colorado 14ers, Mensah-Bonsu went off, scoring 39 points and grabbing 18 boards.  He also had four steals and made 13-of-16 from the charity stripe in his 46 minutes of action.  Seriously, 39 and 18, 35 and 14 at the end of regulation.  What in the World is preventing this dude from being called-up?  He's good enough to play on Britain's national team, but not good enough for a 10-day look?

Marcus Williams also had a pretty good game, scoring 30 points and dishing five assists for the Toros.  For the 14ers, eight players were in double figures.  Newcomer John Lucas III, who is probably better than the guy he's replaced, Eddie Gill, came off the bench to score 20 and dish five assists with just one turnover.  Not sure how they made it to overtime after starters shot like so: Billy Thomas 6-for-18, Josh Davis 3-for-10, Dominique Coleman 4-for-10, and Vernon Hamilton 2-for-8, but they did it.  Impressive, Colorado.

In the other game I didn't extensively cover, I wish I would have.

Reno was led by Damone Brown, who came off the bench to score 17 points and didn't pick up a technical.  Patrick Ewing Jr. had a frustrating night, apparently after he didn't get invited to the Knicks tryout.  Ewing scored seven points, grabbed seven rebounds, shot 1-for-9 from the field, had three turnovers, fouled, and picked up two technicals. Yikes!  Kansas' own Russell Robinson got the start, shot 1-for-8 from 3-point land had five steals, picked up five personal fouls and a technical.  Reno's coach, Jay Humphries, picked up two technical's as well, the last with 2:47 in the fourth.

Continue on for analysis that I don't dare put on the front page!

RidiculousUpside's most mentioned official, Marat Kogut, more than likely broke his own record, calling nine technical's in a 106-82 game between the victorious Idaho Stampede and hosting Reno Bighorns. Yes.  Nine technical's.  In one 24 point game.  I'm just as impressed as you are.  NINE.  Wow, Marat.  I think this is illegal for me to mention, and sorry to Vegas NBA fans, but I think Marat may have somehow had this in the Vegas sports books.  I can see him stopping at Terrible's, picking up some cheap breakfast, playing blackjack, dominating, and convincing the sportsbook to let him put his winnings on an over-under technical fouls bet on Sunday in the D-League.  +/- was eight, but Marat made sure there were nine.  Congrats to the Magic Man!