As a fan of the NBA Developmental League, I am excited to watch (hopefully, damn Futurecast) the playoffs unfold.  But the higher powers in the D-League offices have decided (and maybe rightly so) that my devout fandom was an exception to the rule.  Hence we have been blessed with a new Mascot to perk up our D-League interest: Freddy Finals.

Freddy was first introduced a few weeks ago as a shadowy figure with nothing more than a ridiculous biography and the headline Who Is Freddy Finals?  Curious indeed.

Who is this Character....ahh more D-League PR hilarity!

At first I was intruiged by all of this, then I actually read his "Bio".  Sweet Jesus.  Let me summerize for all of you, and save you the brain cell loss of reading through it.  Freddy Finals was born in 1982, and has existed in a world where he only understands his reality through the various facets of the D-League.  For instance, when asked about his favorite TV shows Freddy responds:

TV shows? Do they broadcast those on NBA Futurecast? I do tune into NBA D-League Central though.

And scene.  So apart from his time spent at "Harvard Law", Freddy Finals is like a real life Truman show.  Poor Bastard.

So in honor of Freddy Finals, aka D-league's newest "interest building PR tool", I have created a new batch Mascots that will help normal fans get excited about various aspects of the game!!!

So while D-league Fans follow along with Freddy's blog between the games, they can literally follow my new mascots during the playoff games themselves!

Straight from Freddy's blog: Are you "reddy" to get your Freddy on?  Not sure I feel comfortable with that question Freddy.

After the jump meet the new playoff mascots!!! 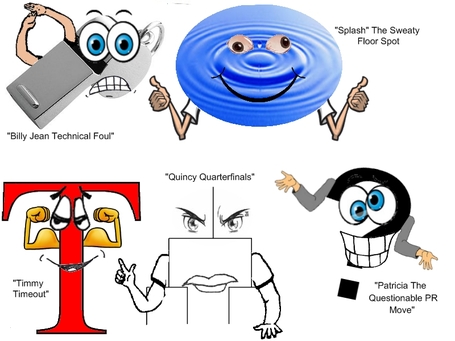 Born in Marat Kogut's basement sometime within the last 3 years, Billy Jean is a bit nervous and has a bit of temper.  Make sure not to rile this little fire ball up or she'll get you tossed!  With her hands continually in the technical position, you'll be sure to see plenty of players fall for her in the playoffs.  As of now she lives at Rasheed Wallace's house.

"Splash" is an especially relevant playoff mascot, as he happens to be much more present when players start caring and diving on the floor for loose balls.  Splash's favorite movie is Rocky Balboa, because it's just like him: slowly secreted by someone else's better efforts.  While Splash is a nice fellow, he also has a devious side, as he's well known for causing groin pulls and concussions if not properly looked after.  The best place to catch Splash this off-season is within a 10-foot radius of Jasper Johnson, whether he's on the floor or not.

Timmy Timeout is clutch, and you'll always find him at the end of playoff games. He's usually the first one off the bench listening to the coach.  Timmy will also dance a round a lot with D-League dance teams, as it is Timmy's job to get fans pumped with obnoxious rap music, players focused with screaming coaches, and people watching the Futurecast a chance to pee.  Timmy loves to be in any game that appears to be over, but the losing team refuses to give up.   The one thing Timmy will never do is go to Chris Webber's house.

On its surface a bracket seems extremely boring.  But now with Quincy Quarterfinals on board, the D-League playoff bracket just got a whole lot more interesting!   As a first cousin to Freddy Finals, Quincy has more teams involved in his round that Freddy does, but Freddy is always given more credit by the family.  Hence Quincy is a little bitter.  If he looks angry it's because he can never be as sexy as his cousin Freddy.

Patricia the Questionable PR Move is the illegitimate love child of this article and the Fort Wayne Mad Ant, and due to her genetic Moltov Cocktail she is continually confused, left-handed, and appears without warning on a yearly basis.  "Patty PR" as she's known to her friends, loves to adorn the front of T-shirts and beer coozies, and will often run ads in your local newspaper.   Patricia the Questionable PR Move's greatest accomplishment is her high level of unintentional comedy, of which she is unaware.