Anyway - since we haven't looked at much of the recent news involving NBA Draft prospects (which is now less than two weeks away), I figured today would be a great time to do just that.

From Chad Ford's Twitter account
Avery Bradley sprained his left ankle in a workout in Oklahoma City on Sunday. X-Ray’s and MRI’s given by the Thunder were negative. The sprain is considered mild to medium. Injury was bad enough that it’s ending Bradley’s workouts.

Hopefully his draft status was already firmly in place, or this is an unfortunate break.

Grizz Blogs: Tumble’s Rumbles: James Anderson Has Lingering Hamstring Injury
The group did not disappoint, although James Anderson’s lingering hamstring injury hindered his ability to get up and down and display the scoring ability that helped him average 22.3 points per contest this season at Oklahoma State.

"It is something that I’m trying to push through right now, but I will do the best I can and do what I can to showcase my skills," said Anderson.

This could explain why he's been said to be performing poorly in workouts.  He was matched up with Xavier Henry Sunday, one of his main competitors. 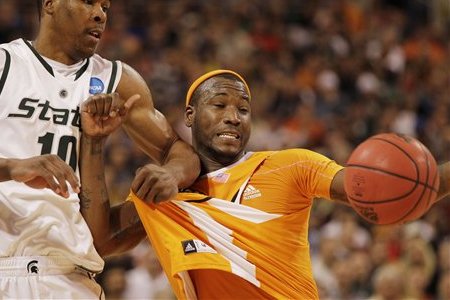 If Wayne Chism wore his headband lower, would he still be stuck with 15 stitches right now?

Chism was in New Jersey working out among 36 NBA prospects in a combine type of setting with 23 teams attending, according to his agent, Jared Karnes. Karnes, of Knoxville's Allegiant Athletic Agency, said Chism suffered the injury during a pick-and-roll and is expected to make a full recovery.

"Wayne is doing well and in good spirits,'' Karnes said. "He wanted to go ahead and continue to play, but they required him to see medical attention.

Getting 15 stitches above the eye due to an elbow is never a fun time - especially when working out daily is crucial in deciding what the future holds.

NBA.com: Knee injury hobbles DaSean Butler, but doesn't end his Draft dream
"I can tell them that [there is little risk]," said Butler, a 6-foot-7, 230-pound small forward originally from Newark, N.J. "But at the end of the day, that's a decision they have to make. For me, I just want to be picked. I want to play in the NBA, first round or second round."

It's the timing that makes his situation unique. A lot of players have been drafted after injuries, but Butler was hurt at the end of his senior season, in the Final Four, at the end of his college eligibility and without any chance to heal and go through the pros' road tests. If he had been hurt in a previous season, he could have returned for a statement campaign at West Virginia.Had he been hurt early in 2009-10, he could have at least been far enough along in the recovery to have a shot to make the Chicago combine and the subsequent tour of individual workouts leading up to June 24.

Butler got hurt April 3 while driving into Duke's Brian Zoubek near the basket with 8:59 remaining in the Blue Devils' 78-57 victory. The pre-Draft gathering was a little more than six weeks away and the Draft about 2 ½ months away. The calendar simply broke wrong.

There's a good article on NBA.com chronicling Butler and what' he's been able to do to try to keep his name relevant during the draft scouting process.

Matt Bouldin Ready To Contribute - Basketball News & NBA Rumors -
At the start of this process, Bouldin was limited by what he thought was an Achilles' injury.

"I'm glad that I actually got this injury fixed, there was a long time where we didn't really know what it was. I thought I had an Achilles' problem, I thought I had a tear in my Achilles' which would have been drastic, but it ended up just being a bone spur somewhere in my heel," he explained. "We went in there and we got it fixed and now I feel great. It definitely slowed me a little bit in terms of training more so than being out there and being seen. I don't think I got to hit it as hard as I could have early in the process."

Not being able to get into the gym hurt Bouldin and his first workout - the Minnesota group workout - didn't go as well as he had hoped.

"That first [workout] in Minnesota was probably my worst, I felt, just in terms of the way I played. But they just keep getting better," he said.

It's good that he's healthy now, but playing poorly in Minnesota might have hurt because a lot of teams went to that workout so they wouldn't have to bring those players in individually. Regardless, he's still been attending a fair number of workouts.

Scottie Reynolds show his stuff | SNY.tv: News
Yet the 6-foot Reynolds jammed his right index finger Thursday while working out against France's Edwin Jackson and wasn't sure he could make the Detroit workout.

Next week the former Villanova star is slated to work out for the Nets, Wizards, the Trail Blazers and Spurs.

It sounds like it was just a minor injury, but once again - if you're fighting to get drafted, no injury is a good injury.