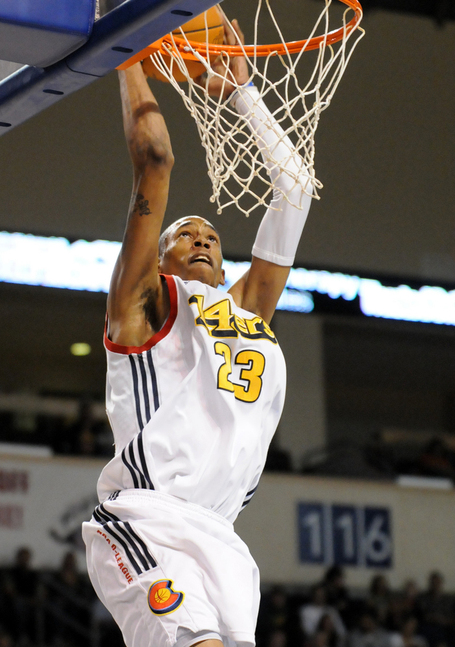 Photo by David Jennings of the Broomfield Enterprise

Remember me?  Sorry about not posting much the last few days, I've just been preparing for the RU offseason (and seeing this band).  One of the things Scott and I wanted to do was profile players we think will see Summer League or NBA action next year.  First up, Trey Gilder.

How he got here

DraftExpress doesn't have a whole lot on Gilder (or really anything at all).  He's a 6'9" forward who's a little on the skinny side (he's currently listed at 185, but that's even less than he weighed in college, and is probably still generous). Gilder bounced around a bit in college, playing at McNeese State and Tyler (Texas) Junior College before settling in at Northwestern State - and before you say "I've never heard of that school," I actually have heard of that school and been on its campus.  It's a pretty tiny college in Natchitoches, Louisiana (though it's pronounced, Nack-a-dish), which is in the west-central part of the state.

He came off the bench his first year at NSU, but put up solid scoring numbers at 12 points a game.  Gilder then moved into the starting lineup his junior year, and averaged around 16 and a half points on 48 percent shooting and just over six rebounds in 27 minutes a game.  He didn't take or make a ton of three pointers, and his free throw percentage was a respectable-but-with-room-for-improvement 77 percent.  Gilder's rebounding got a little more consistent towards the end of his senior season, though he also had occasional turnover problems.

He ended up coming to the D-League when he found out this fall that he wasn't eligible in the NCAA after a mix-up over his freshman season at McNeese State where he redshirted, Gilder had run out of basketball eligibility and thus signed a D-League contract.

How his D-League season went, after the jump.

Gilder started the season playing somewhat inconsistently, which shouldn't be too surprising.  One item of note, though, is that after the first two games of the season, his turnovers dropped.  He had five in each of the first two games against Albuquerque, but never had more than four the rest of the year.  He also showed flashes of rebounding ability, including grabbing seven boards in 16 minutes against Tulsa on December 20.

January, though, is where Gilder started to show his knack for scoring on a consistent basis.  Getting more playing time in the wake of James Mays's injury, Gilder put up double-digits in points in the last six games of the month.  That carried over into February, when he started to put it all together, including scoring 23 points on 15 shots, nine rebounds, four assists, two steals and a block against the LA D-Fenders.  RU started to take notice of Gilder at this point, and Coach Bob MacKinnon is quoted as saying

"Trey has been a constant offensive force for us. He's someone who can create his own shot and get his own opportunities, so at the offensive end I feel he's definitely a strong NBA prospect"

By March, Gilder brought his rebounding back into the mix, with double-doubles against Albuquerque, Los Angeles, Tulsa and Anaheim, including back to back games with a combined 34 points, 24 rebounds and only one turnover and two fouls in 63 total minutes.  Gilder's minutes became a little more inconsistent in April as Colorado had Sonny Weems to work into the rotation as well, but he also had his best game of the season on April 7 against Albuquerque, with 32 points on 19 shots, 12 rebounds (seven offensive) and only two turnovers and a foul in 31 minutes off the bench.  Gilder's role was further reduced somewhat during the playoffs, though he was still a solid contributor, making 65.4 percent of his field goals.

His body type is a little similar to Tayshaun Prince's (standout commenter TorosGirl has remarked, "Gilder is one of the lankiest people. It looks like one of his limbs is just gonna snap at any second"), though he doesn't have the outside shot or the defense that Prince does.  He still relies on his athleticism more than anything else to score, and Colorado's offense helped him out there by getting the ball inside a fair amount.

I believe Gilder made a good impression this year, though.  I wouldn't be surprised to see him back in the D-League next year as an assignee, in order to work on his shot or his defense, but I think whichever NBA team picks him is going to love having him on the roster.  I'll leave you with the rest of that MacKinnon quote:

"This year he's learned how to work as a professional and has earned great respect among his teammates. He's put himself in a position now that he's played a year of professional ball that he will have less of a learning curve in the NBA"