Actually, Atma did an incredible job of explaining this one, so I'll let him make the pick... after the jump! 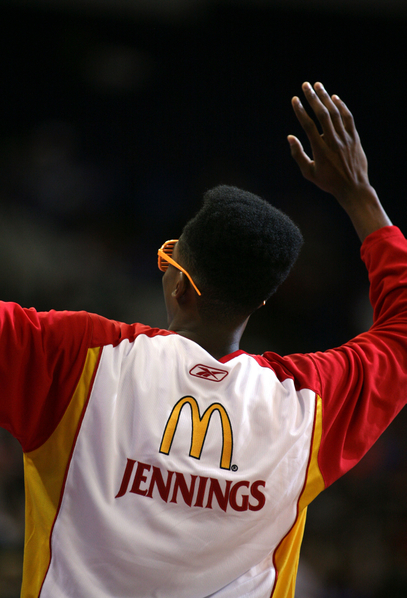 Based on the astute draft research analysis of ESPN's Chad Ford and the Mercury's Tim Kawakami it seems like the Warriors are down to a Fab 5 of Jrue Holiday, Jonny Flynn, Brandon Jennings, Terrence Williams, and Tyreke Evans. Evans is off the board and we all wish him the best of luck in Sactown.

The remaining four are all intriguing talents and I personally wouldn't be upset if the Warriors end up with any of them. But Jrue "TWDY Players" Holiday doesn't appear to be that pure point guard and wings aside from the elite 23 + 24 are a dime a dozen in this league. Flynn looks to be a solid, steady pro, but not a superstar, which is what the Dubs need. Williams, AKA "Gatorade-protector", could be the steal of the draft (or a trademark Nellie smokescreen), but at #7 that would be pulling a Raiders and Darrius Heyward-Bey (Editors Note: Burn). Maybe the Dubs can swing a deal and get him later in the draft though, if that's who they're targeting.

So in this draft, it's all about the people's choice - and the golden people have spoken: Brandon Jennings, welcome to the Yay Area! In the works of DJ Quik: "Because Oakland is just like Compton."  Jennings has (drumroll please)... RIDICULOUS UPSIDE.

I don't doubt that it will take Jennings a few seasons to get acclimated to the NBA. I don't doubt that pairing him with Monta Ellis is a defensive disaster waiting to happen. But that's not what draft picks are all about. For the Warriors, it has to be about fishing for a superstar who, at worst, can be a serviceable player in this league.