With the eighth pick in the 2009 SBNation Mock Draft, the New York Knicks, represented by Seth from Posting and Toasting, select... (Drum Roll please)

From Posting and Toasting: With the 8th pick in the 2009 NBA Draft, the Knicks select Jrue Holiday. With Rubio, Jennings, and Curry off the board, the Knicks look to a guy with a lot to prove and a year in a good system behind him.  Holiday hasn't been talked about as much as some of the others, but rumor has it he's beloved by Mike D'Antoni. Holiday's size and defensive instincts give him a leg up on the competition, but he'll need to show capabilities as a floor general moreso than he did at UCLA. With the gun-shy Chris Duhon and unpredictable Nate Robinson sharing his position, it'll take top-notch leadership skills for Holiday to distinguish himself. Holiday's no sure thing, but he's got worlds of potential.
In other news, expect phrases like "Jrue for two!" and "Happy Holidays!" to enter Walt Frazier's lexicon. Excellent. 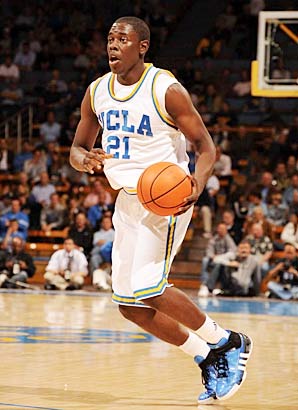 On the clock: The Toronto Raptors via a To Be Determined blog.