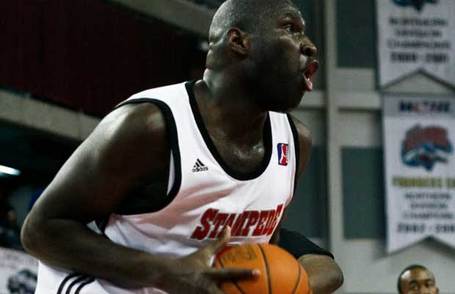 Last night, while missing all forms of mens basketball (I'm nearing two months of unemployedness - League Pass is not an option), I came across this article by Eric Koreen of the National Post about how much Nate Jawai hated the D-League.

It's crazy to read about how some players hate playing in the D-League.  Thomas Gardner, of the Atlanta Hawks, seemed to like the experience.  Hamed Hadaddi, in my limited, but lovely, dealings with the big fella, doesn't seem to hate it.  Ramon Sessions got a lot out of it.  Mo Almond actually wanted to come to the D-League.  See, with the right attitude, the D-League can be a very positive thing.

(Here's an entire list of players currently in the D-League that have played at one point in the D-League.  Pretty impressive that the D-League has helped that many players in their quest to either get to the NBA or stay in the NBA - vast majority at least as talented as Jawai.)

Jawai, this season, is making $442,000, having played in 15 games thus far, five in the NBA.  In the D-League, he averaged 12.2 points and 6.5 rebounds, along with getting into foul trouble and committing turnover's in the majority of his games.  His Idaho teammate, Lance Allred, is making $25,500 for this season, and averaged 18.8 points and 9.8 rebounds per game while Jawai was in town.  If Jawai is that great that he doesn't belong in the D-League, why did he gain 20 pounds mid-season?  Why wasn't he the best player on the team? Why was he consistently in foul trouble?

If a player gets assigned to the D-League, and has the right attitude, it can be a huge step in the right direction for the career of that player.  If he comes in with a bad attitude (see also: Williams, Sean), the D-League won't be the right fit.  Life is what you make it!

Continue on for my breakdown of the above referenced article.

"with the players looking to score as much as possible, the pace in the league tends to be faster than normal. Conditioning was the biggest concern for Jawai in Idaho, after three months of inactivity left him out of shape. Jawai said his ideal playing weight is 275 pounds, but because of his inactivity, he was as much as 20 pounds heavier than that earlier in the season."

Seriously?  He gained 20 pounds mid-season in the NBA?  Why don't more teams send their players to the D-League if they're not working out while on an NBA bench?  Why should the D-League guys give respect to an overweight player that's proved less than the majority of them have stateside?

Regardless, Jawai did expect immediate respect:

"Some guys were like, 'Man, he's coming to take my minutes. I'll be mean to him,' " Jawai, the Toronto Raptors forward, said Monday of his time with the Idaho Stampede.  "They wouldn't talk to you. If I said hello, they'd just look away. Just being rude. It didn't bother me one bit, though."

It sounds like it did bother him though, doesn't it?

When reading this article, it seems to me that Jawai came in with a bad attitude and twenty pounds overweight.  Of course this isn't going to equate to immediate respect from your team - to get respect, you have to earn it, and many members of the Idaho Stampede have earned my respect.

Jawai's frontcourt mate, Lance Allred, is an intelligent player, with experience at high levels overseas and last year in the NBA with Cleveland. His point guard, Kevin Burleson, played a year with Charlotte, if I recall correctly.  Luke Jackson's got plenty of NBA experience, playing in more games with the Toronto Raptors than Jawai has - and he had two starts.  Bryan Gates, Idaho's head coach, is revered as one of the best in the minor leagues and assistant Randy Livingston made a decent career for himself as well, despite some injury woes. Yet it doesn't seem, according to the story, like Jawai ever looked to get better in the D-League; to even learn from the experience.

Idaho's point guard, Kevin Burleson had 13 assists one game, 10 assists in another. Still, the article says:

with every player in the league looking for a call-up to the NBA, Jawai said guards were more concerned with scoring than distributing.

That doesn't seem to be the case if you look at Burleson having double digit assists twice in Jawai's ten games though, does it?

The story goes on to say:

that is the rap on the D-League: it bares little resemblance to the NBA, or at least the way good teams play in the NBA. And because guards have the ball the majority of the time, big men do not get a fair shake.

This is something else I don't agree with.  I'm not sure how anyone else can, either.  Unless you've watched the inordinate amount of D-League basketball that I've watched, I don't understand how one can go about making these assumptions.

I'd assume that a player or coach would be interviewed for their side of the story for this scathing review of a mediocre players 10 games in the D-League, but Mr. Koreen apparently didn't think that was necessary, as only Jawai was quoted, along side his musings on a league he's never watched.

Perhaps Jawai should take the advice of luminary Miley Cyrus - Life's what you make it.