Share All sharing options for: Dakota Wizards Looking for a Head Coach 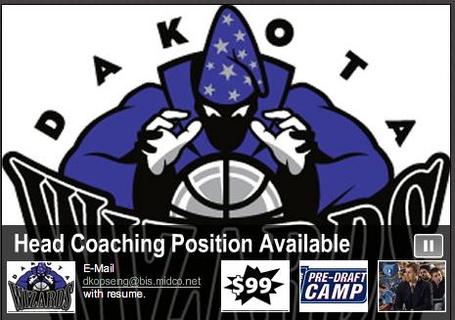 I don't exactly know what this means, but I'm assuming Duane Ticknor doesn't plan to get back with the Wizards or they'd rather him not come back. Either way, I'm assuming that the Wizards are, or will be getting, plenty of applications from coaches around the D-League as soon as they read this, as it's probably one of the better jobs in the D-League.

This is a job I know about better than most other jobs, simply because I'm based in Bismarck and, aside from my lovely years in Bemidji, I've attended a majority of the games. I'm well aware of what coaches they've struggled under (Jay Garmatz, Steve Tucker, Dave Bliss) and which coaches have done well (Dave Joerger, Casey Owens, Duane Ticknor) in their time with the Wizards.

Just looking at those names, the Wizards have done well with people from within the organization/area and terrible when they try to get fancy and bring in somebody new. I have no clue about Garmatz past, but Tucker was already a well-traveled coach in the minor leagues without a great record anywhere and Bliss, well, had a terrible past and was received terribly in Bismarck, even before his team was terrible.

On the other hand, Joerger is now an assistant with the Memphis Grizzlies, but before that, he was a great coach with the Wizards, and before that was general manager and assistant coach with a good idea of what worked, both on and off the court, in Bismarck. Casey Owens had a good season in Bismarck, but his contract wasn't renewed due to some perceived off the court problems, and it's doubtful they'd go back to Owens, who has been the assistant in Colorado for the past few seasons. Ticknor, well, he's a stud.

After the jump, I'll break down who is available, who I like and everything else you should know about the candidates the Wizards could bring in.