Share All sharing options for: Deena From Jersey Shore And Adam From Real World Watched An NBA D-League Game

So I was doing my usual watching of NBA prospects this afternoon, focusing on last week's Maine Red Claws game versus the Fort Wayne Mad Ants, when I stumbled upon Deena from the Jersey Shore sitting with Adam from the Real World.

At a freaking D-League game.

I know, I know -- You probably don't check Ridiculous Upside to find out about which C-List celebrities watch NBA Development League games, but when a Jersey Shore cast member and a Real World cast member somehow end up in Portland, Maine, and then watch a D-League game together? That's something I had to chronicle.

To my knowledge, the only other celebrities that have attended D-League games are the beat boxer in this video and a random hodgepodge of NBA executives. Oh, and Michael Jordan, but that turned out to be fake.

Maine won, by the way, beating the Mad Ants with a final score of 105-100 (and ultimately knocking them out of the playoffs).

Adam also wanted to remember the occasion so he tweeted the following:

@DeenaNicoleMTV and I at a Maine red claws game lol!!! Yes were matching, get off of us!!! http://t.co/XpQbjt4 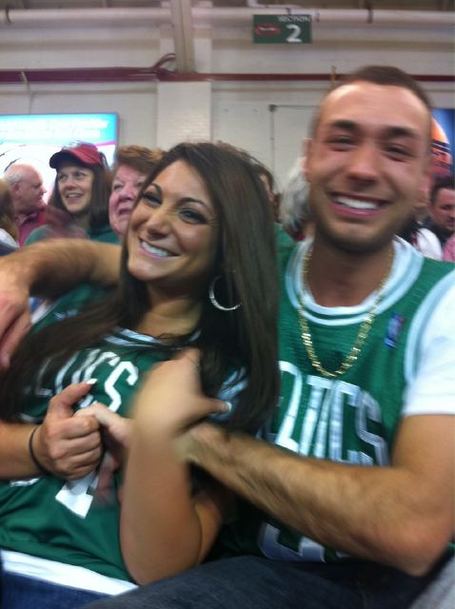