The 2011 NBA Draft is now officially less than a week away which means the rumors are getting hotter and heavier than things that are really hot and heavy. The Ridiculous Upside headquarters are buzzing with anticipation -- and that's not even a rumor!

The top item today isn't a rumor, but more a confirmation of something that previously seemed unbelievable, regarding future lottery pick Kawhi Leonard. And, more specifically, the fact that Leonard has gigantic hands.

At last month's NBA Draft Combine, Leonard created a buzz even without going through the workouts when his hand measured out at 9¾ inches long and 11¾ inches wide. That sounds pretty wild, but as they say in the photography business, a picture worth 1,000 words.

Thankfully, when Leonard was in Toronto for a pre-draft workout with the Raptors, The Score's Holly MacKenzie did what any good journalist would do and took a picture with of the San Diego State small forward's hand next to hers. The results? Kawhi Leonard might be an alien Let's go straight to the photographic evidence below. 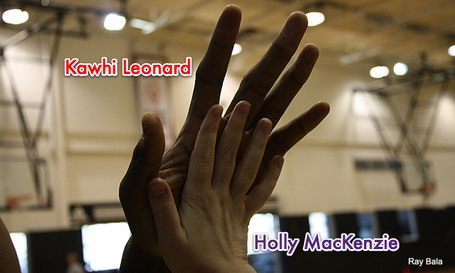 The biggest piece of news not relating to hands from Thursday is regarding Boston College's Reggie Jackson. One of the more intriguing players in the Draft due to the fact that he's been under the radar ever since the NBA Combine, it appears that Jackson won't work out with any NBA team after cancelling all of his scheduled workouts.

Most seem to think it's due to a promise, but its more likely still related to the knee surgery Jackson had in May.

Another player that won't be working out for any NBA teams the rest of the way is top-two pick Derrick Williams. Williams began and ended his pre-draft workouts this week with visits to the Cleveland Cavaliers on Tuesday and the Minnesota Timberwolves on Thursday.

Don't fret, though, fretters -- Not all potential draftees are cancelling their workouts! Top European prospect Jan Vesely will work out on Sunday for the Washington Wizards, Utah Jazz, Cleveland Cavaliers, Toronto Raptors and Detroit Pistons.

Notice that the Indiana Pacers, the holders of the No. 15 pick, weren't included on Vesely's list. That isn't surprising considering Vesely should easily be off the board well before the non-lottery picks begin, but I needed a transition to post the following quote that our friends at Indy Cornrows dug up from Larry Bird.

"I got it narrowed down from my end of it, to what I see, to three guys and I know either one or two of them are going to be there so I'm pretty excited about it," Bird said. "I know we're going to get a player that can come in and help us right away."

My money is on Jimmer Fredette being the front-runner on Bird's wish list.

In other news, everyone's probably going to want to check out the latest news on Julyan Stone and Jeremy Tyler's awkward moment.

Last, but certainly not least, first round prospect Tobias Harris was recently involved in a fight .... with water balloons.