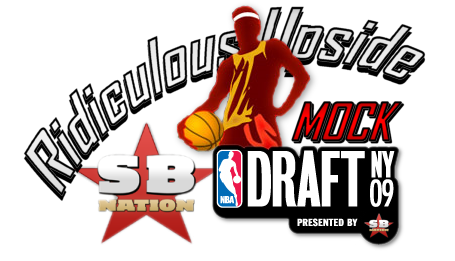 Made a couple of minor updates and got a sexy new graphic from our pal's at Welcome To Loud City.  This is perfect now.  Trust me.

Here is Ridiculous Upside's 2009 Mock draft, version 1.01, as the lottery in late May will certainly bring some changes, and we'll have updates before (like 4 hours later after a few minor changes led to some major re-shuffling). This is all based on our newest writer, Steven Neff's, instincts so far, along with minor modifications by myself and Jon L. We don't know yet who is putting their name in the draft for good so expect some of these players to go back to college.  As always, check out our Guide To Mock Drafts to answer any questions before any flambéing occurs.  After the jump we provide brief analysis on all 30 picks!

Also, any issues?  Leave feedback in the comments!

1. Kings - Blake Griffin PF (Oklahoma Sophomore)
Griffin is a complete monster, shown via his domination of all things college basketball, including the ladies. He will be the Rookie of the Year next year and will probably average around 16 points and 8 rebounds a game next year. Griffin, if paired with Kevin Martin, would wreak havoc on the NBA for many years, eventually  getting the Kings back to the playoffs if they get better pieces around them.  NBA Comparison: Carlos Boozer

2. Wizards - Ricky Rubio PG (DKV Joventut)
Rubio was already getting hyped when he was 14 years old. After a solid Olympic performance with Team Spain, scouts are still in love with him. The Wizards need a big guy but would not/could not pass up Rubio. He's young, gifted and a true point guard (and I think this means he's marketable!). NBA: Steve Nash

3. Clippers - Hasheem Thabeet C (UCONN Junior)
Thabeet is a rare player, a 7'3 center who blocks everything. Just his presence makes players flinch and blow easy lay-ups. He also can hit a 15-foot jump shot and is not a horrible FT shooter for a player of his size. He would definitely help the Clippers with their interior defense alongside Camby if they're able to trade Kaman this summer.  If not, this pick will switch pre-draft.  NBA: Dikembe Mutumbo

4. Thunder - Jordan Hill PF (Arizona Junior)
Hill is big, strong, athletic and willing to pound the glass and defend the post - you will have a man crush on him soon. He averaged 18 points and 11 rebounds per game this past season at Arizona - double-double's in college aren't easy to come by. The Thunder need young bigs and Hill would be a nice addition to the team, improving their low post game.  My favorite part? He says himself he has "Ridiculous" Upside. NBA: Al Horford

5. Timberwolves - James Harden SG (Arizona State Sophomore)
He is not the best athlete in the draft - he plays more like a crafty vet with high basketball IQ and strong fundamentals. Harden is not as good as Mayo was coming out, but he will be a good backcourt mate for Randy Foye starter in place of Randy Foye in Minnesota. NBA: Joe Johnson

6. Grizzlies - Tyreke Evans G (Memphis Freshman)
Evans is Neff's favorite player in this draft - "He could end up being the best player when we look back in hindsight." The combination of Evans, Mayo and Gay could get the Grizzlies to the playoffs next year. It sounds crazy but they have cap room and those three would compete with any team in terms of big three, plus they're loaded with potential. NBA: To Be Decided

7. Warriors - Brandon Jennings PG (Lottomatica Roma, Italy)
Jennings was rated by some people as the #1 player in the class of 2008. He has tons of talent, but ended up in Italy after his grades didn't live to Arizona's standards. He didn't do anything special in Europe, but we think he'll be a better NBA player. The Warriors play fast and Jennings just seems like he belongs in Oakland. NBA: Allen Iverson

8. Knicks - Ty Lawson PG (UNC Junior)
Mike D'antoni wants to play at high speeds and no one knows how to play fastbetter than Lawson. He's the type of point D'antoni likes - perfect for the Knicks  NBA: T.J. Ford

9. Raptors - Demar DoRozan SG (USC Freshman)
DeRozan is a pure scorer, as he can hit from deep or remind you of Vince Carter with his finishes at the rim. He was the best Freshman coming and improved at USC as the season wore on. Could he one day evolve into the 2nd coming of Vince Carter for the Raptors? If he can find some handles and bring some defense, the Raptors will be getting a steal. NBA: Vince Carter

10. Bucks - Earl Clark SF/PF (Louisville Junior)
The Bucks might need a point guard here but I expect them to re-sign former D-Leaguer Ramon Sessions. Bucks need bigger forwards and Clark can't quite fill that bill, but there won't be much drop off from what they have, allowing them to let Charlie Villanueva and his halftime tweets walk. NBA: Al Harrington

11. Nets - James Johnson SF (Wake Forest Sophomore)
The Nets need a small forward - nothing has worked out since signing former D-Leaguer Bobby Simmons to A LARGE NBA contract. He is versatile and can really score. He has a big body and will be able to help the young Nets right away. NBA: More athletic Andres Nocioni?  He baffles us

12. Bobcats - Gerald Henderson SG (Duke Junior)
IceManCometh's man crush will do well in the NBA. He has the skills that NBA teams covet and plays great defense. He should be able to push the Bobcats into their first playoff appearance. NBA: Latrell Sprewell, minus the crazy and yachts (wait.. Spree is already minus the yacht, so just the crazy)

13. Pacers - Stephen Curry PG/SG (Davidson Junior)
The Pacers and Jim O'Brien love shooters.  Curry is going to be a scorer in the NBA. He is going to come into the NBA and hit shots. His only major downfall is that he is undersized which we think will make him fall in the draft a bit.. NBA: Mike Bibby

14. Suns - Jonny Flynn PG (Syracuse Sophomore)
A good replacement for Steve Nash. He literally has ridiculous upside and can be a stud in this league. The only thing that worries us is his shooting. NBA: Damon Stoudamire

15. Pistons - Jrue Holiday PG/SG (UCLA Freshman)
The Pistons are starting to fall apart. Don't be surprised if Prince, Hamilton and Rasheed are not on the team next year. The combination of Holliday and Rodney Stuckey would be a good foundation to build on - and definitely fun to watch. NBA: Stuckeyesque right now, but has lots of room to develop into his own.

16. Bulls - DeJuan Blair PF (Pitt Sophomore)
Blair is a beast that will contribute in the NBA. He might need to lose some weight but people do not like to play against him - he'll seriously beat you up. The Bulls will benefit from his football build in the paint, as he'll make some room form himself to score. NBA: John Millsap (Disclaimer: I hate DeJuan Blair in the NBA. This is not my pick.  I don't know who it'd be but, anyone but Blair would suffice)

17. Sixers - Jeff Teague PG (Wake Forest Sophomore)
Andre Miller's contract is up and it doesn't seem like he'll be back.   Teague would have been a lottery pick earlier in the year - the Sixers are getting a steal as a replacement for Miller. Teague is very athletic and fun to watch - scorer first, but learning to be a distributor.  NBA: Russell Westbrook

18. Wolves (Heat) - Eric Maynor PG (VCU Senior)
He's crafty and has good size at the point. Steady leader who is best in the fourth quarter. Randy Foye is not a PG so they will look to draft and develop one like Maynor. NBA: Antonio Daniels

19. Hawks - Patty Mills PG (St. Mary's Sophomore)
Acie Law has been a bust and Bibby is on the decline and a free agent. Mills is speedy as they come, though we're not quite sure that's the Hawks thing after leaving Speedy Claxton on the bench to rot.  Regardless, his NBA stock has been improving every day since the Olympics.  NBA: Russell Westbrook

20. Jazz - Darren Collison PG (UCLA Senior)
We all know that Jerry Sloan hates his rookies.  Collison could grow on him however, as he's been a starter for about 23 years in the UCLA offense.  Sloan loves him some depth at the point, and Collison can definitely give him that.  This could be a big man if they think any of their free agents will leave. NBA: Chris Duhon

21. Hornets - Sam Young SF (Pitt Senior)
Young didn't get much pub this season for Pitt, but he should end up being their best NBA player.  He can play offense, but is probably a better defender, which should help the struggling Hornets out right away - as a Posey replacement?  NBA: James Posey

22. Mavericks - B.J. Mullens C (Ohio State Freshman)
Mullens is a long way way from contributing in the NBA. He is big and young though and can develop if he puts in work. NBA: A new (and improved?) Patrick O'Bryant

23. Kings (Rockets) - Austin Daye SF/PF (Gonzaga Freshman)
He's got the skillset that should make him a first round choice.  Unfortunately, his stock has been falling consistently since the McDonald's All-American Game.  Inconsistent motor, but don't write him offf. NBA: Luke Walton

24. Blazers - Patrick Patterson PF (Kentucky Sophomore)
Good low post skills and can really finish, though he's undersized. Patterson would be a steal for the Blazers if he falls this far. NBA: Jason Maxiell

25. Thunder (Spurs)- Tyler Hansbrough PF (UNC Senior)
Would be another great piece for this up and coming team. His hustle would make him a crowd favorite in Oklahoma.  Dude's a man. NBA: David Lee

26. Bulls (Nuggets) - Wayne Ellington SG (UNC Junior)
Ellington can shoot the basketball for a living.  He's got ice in his veins.  Ideally, he'll fill the Ben Gordon role, minus the shot creating madness that Gordon ocassionally decides he can do. NBA: Cuttino Mobley

27. Grizzlies (Magic) - Gani Lawal PF (Georgia Tech Senior)
Lawal has a great motor, he's a great finisher and anticipates rebounds very well. He didn't get much love this season nationally, but he can be the late bloomer we've all come to know and love. NBA: Tyrus Thomas

28. Wolves (Celtics) - Jarvis Varnado PF (Mississippi State Junior)
The Wolves have good scoring big men in Kevin Love and Al Jefferson, but those guys don't play much defense. Varnado was the best shot blocker in college and can be a backup who comes in and is a force on defense. NBA: Theo Ratliff

Williams is a slasher and extremely athletic. His problem is he can't shoot which will make him fall in the draft. He will be a good backup for the Lakers and play solid defense off the bench. NBA: To Be Determined

Daye could easily be a lottery pick because of his size and skill set for such a big player. I just don't think he is ready yet for the NBA and needs to add some weight and another year of seasoning at Gonzaga. If he stays in, somebody will take a flyer on him, and probably higher than this. NBA: Lengthier Marcus Williams