With the twenty-ninth pick in the SBNation Mock Draft, the Los Angeles Lakers (We know they sold it, but we're still putting this up because we felt like it), represented by Dexter Fishmore over at Silver Screen and Roll, select... (Drum Roll please)

With the next-to-last pick in the first round, assuming it hasn't been traded away by the time you read this, the Virtual Lakers select Nick Calathes of Florida. Woo... hoo?

You'll forgive Laker fans if their level of excitement for this year's draft is something less than feverish. Prospect hounds hither and yon seem to agree that the 2009 harvest is an uncommonly poor one, and even were that not the case, the end of the first round is never where a defending champ restocks for the repeat campaign. Draft day, after all, is the yearly occasion the NBA devotes to punishing the successful. You say you were the best player in the college game last year? Congratulations! Donald Sterling as a W-2 for you to fill out. Your franchise just won 65 games and a league title? Good for you. Now kindly chill for a couple hours while your vanquished opponents are afforded exclusive negotiating rights to the best prospects. Once they're done, we'll let you sift through the bargain bin for a little something for your D-League roster.

The institution bears the stink of Marxian class warfare and would no doubt make the Founding Fathers' blood run cold.

But back to Calathes. He's a 20-year-old nominal point guard who was the best player on a couple NIT Gator teams. Depending on whom you ask, he's either 6'5" or 6'6", which would normally mean that he's too tall to play the point in the Association; the Lakers' system, however, doesn't require or even really prefer a drive-and-distribute point guard in the classical mold. Phil Jackson has always had a fondness for tall, hybrid guards who can pass and defend - think Ron Harper - an archetype that Calathes fits into quite snugly. He needs to get stronger and work on his free-throw stroke, but his shooting from the field has been sound enough to suggest that the skills are there, and that improvement from the line will occur in due course.

And here's the best part: the Lakers won't have to pay him next year! He's headed off to Greece to play for Panathinaikos, which works out great for everyone concerned. The Lakers don't have any minutes for him yet and have better uses for their money than to pay a rookie benchwarmer. And in A1 Ethniki, Nick will face better competishe than he would in the D League. So while he's off doing the sorts of things all American postcollegiates do in Europe - growing unfortunate facial hair, learning to ride a Vespa and developing enthusiastic opinions about public health care - the Lakers will keep an eye on his evolving skills and, a year from now, decide whether buying out his Euro deal and putting him on a rookie scale contract is less hassle than negotiating with the Chinese government to keep Sun Yue in the States.

(Also, it will give everyone a year to learn how to pronounce Calathes, which I think rhymes with pilates. Please note, however, that I'm not entirely sure how to pronounce pilates either.)

Anyhow. Enjoy Greece, Nick. We'll call you when we need you. 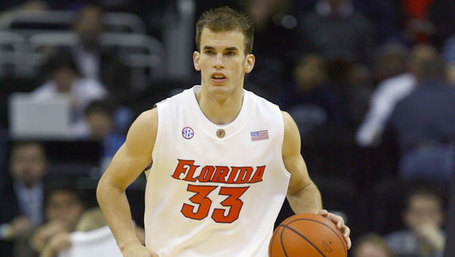