With the twenty-third pick in the SBNation Mock Draft, the Sacramento Kings, represented by SBN's very own Ziller over at Sactown Royalty, select... (Drum Roll please)

From Ziller:  At this point in the draft, there's no sense moving down if you see a player you like on the board: just erase the risk and take him. I feel that way about that bolt of a point guard named Patrick Mills. Even if the Kings do select a point guard (or a combo guard) with the No. 4 pick, it makes sense to add another here: this is a great PG draft, and let's hope against hope some other team tries to save Beno Udrih in the coming years.

Beyond his quickness, Mills has shown a great knack for scoring and passing. The Kings happen to need those attributes, along with every other positive attribute you could imagine. If not for his broken hand this season at St. Mary's, he could be getting lottery talk. Heck, he might even have been in the Jonny Flynn Memorial "The Kings are Choosing Who?!" role at the top of the draft. Seems like the right move down here. 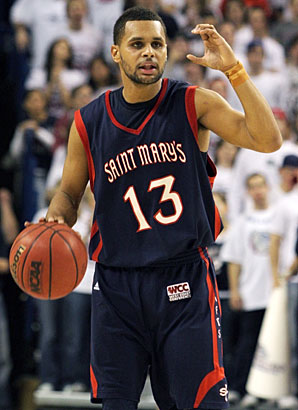