With the eighteenth pick in the SBNation Mock Draft, the Minnesota Timberwolves, represented by SBN's very own Canis Hoopus, select... (Drum Roll please)

From Canis Hoopus: B.J. Mullens. The most common knock on Greg Oden's heir to the Buckeye's pivot position is that he's just not ready for the big time. Too inexperienced, too raw, needs to develop his skills; pick one. The Timberwolves, however, already have two guys who can hold down the starting 4 and 5 positions, so they don't need a big man to step in a give them minutes right away.

Moreover, Mullens has the size that neither Kevin Love nor Al Jefferson possess. While the Ivory and Ebony Towers can hold down the fort, having a legit 7-footer growing up in their shadows might pay off big down the road. And that's regardless of whether Nikola Pekovic ever makes it across the Atlantic or not. If Mullens is on the board at 18, the Wolves shouldn't pass up an opportunity to add a center prospect with this much potential. 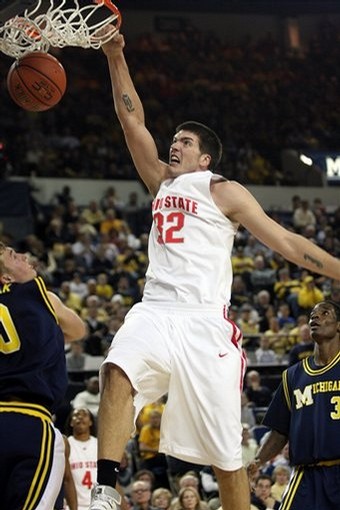